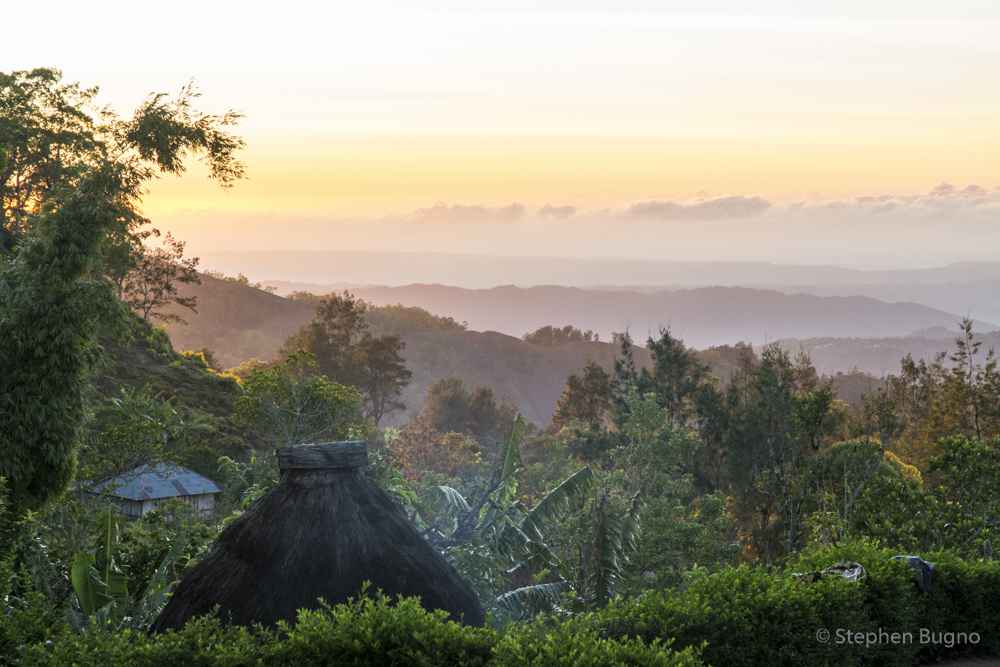 We came down the mountain from Fatumenasi in the back of a small truck, sitting on narrow boards which were laid across to act a seat. There were about ten of us in there, but more weight stressed the vehicle from the sacks of produce which filled the area where our feet should have been. Villagers were making the several hour journey to Kupang to sell their goods. A kilo of carrots fetches double the price in the city. Two foreigners attract a lot of attention anywhere in West Timor, Indonesia, but especially in this mountain village of about two thousand.

Normally two thousand souls might be considered a town, but Fatumenasi is decidedly village. The houses here are strewn along a few different roads and every family has a cow, pigs, or at least some chickens. The roads through the village are dirt and rocks, but at least they are relatively smooth compared to those leading the 20 km up to the village from Kapan. That road is crumpling asphalt, half washed away by heavy rains. This link is their only connection to the outside world. 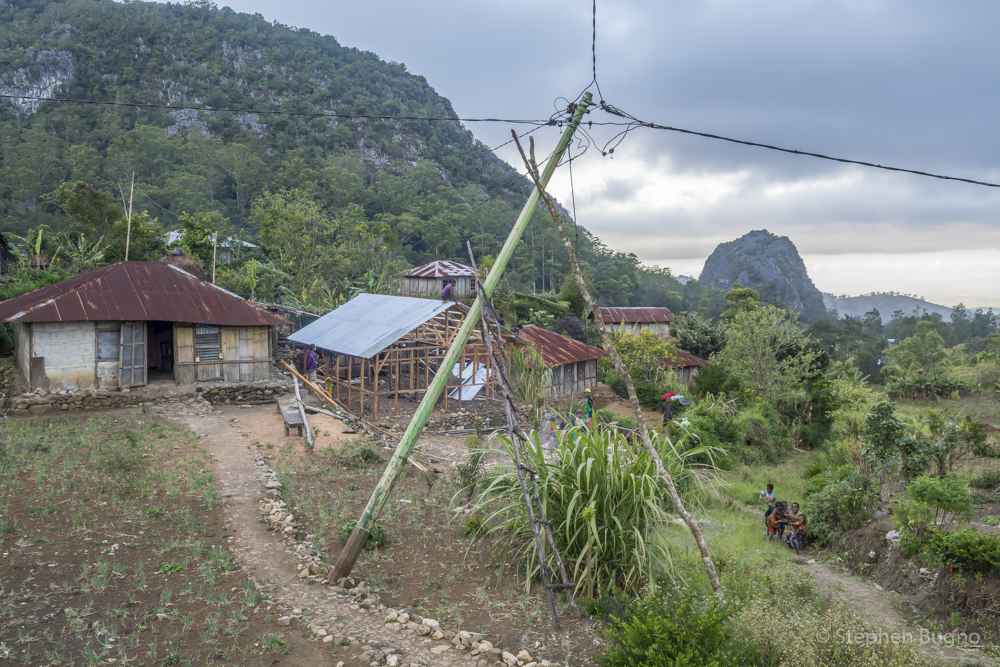 When villagers in Fatumenasi aren’t busy farming, they are drawing water from the well, gathering firewood, or socializing with alcohol. Or so, this we are told. We didn’t drink with anyone, but the doctor says they are fond of a generous pour of moonshine. These are Christians here on Timor, after all.

What the people of Fatumenasi are not busy doing, says the doctor, is visiting him for regular checkups. Or visiting him for any reason. Or brushing their teeth. He’s actually a dentist. He’s here by placement of a government program to establish medical personnel in rural areas. From Sumatra, he’ll be in Fatumenasi for two years. Based on his facial expression, he’s not happy about that fact. But it’s better money because it’s such a remote location. 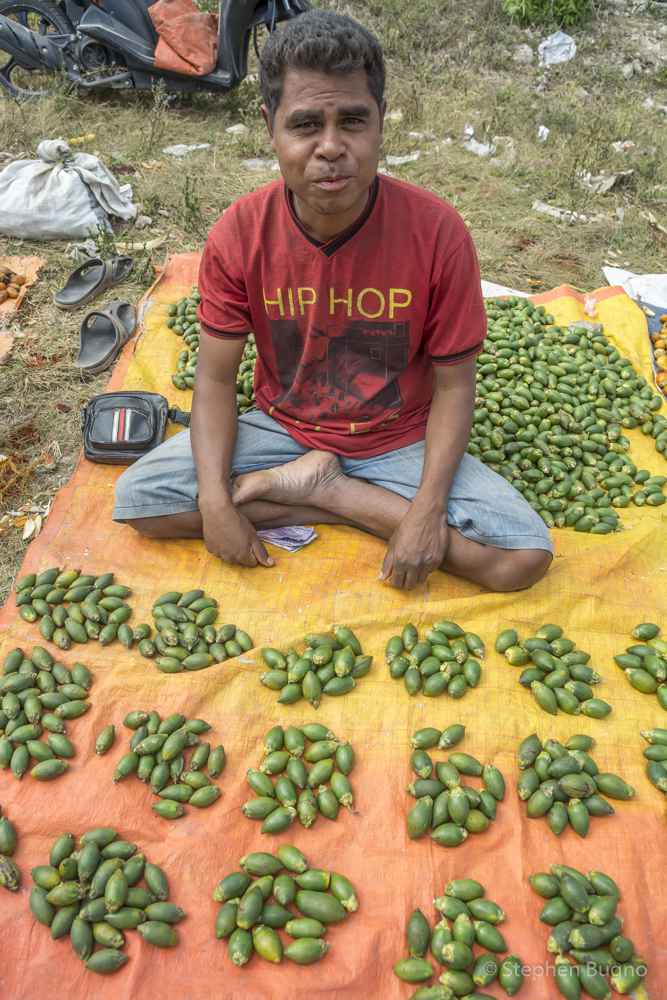 I joke with him that he has a tough job because the people here like to chew betel (areca) nut, leaves (paan), and associated lime powder. This ancient tradition is a concoction of natural stimulants that most non-users find disgusting. It stains the teeth and lips deep red and contributes to mouth cancer among other ailments.

He’s not fazed by my comment. He’s more eager to point out the fact that locals here refuse to make use of his medical expertise. He goes into the local school to teach about teeth brushing and other oral health and hygiene issues, but people couldn’t seem to care less. They won’t visit the doctor, whom he works with, either. They prefer to check in with the “wizard” as he phrases it in Bahasa Indonesia, the common tongue that he and my travel mate are speaking. A more reasonable interpretation of “wizard” might be “medicine man” my friend tells me. 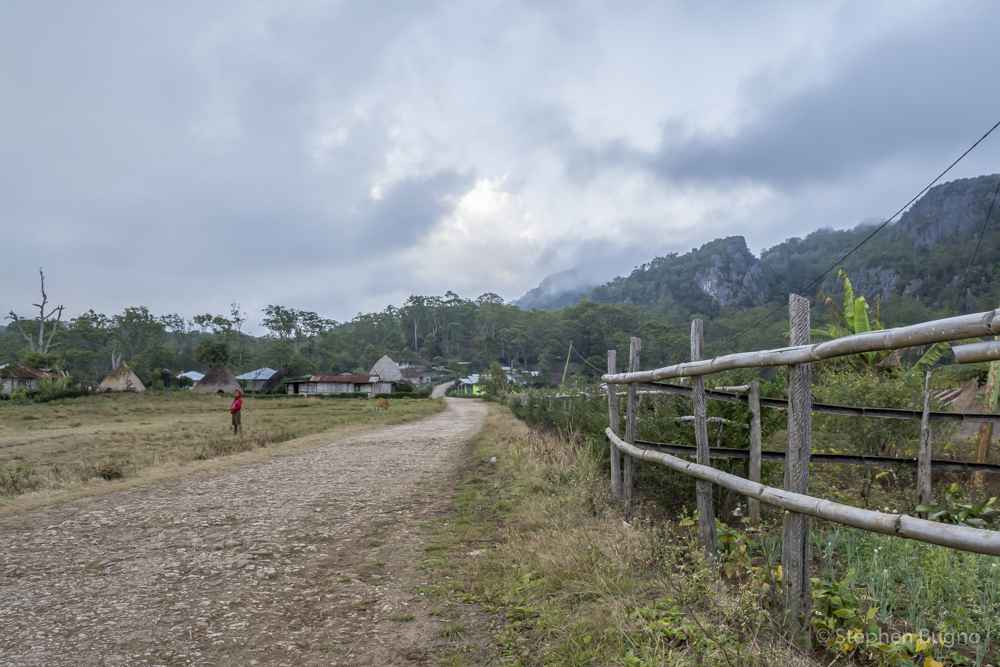 After a colorful sunset filled with puffy clouds in the distance and views that stretched far into the valley below, we returned to our home stay. We were spending the night with Mattheus Anin. He is royalty, grandson of a King. But his property, at first glance, wouldn’t suggest it. We stayed in one of three guest huts–circular, thatched roof huts with earthen floors. There were three single beds inside with mosquito nets draped around them even though it got far too cold at night to battle mosquitoes, or any other insects for that matter. The inside was dark even during the day time and the only way out was through a very short door. At night a single electric bulb illuminated the inside adequately. The toilet was a separate structure, with a concrete floor and porcelain squat toilet. 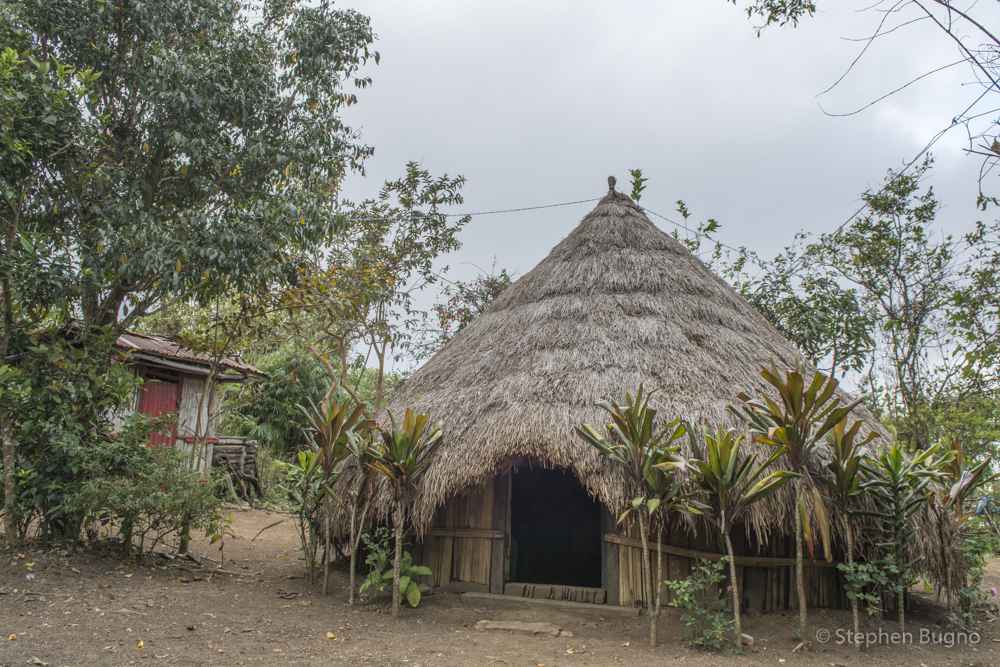 About an hour after dark, dinner was served. Pak Mattheus called us into the kitchen, which was a larger circular structure with a thatched roof and slightly larger entrance way which didn’t strain the back quite as much. There was fire burning in the middle and it was dark and smoky inside. Ears of corn were hanging above the fire curing. Dinner was set out on a table and were were told to help ourselves along with Pak Mattheus. We ate steamed white rice, spicy green beans with dried anchovies, and three layer pork served in liquid pork fat. Did I mention the people of Timor are Christians?

We were careful not to eat all the food, knowing that the others were waiting until the guests and elder men finished eating. They would take what was left, as is the custom here. There was nothing much to do after dinner so we went to bed in order to get up for the sunrise the next morning. 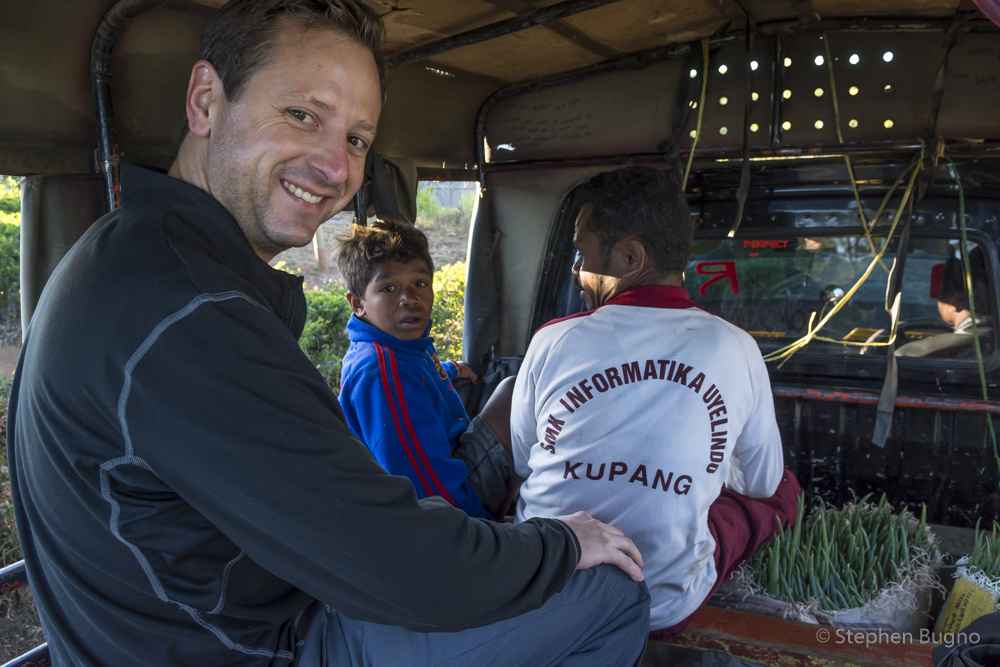 This is my second time to Indonesia and I was happy to get off the beaten track. My first time to Indonesia I surfed in Bali, observed the orangutan in Kalimantan, visited theSri Sultan’s Palace in Yogyakarta, went snorkeling on Kanawa Island, witnessed sunrise over Mt Bromo, and was terrified by Komodo Dragons.

Check out the archive at GoMad Nomad for more travel articles about Indonesia.