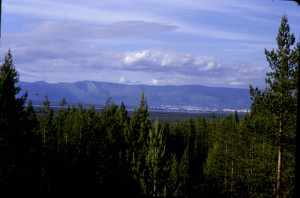 The Khibiny Mountains of the Kola Peninsula, Russia

Train travel evokes emotions unlike that of driving or flying. There’s a feeling of being removed from the landscape, but at the same time part of it. I can’t stop the train. I’m moving and so is the world outside. Is this a unique land or do I just have a unique perspective?

I walk out of my lonely cabin and stand in the aisle pressing my face against the window pane. The upper portion is cracked open and my short hair is blowing wildly. My eyes are fixed on this other world—the one that I’m passing through at 50 mph.

At every station stop I jump out onto the platform and see what’s going on. Amidst the greeting kisses and tearful goodbyes, vendors of all ages are selling food and drink.

Young girls with styrofoam coolers hanging from their neck call out “morozhenoe, morozhenoe” in musical repetition. Five rubles buys me one of their small vanilla ice-cream cones. Another train headed in the opposite direction screeches to a stop and more weary passengers float over to the apron-clad babushkas selling potato and cabbage piroshki.

I weave quickly through the commotion, making my way to the drink stand. I order two half-liter bottles of Baltika and hand over less than the equivalent of a dollar. “One for now and one for later,” I think to myself. The beer label proudly advertises “no less than 8.0% alcohol” so I know I won’t have any problems falling asleep.

I’m running out of time, so I grab hold of the hand rail and take the giant step back on board the Soviet-era monolith. We pull out of the station and as the train regains its momentum I stroll about the narrow wagon, bottle in hand, as a attempt to fit in. Behind the pine forests I see the blurred orange sun. It’s nearing the horizon, making me think it will soon set. But the darkness is only teasing. We’re too far north and it’s nearly summer.

I’m traveling alone, battling my introverted nature, looking for someone to talk with. The conductor is too busy, but answers my questions slowly and clearly to make sure I understand her Russian. She double checks to see that I’m aboard before we leave each station. After getting me a cup and saucer she keeps the coals burning under the samovar next to her cabin. I turn the silver lever and boiling water gushes out to make the perfect cup of tea.

It’s 2:30 am before I know it and we’ve just pulled out from Petrozavodsk. I can’t take myself away from the window. Now I’m lying flat on my stomach from the top berth of my closed cabin. I’m obsessed with the ambiguous sky, wondering whether it’s dawn, or dusk, or just in-between that makes the Karelian sky this mix of orange, red, blue, and purple.

The landscape here is a vast wilderness alongside Finland, where lakes, swamps, and forests make a paradise for mosquitoes and others who love the outdoors. We roll through it, and I fall asleep to the repetition of the clanking and smoothness of the interspersed easy jolts.

I drift asleep and wake a few hours later. We’ve just passed a station called Polarnie Krug, literally Polar Circle. I’m celebrating the occasion with more empty calories in a brown bottle labeled Baltika. This is my first time crossing the Arctic Circle, but there’s no one to share my enthusiasm with. It seems it’s just another stop along the way. Soon, the Khibiny Mountains appear on the opposite side of a lake. I’m finally in Kola.