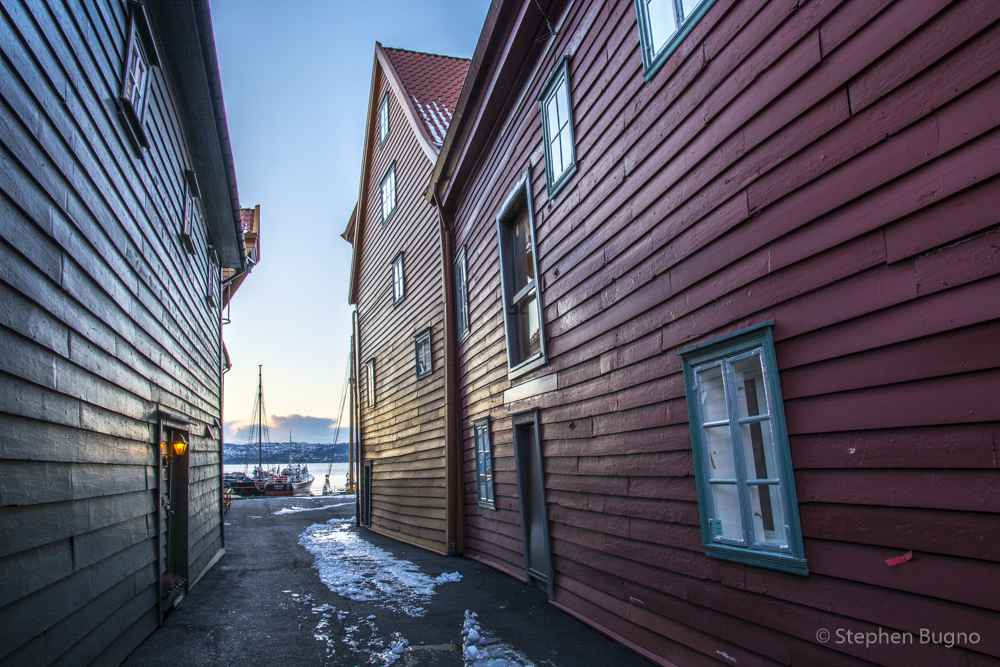 A Walk Around Bergen Norway

It’s usually raining in Bergen. But I came in the winter. There were clear skies the whole time I was there. Bergen is a beautiful city to walk around. Homes are built up on all the hillsides with views over the lower city and inlets. In winter, sidewalks are full of packed snow and ice and the air temperature, at about freezing, has enough moisture to give you a chill.

Bergen is pleasantly situated on the western coast of Norway and is known to foreigners as the gateway to the fjords. But to Norwegians, Bergen has a reputation for the arts. Theater, art, and especially music is thought to be Norway’s finest and most influential. In fact, virtually the only thing I knew about Bergen before I came was that it was the home of the Kings of Convenience. What I enjoyed most during my couple days there was just walking around and photographing the old houses.

I stayed with a guy named Kristian who was recommended to me by another guest-house owner who was full that weekend. He was cool guy and we talked a lot, only after I had already checked out and returned later in the day to pick up my bag. He’s got a bunch of rooms for rent and they were all empty except mine and I got the impression he didn’t rely on rent money to pay his bills. He’s actually a pretty established musician, told me he had recorded a few weeks earlier with Lou Reed’s bassist. His house was built in 1703 and is at a good vantage point close to the top of a hill in central Bergen.

On Saturday morning a long line led out from the funicular entrance. Families, couples, and friends waited with their skies and sleds. Having ridden the funicular to the top on the mountain above the city they would slide or ski back down into the middle of Bergen. We warmed ourselves up with a hot coffee and then wandered through the oldest part of the city. I like Bergen for many reasons, but the colors of the houses — usually red, yellow, or white — is a good place to start.

Read more about how I flew to Europe for $136 for my 2015 Eurail trip which began in Norway.