Photos from the Road: The Temple of Borobudur at Dawn 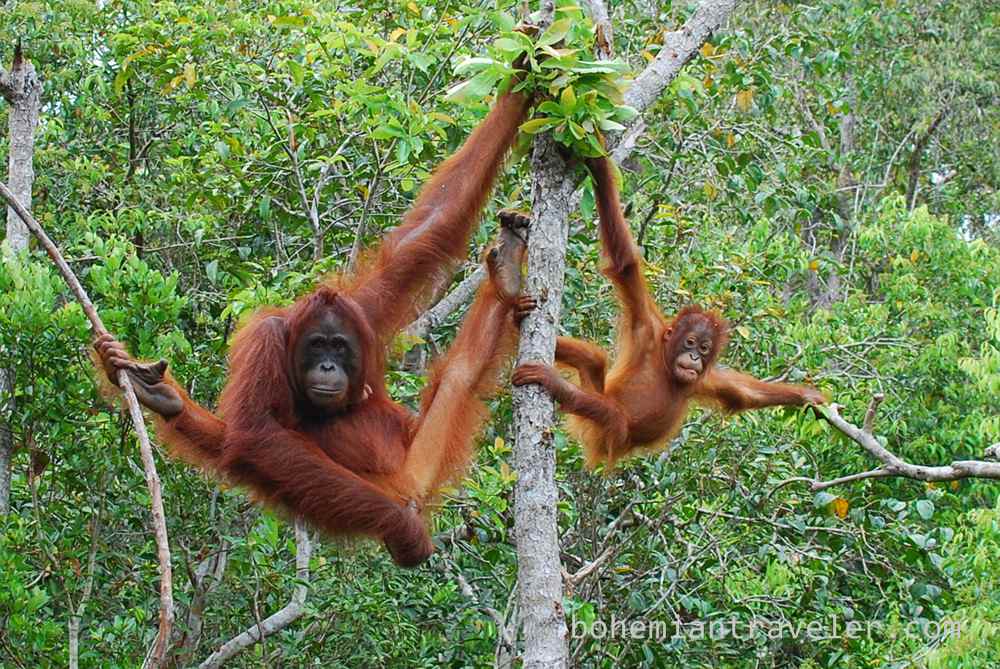 To the world it is known simply as Borneo. The third biggest island in the world. Home to the famous gentle man of the jungle—the orangutan.

To Indonesians, it is Kalimantan—the Indonesian part which makes up the majority of the island’s land area. The rest of the island is diffused into Sabah and Sarawak, the provinces of Malaysian Borneo, as well as the Sultanate of Brunei. Last year I visited these parts of Borneo, but wanted to return to explore Kalimantan. I got my chance this year with the International Blogger Trip to Indonesia.

The mere mention of Borneo is enough to excite the imagination. This is a land of headhunters, deep jungles, and dugout canoes in great rivers. It’s home to the world’s biggest caves, exotic wildlife, and world-class diving.

But the orangutan alone is reason enough to visit this tropical island. Although I’ve only seen one before in the wild, I knew that I wanted a chance to see more. 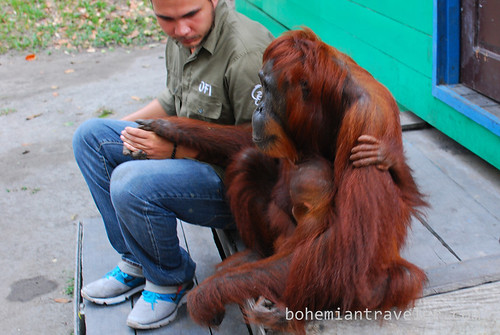 There are only about 60,000 orangutans left in the world. Most are on Borneo, in parts of Malaysia and Indonesia, as well as on the island of Sumatra. The orangutan is one of the four great apes, along with the gorilla, the chimpanzee, and the human. Any amount of time spent observing these “people of the forests” as their known in Indonesian, will reveal an uncanny array of human-like habits. It’s nearly impossible to not be mesmerized by their itching, eating, and caring for their young.

The biggest threat to the orangutan is the human. We continue take away their habitat by destroying the forests in favor of agriculture. The biggest culprit is oil palm plantations. Indonesia is the world’s biggest producer of palm oil.

Orangutan also have natural enemies like the clouded leopard, the python, and the cobra, but these pose much less of less of a threat than we humans. 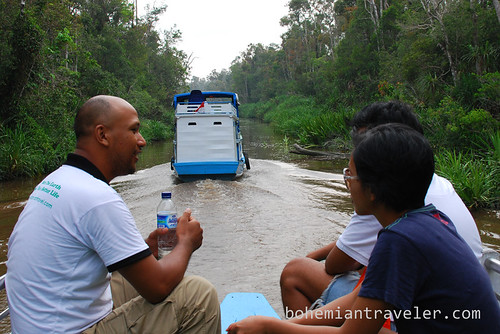 riding the klotok, a river boat in Kalimantan, Indonesia

How you can help

Basically awareness is the first step. We are part of a global world and we need to understand the challenges we are facing in the 21st century. A growing population demands a larger food-supply and the land to produce this food.

International organizations like Orangutan Foundation International are dedicated to the protection of the orangutan and its habitat. Donating money is one way to help. Donations go towards the purchasing and protecting of forest and to the rehabilitation of orangutans.

During our trip we spent a day with Frederick, son of Dr. Biruté Mary Galdikas, who founded OFI and has studied the orangutan for decades. He grew up with the orangutan as his friends. He still has an amazing connection with them and at one point when we were on our way back from watching a feeding, one of the mother orangutans took him by the hand and sat next to him.

Will tourism help the Orangutan?

While we cruised upstream in our klotok (small river boat), we talked a lot about the effects of tourism on the orangutan. Although tourism continues to grow, I think it remains beneficial to the orangutan and the local economy. It’s obvious that tourism raises awareness for the species and boosts employment numbers. 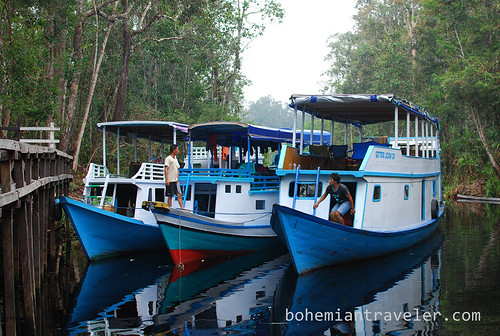 Klotoks on the river at Tanjung Putting National Park Indonesia

It’s also apparent that there is a threshold for tourism numbers due to the fact that it is a sensitive ecosystem. For the time being, I’d say get to Tanjung Puting National Park while it’s still relatively accessible and affordable.

Comparing wildlife viewing in Sabah, Malaysia to that of Kalimantan

Although we saw plenty of macaques, monkeys, a crocodile by accident, and millions of fireflies, the klotok journey is not intended to be a wildlife viewing trip. Its main mission is to support travelers with room, board, and transport to see the orangutans. 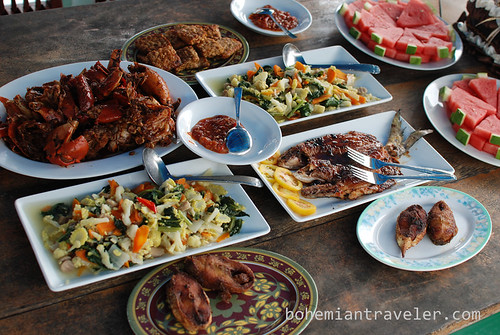 food prepared on the klotoks

In Malaysia, I went on a wildlife viewing boat trip up the Kinabatangan River, to see a whole host of Borneo’s animals. While that was excellent for seeing long-tailed macaques, civets, kingfishers, hornbills, and monitor lizards, it was not ideal for seeing orangutan in the wild. Our only orangutan spotting was from over a hundred meters away. 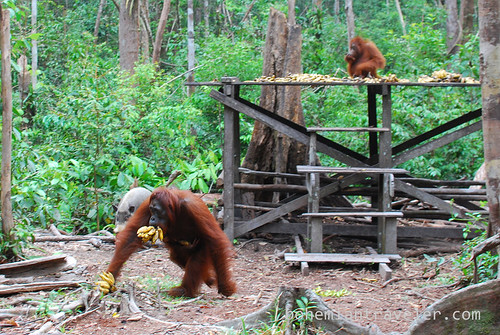 lunch time for the orangutan

Indonesia’s Kalimantan is the place to go to see the orangutan in the wild. The caretakers do two feedings per day. The orangutan that are either being rehabilitated or just show up out the forest for supplemental feeding can be seen chomping away at bananas and drinking milk.

But we also saw some orangutan while walking to the feeding area and from the river while we were on the boat. 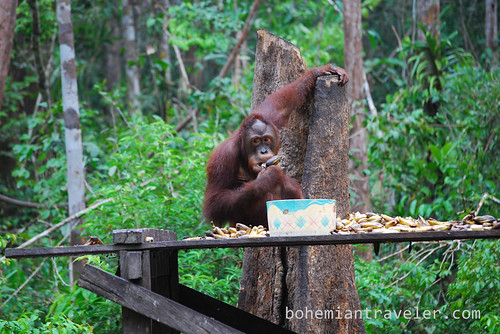 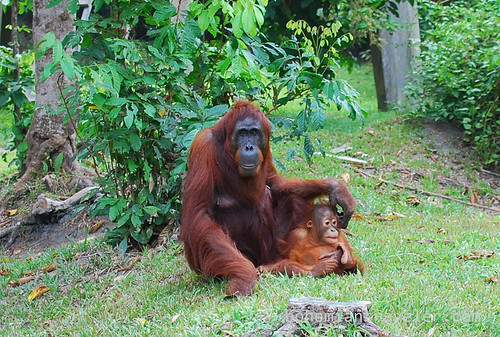 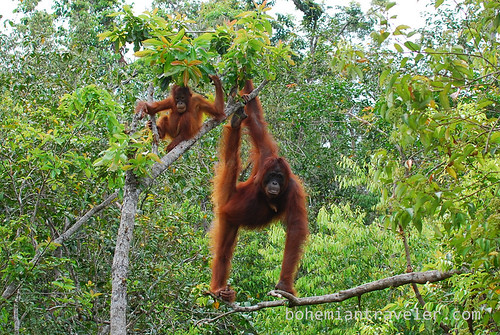 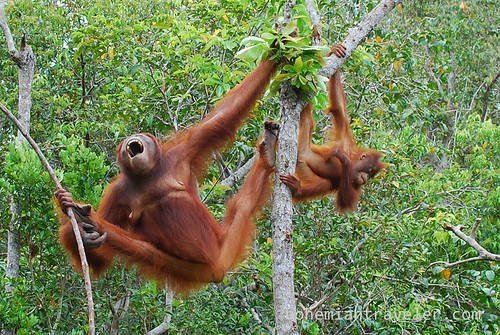 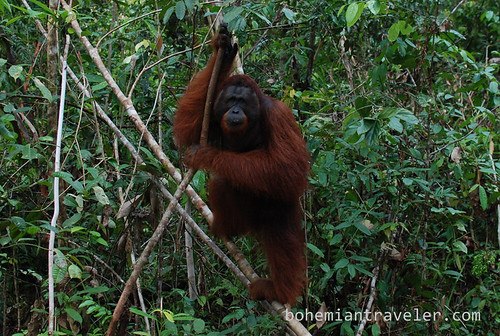 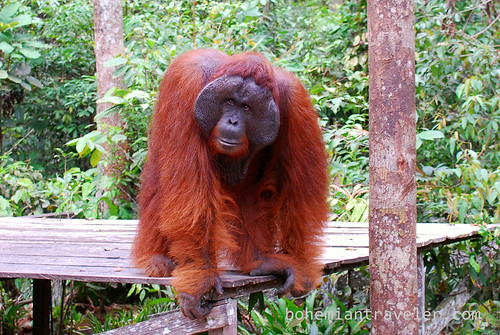 *Statistics from the visitors center of Camp Leakey

Visiting the orangutans of Tanjung Puting National Park was part of our trip to Indonesia with the International Bloggers hosted by the Ministry of Tourism and Creative Economy to promote tourism.