My chance to meet the Komodo Dragon Face-to-Face

I had great anticipation for my visit to Komodo Island. Earlier in the week, our expedition to see the orangutan of Kalimantan had exceeded expectations.

These lizards are enormous—the largest on earth—growing to three meters. They can weigh up to 90 kilos (200 lbs). They only live on four islands near Indonesia’s Flores. The dragons are protected in Komodo National Park. 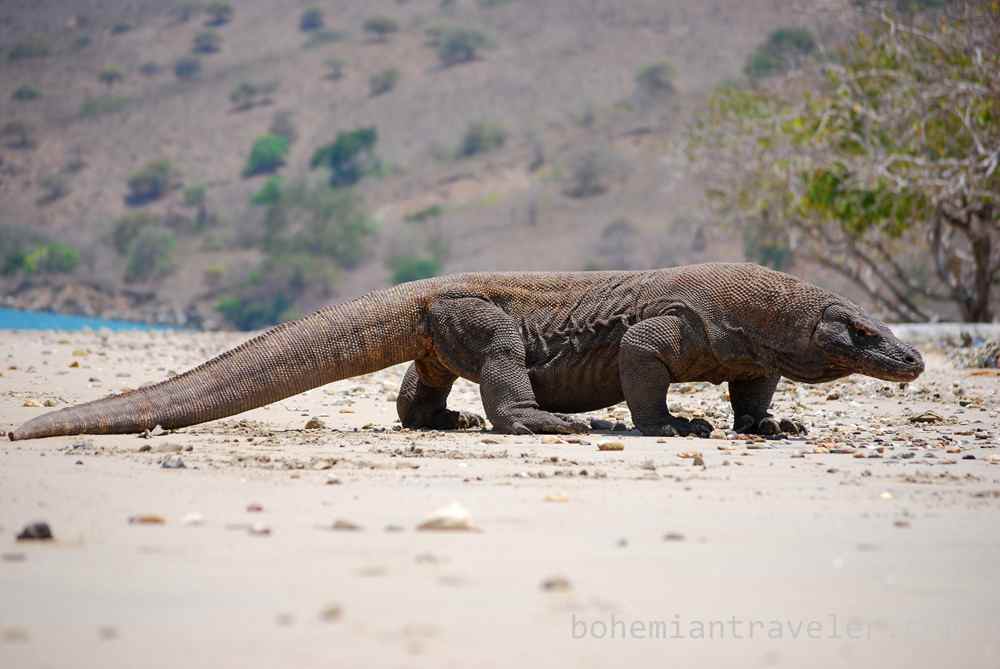 A Komodo Dragon in the wild in Indonesia.

Their exceptional traits are many: Their saliva is toxic. The female Komodo eats her young after they hatch. The male Komodo has two penises (actually, it’s one split into two). They also fight one another to the death for mating rites.  They have been known to attack and kill humans. They eat animals whole. They live on branches high in the trees for the first seven years until they’re no longer in danger of being eaten by their mother.

We had flown to Labuan Bajo, on Flores Island as part of the two-week international blogger trip around Indonesia. Here we based ourselves and set out on boats to visit the famed Komodo Dragons.

Day One with the Komodos of Rinca

I have to admit, after the first day I returned a little disappointed. We only saw three Komodos and due to the heat of the afternoon, they were just lying about under the houses of the national park staff—hardly ‘in the wild’.

The day’s visit took us to the island of Rinca, little more than an hour speed boat ride from the port at Labuan Bajo. Rinca is part of Komodo National Park where about 2200 Komodos live. Besides the lizards, the park has water buffalo, macaques, and spitting cobras. 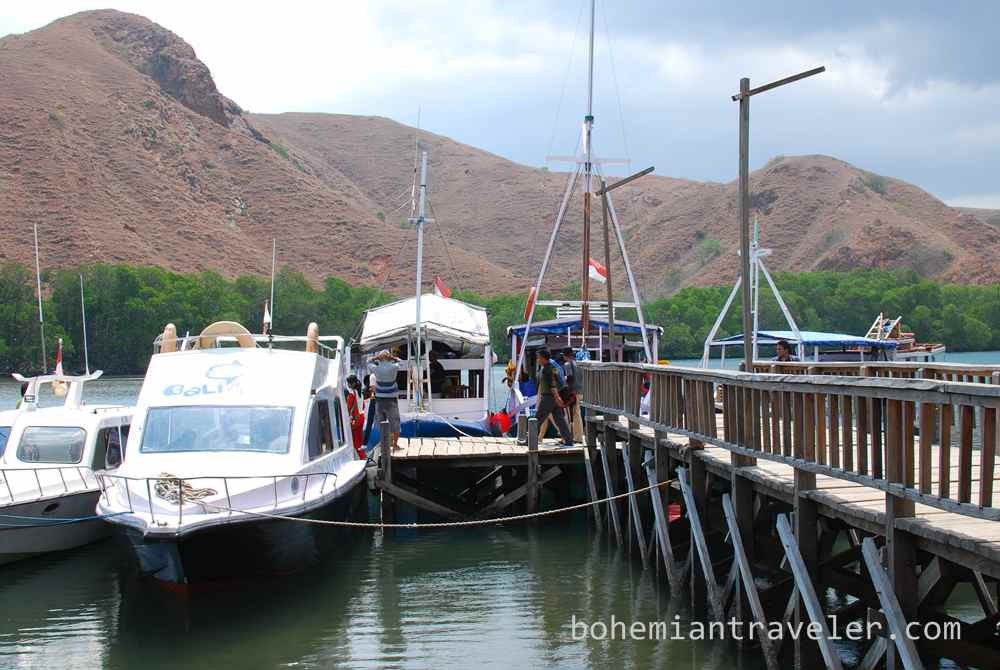 As the park staff guided us along the short loop trail, we learned that Komodo Dragons sometimes team up and hunt a water buffalo. They gorge themselves, eating the bones and all and can follow these feasts with two months of lounging about. You can see piles of their white feces colored so from their digestion of the bones. Sometimes they’ll settle for a small goat or a macaque for a snack.

The giant lizards have no natural predators. This is the reason they have evolved to become the biggest lizards in the world. It’s a process known as island gigantism. 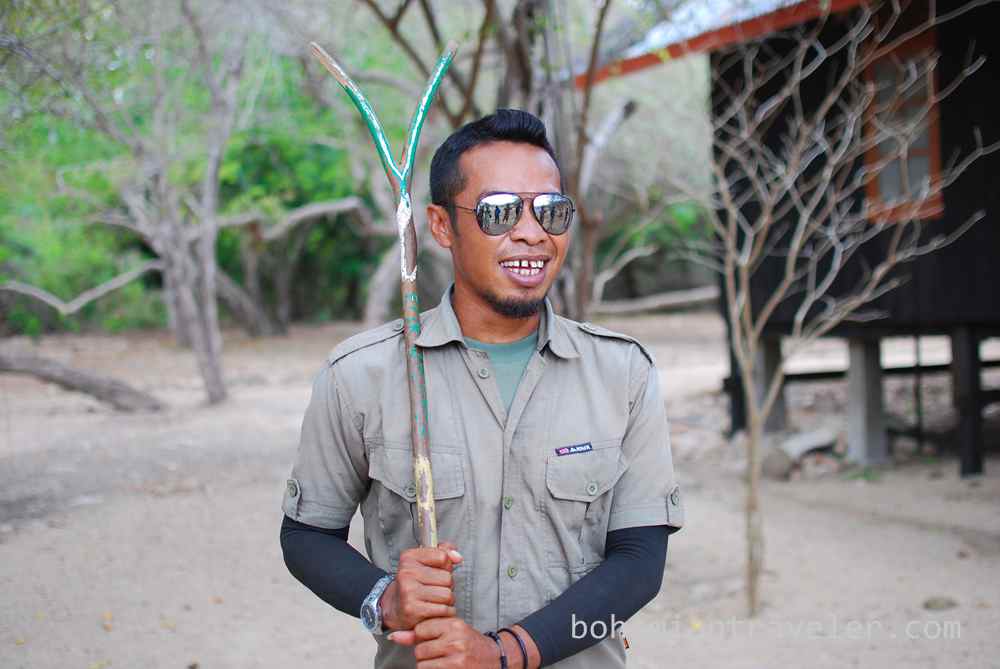 A guide on Rinca Island at Komodo National Park Indonesia.

Their only threat (besides humans) is themselves. Mothers will eat their babies after hatching. The fast babies scurry up trees as soon as they hatch, living in the branches for several years, only coming down for water. They’ll munch on geckos and small lizards until they grow big enough to fend for themselves on the earth.

We saw a nest of a female Komodo dragon. They use the abandoned nesting mounds of the Orange-footed Scrubfowl. They have some peculiar seasonal arrangement in which the birds move out just before the Komodos move in.

Day two with the Komodos

I would remain optimistic for the following day. We hopped into a speedboat and cruised over, this time to Komodo Island. Here there are about the same number of Komodos as on Rinca. Their total numbers in all are about 4600, the park’s director, Susedyo Iriyno informed us, when we chatted later that evening back in town.

We asked him about the future of the park and the fate of the Komodo. He seemed optimistic. We wondered about the impacts of tourism.

There are only two sites open for viewing the Komodo Dragons, but a third will open if tourism continues to grow.

“But won’t that impact the habitat of the Komodos?” we wondered.

“There are three conservation zones, so the majority are well-protected and do not have daily contact with tourists.” He continued. The Komodo is currently listed as a “Vulnerable” species, just above endangered status. This means if the animals and their habitat are not cared for, they are at risk for being upgraded to “endangered”. 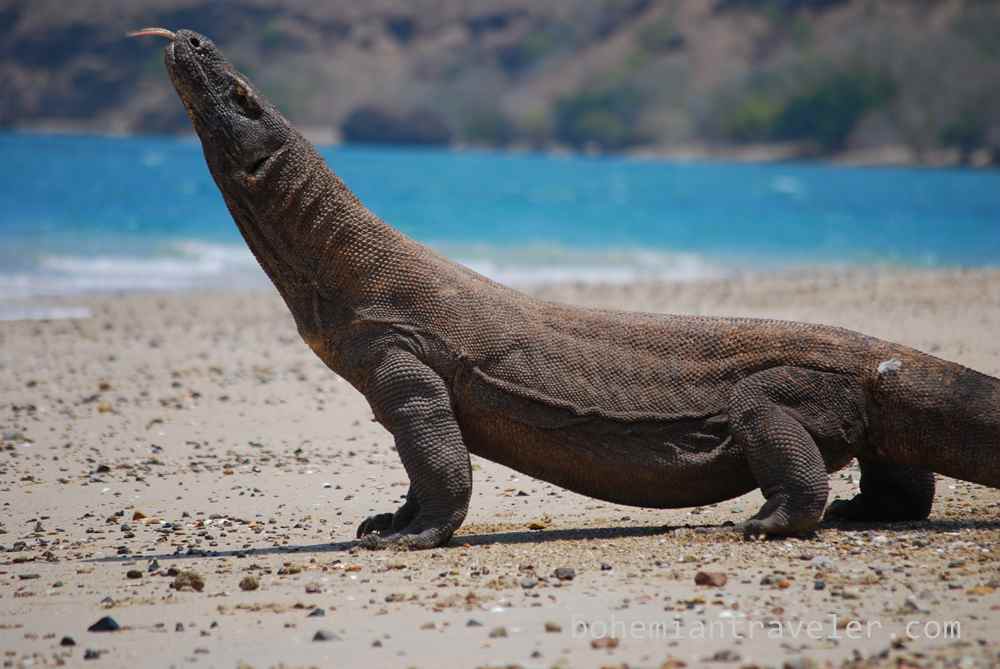 A Komodo Dragon on the beach on Komodo Island, Indonesia.

At Komodo Island we docked and stepped ashore. I was disappointed to learn we wouldn’t be trekking today (a downside of group travel). Hard to believe that we made such a great effort to reach this remote island national park and would just be hanging around the park buildings and photographing the dragons there.

The big park map displayed a number of short hikes through the areas where it may be possible to see one of the numerous Komodos—only with a ranger of course. These lizards are dangerous, and a bite from their bacterial saliva could be fatal. If one were able to hike, the rangers both lead and follow the visitors with a split-end shaft, which keeps the lizards from attacking. 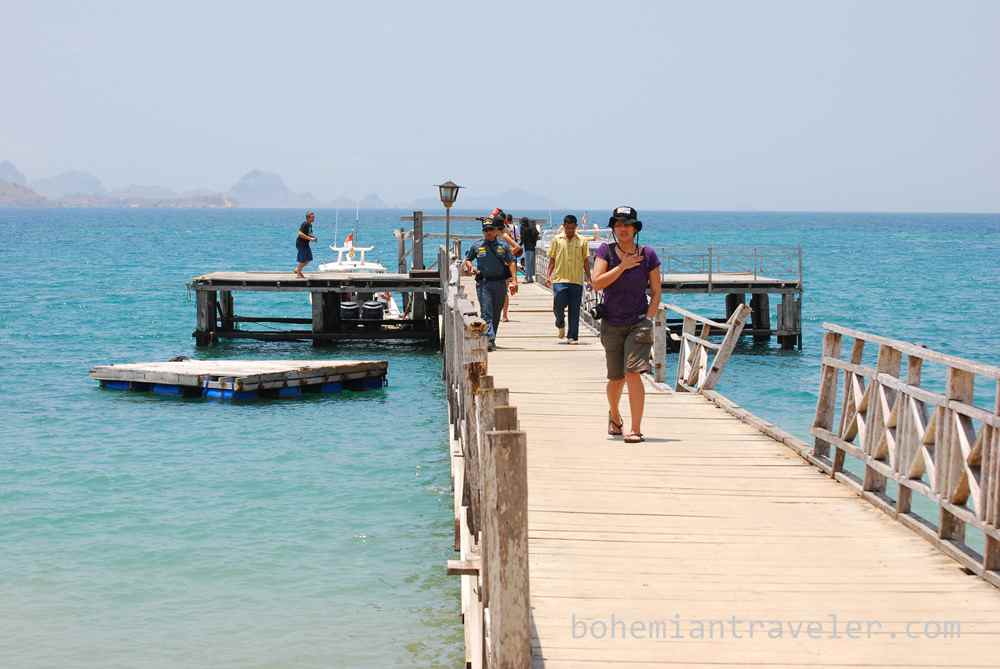 the dock at Komodo Island

Instead of hiking, we hung around the main area, close to shore, photographing three of the beasts. Unfortunately, it felt like a zoo until we caught sight of one down on the beach. We were lucky because they don’t normally venture there. But we took advantage of the incredible photo op.

I wish I could tell you how many Komodos you might see while trekking or more details about that option, but I cannot. I trust if you make the effort to get to Komodo, you’ll do the hikes. 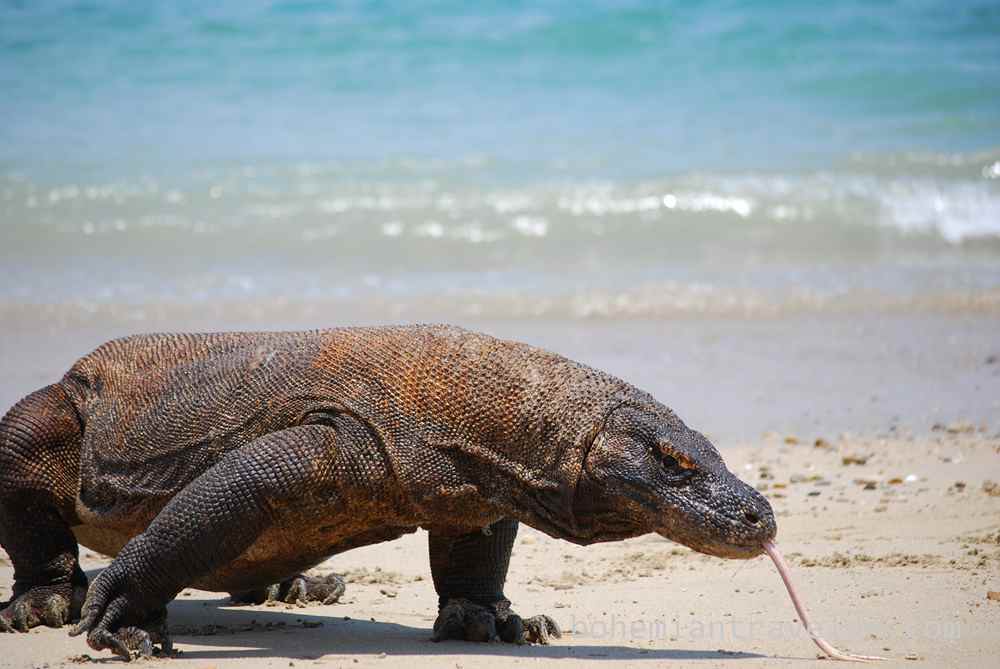 A Komodo Dragon walks across the beach.

Visiting the Komodo Dragons does take a lot of effort, but combining the chance to see such an exotic species in its native habitat along with the possibilities of world-class diving that surround Flores, I’d say it’s a no brainier—get to Komodo.

You can arrange boats and visits to Komodo National Park in Labuan Bajo, on the western end of the island of Flores in Indonesia. Visit http://indonesia.travel for more information.

This post was published in conjunction with the #travel2indonesia international blogger trip. Big thank you to the Ministry of Tourism for hosting this event. 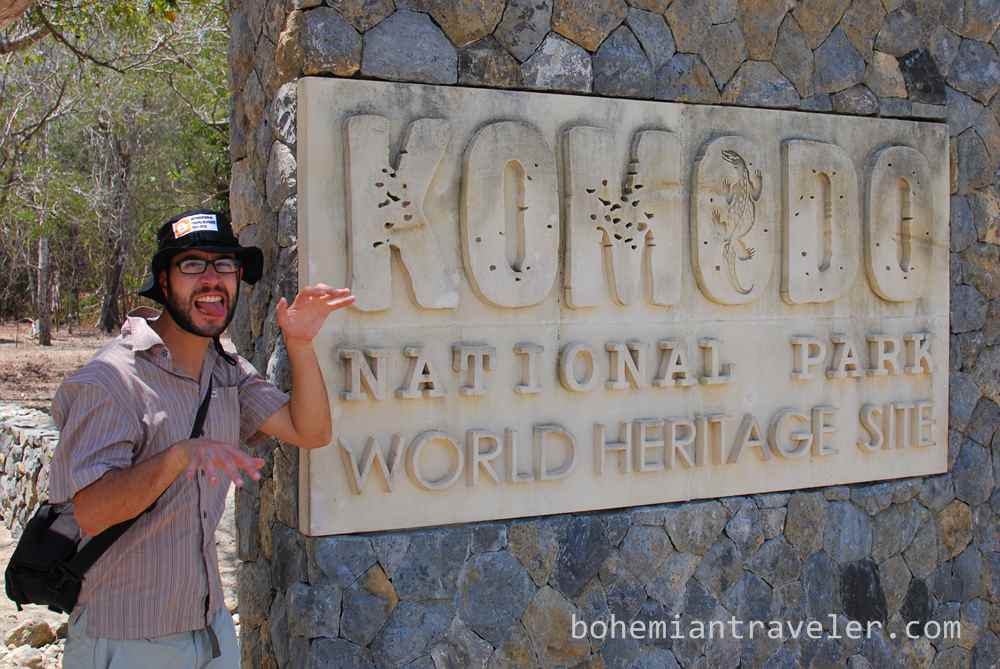 me at Komodo National Park