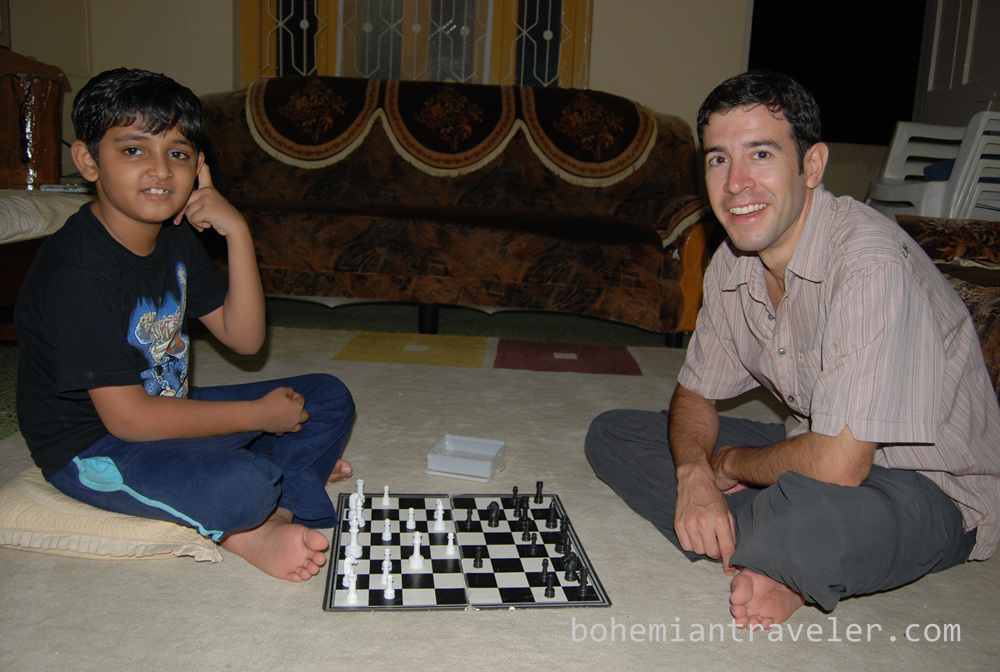 I’ve been reading an awful lot online lately about how couchsurfing isn’t what it used to be. As it’s gone mainstream, an unsavory bunch has joined to use the network for purposes other than it was originally intended (looking for dating and hookups rather than connecting travelers and hosts, sharing cultures, and international friendship).

Playing a game of chess with my couchsurfing host’s son.

The network has now got over six million members. I suppose whenever a community gets that large, you’re going to have some bad apples. I’ve gotten Facebook updates from friends I met on couchsurfing who report of “close calls” and having to leave hosts in the middle of the night. That is definitely not cool.

I’m fortunate to report that I’ve never had a negative experience, even after using couchsurfing off and on for the past five years. Although, lately, I’ve been starting to worry. But not about the safety issue.

I have been finding it very difficult to secure hosts recently. In Japan I was unsuccessful. (I was, however, very successful in receiving Japanese hospitality without couchsurfing.) My first couple attempts at requesting couches in India were also a failure.

Was I doing something wrong? Had couchsurfing really changed? Are male hosts only willing to host attractive-looking females? Are female hosts afraid to accept solo male travelers?

That’s when Manish responded to my couch request. “You are welcome…” His message simply said. A couple days later I showed up at his doorstep.

Manish lives with his family in Gujarat. Relatively new to couchsurfing, he was willing to extend hospitality to me. And for that, I was grateful.

My train to Junagadh from Ahmedabad arrived at the inconvenient hour of 4am, so I waited at the station with my head resting on my backpack until sunrise. Then I caught an auto rickshaw to Girnar Hill. Girnar is holy to Hindus and Jains and hundreds start the accent to its numerous temples every day at dawn. Getting over a three day bout of diarrhea, I was in no shape to tackle the mountain’s 10,000 steps. But I observed the pilgrims, many of them elderly, setting out from the base. By the time I reached my couchsurfing host a couple hours later, I was exhausted. Manish showed me to his spare room where I could rest and would sleep the following two nights.

The small city of Junagadh has a surprising number of sights considering how far off the tourist trail it is. Most of all, I enjoyed the reaction from locals who don’t often meet foreigners. Many are excited and most interested in simply chatting or asking where I’m from rather than trying to sell me something or ripping me off.

A homemade Gujarati thali cooked by Manish’s wife and mother.

Before and after sightseeing, I had a nice meal with Manish’s family. His wife and mother prepared an outstanding Gujarati thali. A few days earlier, on my way to Ahmedabad, I asked a man in my train compartment about the quintessential regional food to try. With a smile he said “Gujarati thali”.

When Manish’s 9-year-old son returned home from school, after he finished a school-related project with his grandfather, we played cricket. In the small front yard, we took turns between bowler and batter, and even though I had no idea what I was doing, it was fun.

After dark, we played chess. I had to play my best in order not to get my butt kicked by this kid. Trust me, he is seriously smart. After he beat me with the 4-move checkmate scheme during the first two games, I really had to up my game.

I talked travel with Manish and the challenges of finding all-vegetarian food for an Indian family while traveling outside of the country. I tried to suggest a few destinations with alternatives to meat-heavy diets. Touring the Uparkot Fort in Junagadh.

He told me of his previous couch surfurs—the Italian couple who made pizzas for everyone after they climbed Girnar and the English couple who had been traveling around India for months only using couchsurfing. Impressive.

Manish and his family were welcoming and accommodating and made me feel at home. After five months on the road, that felt good. It didn’t have to be my home, just any home with a comfortable place to sleep, considerate people, and delicious food.

And for that I was grateful.

I still don’t believe that couchsurfing is what it used to be, but I do believe that there are still people out there who are willing to show hospitality to strangers. They’re harder to find. But they’re there.

Huge thank you to Manish and his family!

For more on couchsurfing, read:

It’s Not about the Free Couch

Are you using couchsurfing.org? How long have you been a member? Has it changed since its conception? Have you had any negative experiences? Positive ones?