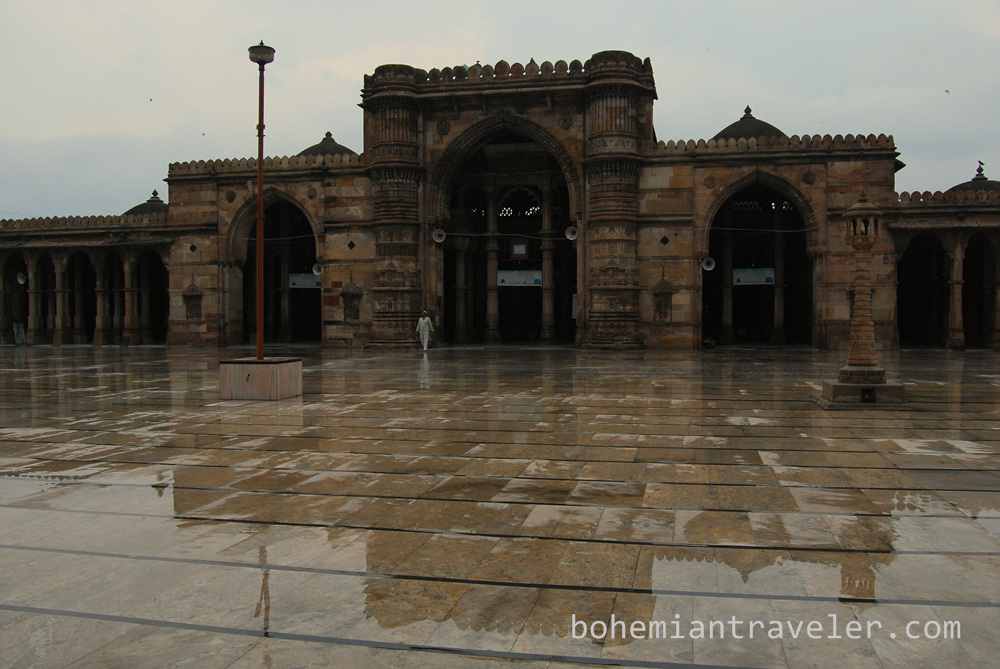 Ahmedabad, in the Indian state of Gujarat, is known as a living heritage city. What does that mean exactly?

I ask Nirav Panchal, my guide on Ahmedabad’s City Heritage Walking Tour. It’s just past 8 am and we’re walking through the winding back streets of the old district of Ahmedabad.

“These are very old homes and people are still living here. They live with a medieval mentality. They are very hygienic.” He tells me.

Worshiping at the Swaminarayan [Hindu] Temple in Ahmedabad India.

That is good news for me. I love old cities that are actually still lived in—ones with breathing communities. Ancient quarters that have been given over to tourism and commercialism are of lesser interest to me. Already I’m liking Ahmedabad, this largest city and industrial powerhouse of Gujarat.

But Nirav’s last sentence catches me completely off-guard. Hygienic is the last word in the English language that I’d use to describe this place. We are literally stepping over trash and food waste and dog and cow (and probably human) feces and there is lot of mud and dirt.

“Not like cleanliness hygiene,” he explains, “But ‘religious hygiene’. They are very careful about taking care of their spiritual duties.”

At this point we duck into a Jain Temple.

I’ve never heard the term ‘religious hygiene’ and I’m still examining the concept in my head.

“No photos inside the Jain Temple. They are more strict then the Hindus.” We started the tour at Swaminarayan [Hindu] Temple, where I snapped some good shots. I stow away my camera.

Jainism is one of the oldest religions in the world, breaking from Hinduism centuries ago. It has over 4 million adherents and centers around a philosophy of non-violence toward all living beings. 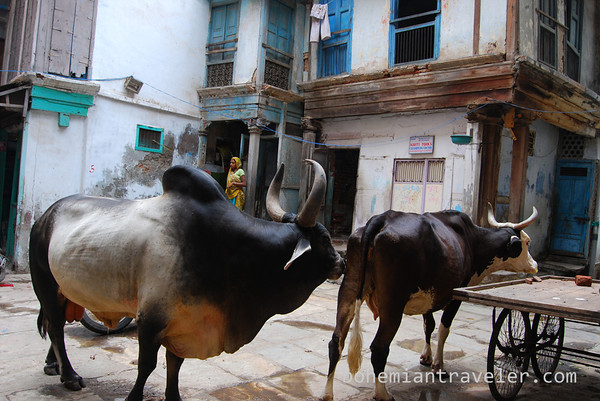 Cows in the street of historic Ahmedabad, India.

Nirav had wanted to take me inside other Jain Temples but he explains to me that because it had just rained, we were not allowed inside.

“The first 2 or 3 rains are considered impure. They are dirty. The atmosphere is being cleaned.”

This morning was exactly the second rain of the season. It is mid-June and the rainy season is right on schedule.

I don’t know much about Jainism, but Nirav tells me they have 24 prophets instead of Gods and that they are strict vegetarians and abstain from eating anything that grows underground, especially onions and garlic.

Before we leave the temple, he points out a rainwater catchment system. The same type is used all around the old city. For hundreds of years these have caught and held pure water.

“But not the first rains of the season.” Nirav reminds me again.

The basins are lined with lime which are resistant to bacteria, as are the copper pipes which stream the water from the roof.

We exit the temple down a flight of stars, through a wooden gate. Following the narrow road past goats and cows, we enter into what appears to be a cul-de-sac.

“If you entered here, what would you do?” Nirav starts pointing at doors that lead to homes and street-side toilets. “You’re trapped. It’s a dead end.”

I can tell he likes this part of the tour. He’s getting a bit giddy. I’m not sure what’s going to happen next.

Then he opens one of the doors.

“It’s a secret passageway!” We walk through the narrow, dark covered alley between buildings and reappear about 15 meters away on the other side. There are others like this in Ahmedabad.

Our last stop is the Jama Masjid (Friday Mosque). The huge, peaceful courtyard seems a world away from the bustling market street immediately outside the north entrance. The mosque is one of the most beautiful in all of India—incorporating a mix of Hindu, Muslim, and Jain architectural influences. It resembles a temple as much as it does a mosque.

Nirav points out a stone carving of the tree of life and reminds me that it is not an Islamic symbol.

“They had to utilize whatever decorative techniques the craftsmen and artisans knew at the time.” He adds.

Just as we exit the mosque’s prayer hall, with is dark interior of 260 columns supporting 15 principal domes, it starts to rain. I part with Nirav. As he leaves, children quickly file into the courtyard to take advantage of it poor drainage. The stone slabs fill with puddles and one by one the kids run and slide across the wet surface laughing.

Children playing in the rain in the courtyard of Jama Masjid.

The Heritage Walk of Ahmedabad is conducted by the Municipal Corporation on a daily basis beginning each morning at 8am. The group gathers on the first floor of the office outside Swaminarayan Temple.

The tour, through the otherwise disorienting narrow streets, is an excellent way to get a feel for old Ahmedabad and its 600 pols, or micro-neighborhoods of dilapidated, carved wooden houses and streets with common courtyards, wells, and chabutaras (bird-feeding towers). The tour costs 50 rupees ($.80).

A chabutara, or bird-feeding tower in old Ahmedabad, India.