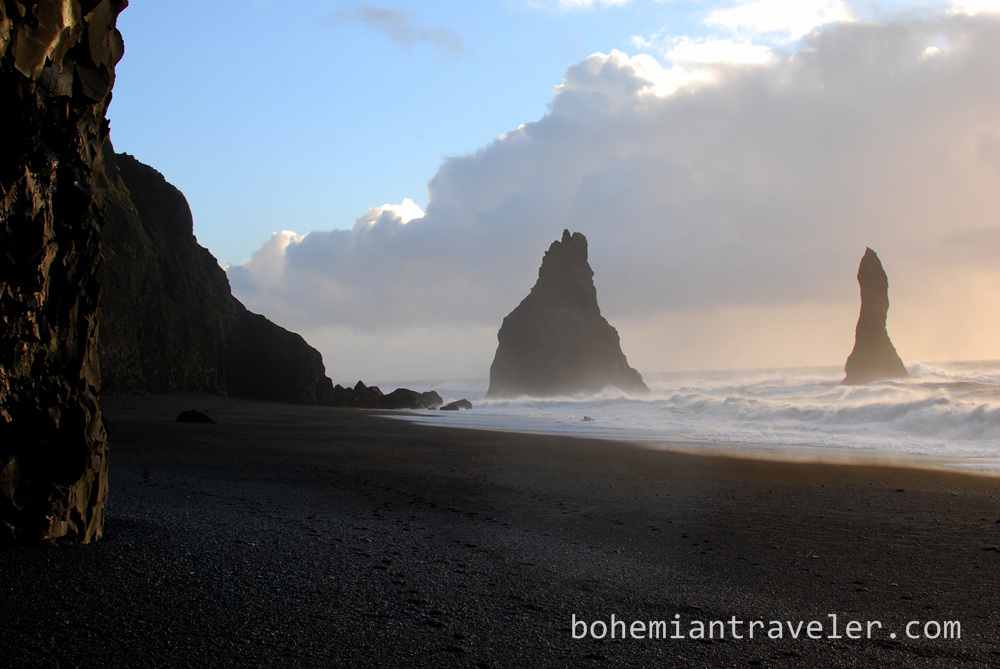 “We’re all related, but we’re not inbred.” Gunnar told us as he drove the van back towards Reykjavik after a full day of touring South Iceland.

It was one of the many quotes and anecdotes he told that day to entertain our small group and try to give us a picture of the Icelandic nation. 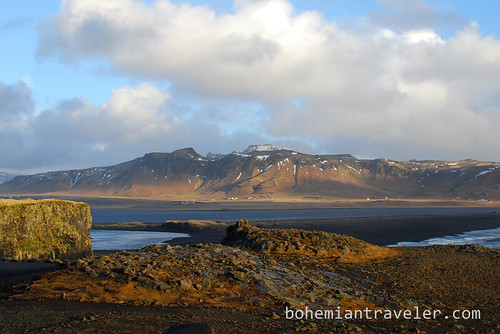 “In the wintertime, we put up a lot of holiday lights. It helps us get through the long, dark winter.” He continues as the snow begins to coat the ground in mid-November.

His company, Sterna Travel, offers tours around Iceland. I was invited to join the South Iceland tour. I had already explored the area with my family back in August, but agreed to take the tour because it mostly visited places I had missed the first time around. The day was filled with plenty of “how did I just drive past this last time” moments.

South Iceland in the off-season and saving money

When Gunnar picked us up in the morning from Reykjavik Backpackers hostel, it was still dark out. Even with the diminished hours of daylight, November is still a good time to visit. Even though it’s considered the off-season you have the added benefits of seeing the northern lights and witnessing this country and its landscape in different weather. Actually, it was clearer when I visited in November than in August when it rained nearly every day, hampering my day out with a pro photographer. 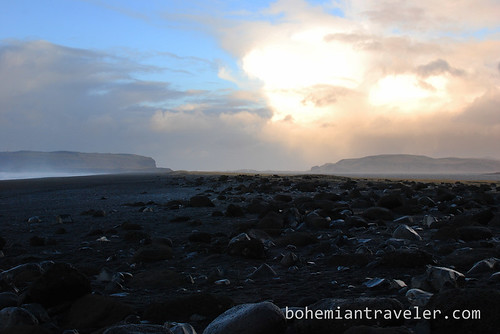 Visiting in the off-season is one way to save money in Iceland. Most of the hotels, which are a major expense, drop their rates outside of summer.

Taking tours is another way to save money. Sterna’s tour is normally 14000 Icelandic kroner, which is about $108 US. This might sound like a lot, (especially for someone like me who is normally living off of $15 a day in countries like Cambodia or Laos) but really it’s a good value for Iceland. To rent a car, fill it with petrol, and drive to all these sites, you might nearly spend that much (depending on how many you pack into a car). 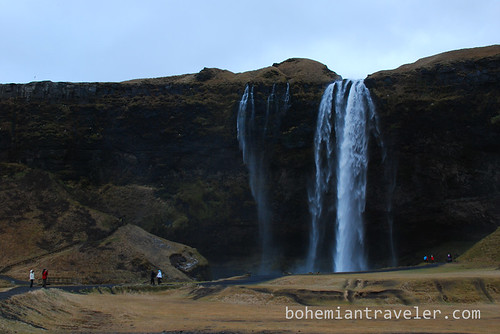 A view of Seljalandsfoss waterfall.

First stop was the Seljalandsfoss waterfall that you can walk behind in mild weather. When the wind is blowing you and your camera will get soaked as you attempt to walk behind the falls. The waterfall blasts off the cliff that runs along much of the coastline here in Southern Iceland. Actually it was once the coastline. The ocean has receded and now we can see the cliffs that remain. Runoff from the Eyjafjallajökull glacier supplies an endless stream of water plummeting over the fall. 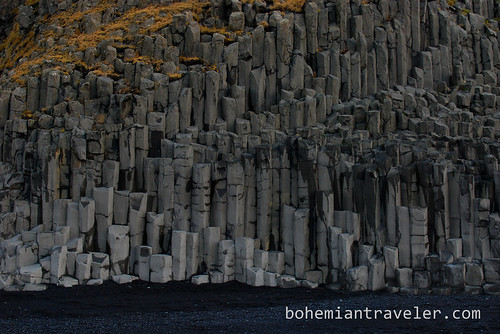 The black sand beach of Reynisfjara with its columnar basalt formations is a beautiful natural stop here on. The tall six-sided basalt rocks formed as volcanic material cooled. (It’s the same formation as the Giant’s Causeway in Ireland.) The beach is a black sand and there are formations off shore. We were warned of the dangerous currents here and I didn’t believe Gunnar’s death stories until I saw the waves and tide for myself.  When we visited, the wind was blowing too hard to stand up straight. 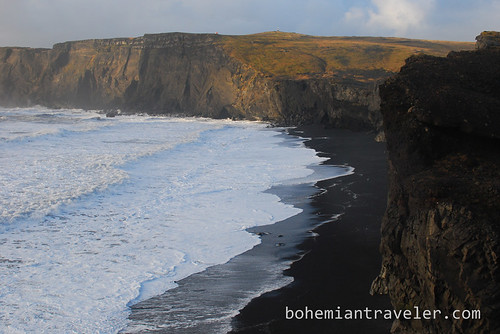 The Seaside cliffs at Cape Dyrholaey in South Iceland.

Very close to Reynisfjara is Cape Dyrhólaey, the southernmost tip of South Iceland. We parked on the cliff and looked out to the rough seas. Here the waves crash into another black sand beach below 100-meter high lava cliffs. There are supposedly a lot of puffins here if you come in July. In November, no puffins remained, but it was a magnificent view. But after 10 minutes I was frozen and we piled back in the van and drove to Skóga. 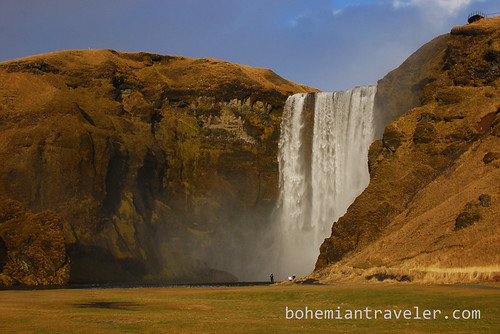 After a nice bowl of unlimited bread, butter and mushroom soup, we walked over to the Skógafoss waterfall. This is Iceland and in November the sun isn’t too far above the southern horizon even at midday. Luckily for us it was cloudless when we made our approach to Skógafoss. The rays of sunlight blasted through the waterfall’s mist and produced a beautiful rainbow. The rainbow was only outmatched by the remarkable waterfall. 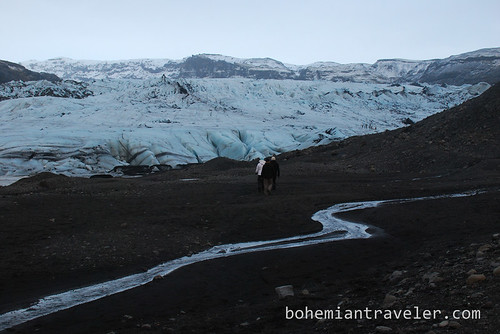 Walking to the glacier.

This is a great opportunity to walk up to a glacier and touch the ice. It’s also a shocking visual as to how fast our planet is heating up. Gunner will show you where the glacier used to be and you can walk across all the area that was once covered. Gunnar, the amateur comedian that he is, even gave us all a chuck of ice to hold, so that we could say we held a glacier. On a more serious note, the blue hue of the ice was particularly deep at dusk when we visited. Another in-your-face reminder how amazing the landscape of Iceland is. 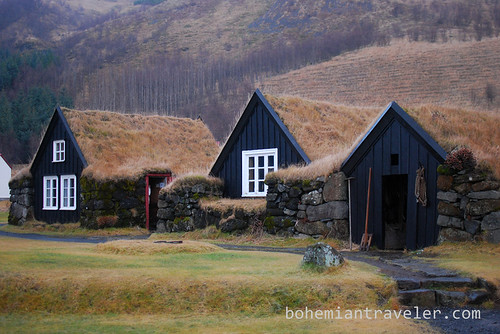 We returned back to the folk museum at Skógar before it closed for the day. Folk museums are kind of thing in Iceland, so you should make an attempt to visit at least one during your time there. This museum is basically a collection of antiques and other artifacts of settlement in Iceland. The turf-covered houses are worth checking out for sure.

After it became dark we stopped by the visitor’s center of the 2010 volcanic eruptions: “Eyjafjallajökull Erupts Visitor´s Center” at Thorvaldseyri. We saw the 20-minute film made by the people that live right under the volcano, in which we learned more about the eruption, its effects, and the aftermath of the eruption. 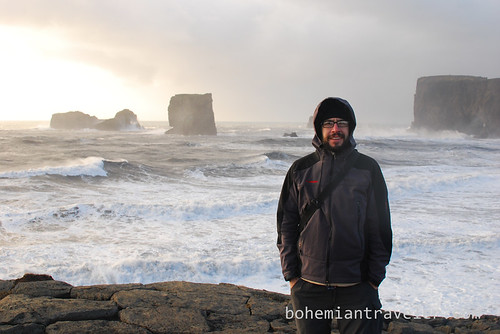 Me at Cape Dyrhólaey in South Iceland.

After that, we all drifted in and out of sleep driving home in the dark while Gunnar amused us with more fantastic tales about life in Iceland. Sterna is not only a reputable company to visit Iceland with, but also one that treats its customers as individuals, not just numbers on a tour.

For more information about Stera, check out their website: http://www.sternatravel.com/