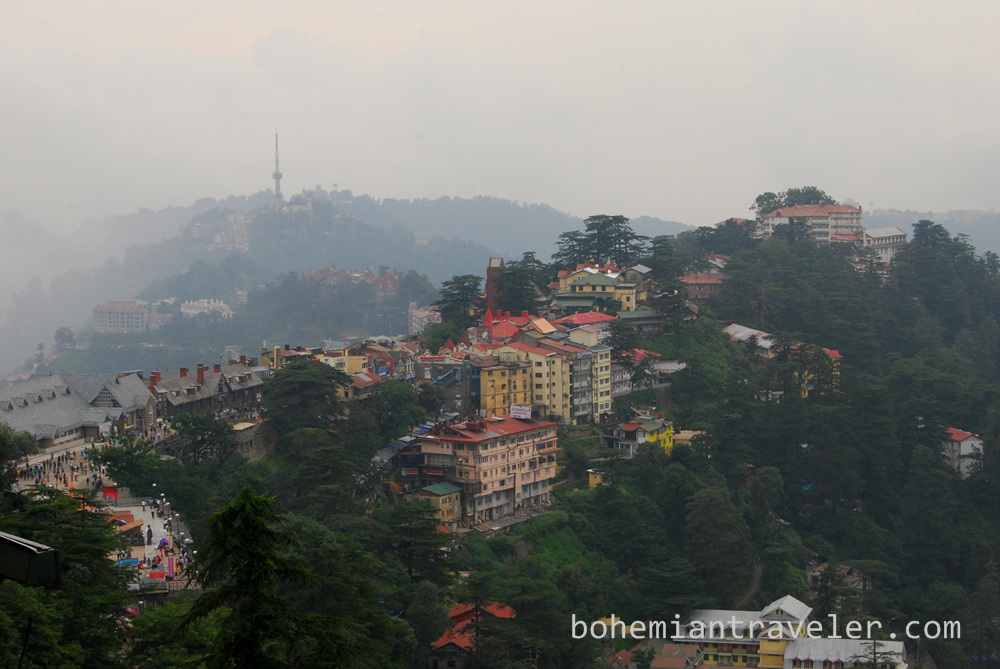 We’ve scored ourselves a cheap guesthouse on the side of the ridge. It’s an awkward period in July between two high seasons. It’s the monsoon, but full blown rain hasn’t hit yet. The weather is mostly heavy fog and light sprinkles. But when the fog opens, the view is phenomenal.

We’re in Shimla. The town is India’s biggest hill station. The British Raj made this their summer capital. When the heat came to Calcutta in the old days, the British moved here. It’s cool. Shimla sits at about 2205 meters (7234 ft.), strung out over a 12-kilometer ridge. One side of the ridge drains to the Arabian Sea, the other to the Bay of Bengal.

The views from Shimla are quite nice in any direction. If you get a guesthouse on the side of one of the ridges (which many are), you can kick your heels up on the balcony and see how the buildings cling to the hillside stretching in both directions. You’ll also spot plenty of bird life and the monkeys that live alongside residents here. View over the Hill Station of Shimla in India.

I came to Shimla to cool off and to see what exactly a hill station is like. I had visited the Cameron Highlands in Malaysia, which is also a former British Hill Station. Now, I wanted to see one in India.

Most hill stations are smaller than Shimla and foreigners prefer the more quaint ones. They are always located up in the mountains, but not all are in the Himalayans. There are hill stations around the entire country of India. I’m hoping to explore Darjeeling, Mussoorie, and Nainital, later this summer.

Overall Shimla isn’t very exciting, but there is enough to do to keep one from going bored. A couple days here offers some relief from the bustle and filth that plagues most of India. Traveling in India can make any traveler exhausted physically and emotionally.

Scenery from the Toy Train.

Why go to Shimla

Shimla does allow the traveler to see what Indians do on holiday. Most visitors in Shimla are domestic tourists who spend their afternoons strolling up and down the Mall, which is the road lined with shops and old stone buildings from the British era. Most importantly, the Mall is closed to traffic. The former Viceregal Lodge of Shimla.

You won’t find touts and general harassment that travelers experience in other cities in India. I’m not sure why. Maybe because Shimla is a resort used primarily by Indians or perhaps just because it’s a more well-off town. When it’s scorching on the plains, wealthy Indians come here. There are also numerous private schools located in Shimla.

Normally, I avoid resorts and tourist towns, but Shimla has a historic element. There are a few old buildings, most notably the former Viceregal Lodge. Built from 1884-88, the gorgeous stone building was crafted in the Jacobethan style. The former residence of British Viceroy of India, it is surrounded by well-kept gardens and is perched on the edge of the Observatory Hills about 3 kilometers from center Shimla. Spend any amount of time here, and you will forget what continent you are on.

The Ridge (along the Mall) in Shimla, Himachal Pradesh, India

Part of the point of visiting Shimla is a ride on the toy train. Built in 1903 by the British, the journey crosses 864 bridges and passes through 102 tunnels. A ride on the historic Kalka-Shimla narrow gauge railway is a highlight of India. The slow and shaky World Heritage train bends its way around 919 curves. The route climbs from 656 meters (2,152 ft) up to Shimla at an elevation of 2,076 meters (6,811 ft) where the line terminates.

Shimla is fairly accessible from Delhi and is on the way if you’re heading up to Manali, further up in Himachel Pradesh. The railway connects Delhi with Kalka in about 4-5 hours. From there, you’ll need to take a bus, or preferably the toy train which winds its way up to Shimla in about 5-6 hours. There are hotels for all budgets in Shimla.

John riding the Toy Train up to Shimla.