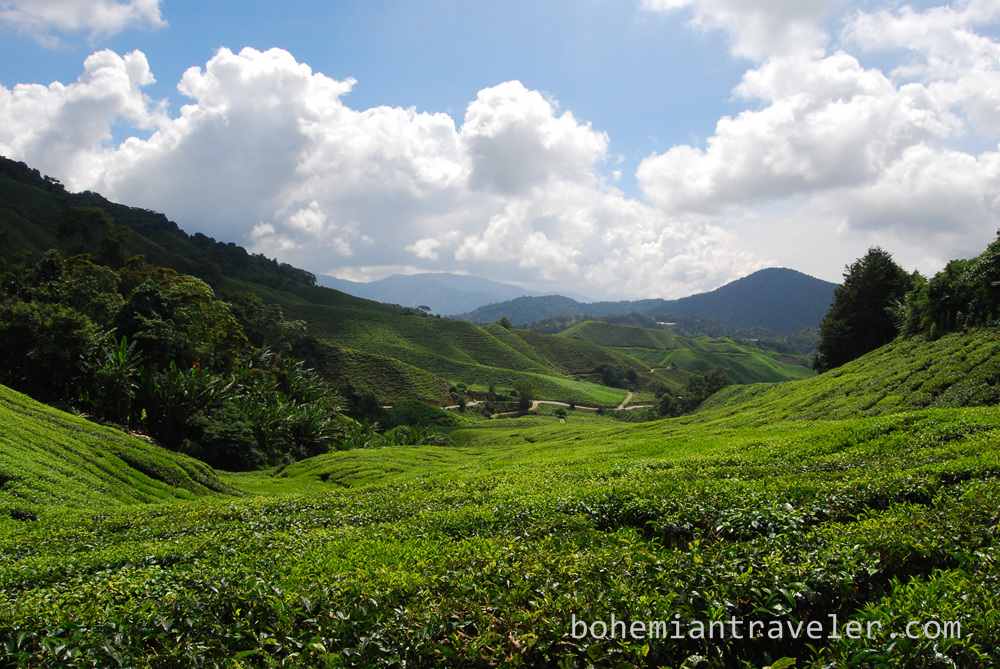 I visited the Cameron Highlands for one simple reason: tea. The region, discovered in 1885 by an English-led mapping unit, is one of Malaysia’s favorite getaways. Others go for the refreshing climate, which averages out to a cool 18 °C (64 °F) and some for the wealth of hiking trails in the region.

My four days in the Cameron Highlands revolved around visiting the two tea plantations and sipping a cup at the source. At Cameron Valley [Bharat Group], four kilometers south of Tanah Rata, you can wander through the rows of neatly planted tea, so long as you don’t pick the leaves. Malaysian couples and families make their way on the four-hour trip from Kuala Lumpur to enjoy the cool temps and enjoy a cup of tea overlooking a vast view of the plantation. There is also plenty of packaged tea available for purchase.

I also ventured by public bus north of Tanah Rata to the Sungai Palace Tea Estate. This is owned by Boh Tea—the largest and most well-known producer in Malaysia. From the main road, where the bus left us off, we walked the 40 minutes in by foot. The winding road yielded good views of the plantation.

Although the Cameron Highlands were explored in the late 19th century, tea wasn’t planted until the 1930’s. Today, Boh Tea [at Sungai Palace] offer tours of their factory. Not too much has changed since then. You’ll see some of the original equipment from the early 20th century still plugging away. The tour outlines the four major steps to producing black tea: withering, rolling, fermentation, and drying.

After the tour you can order tea and sit at the tables overlooking the tea fields, seeing the beginning of the long process that leads to your brilliant cup of tea.