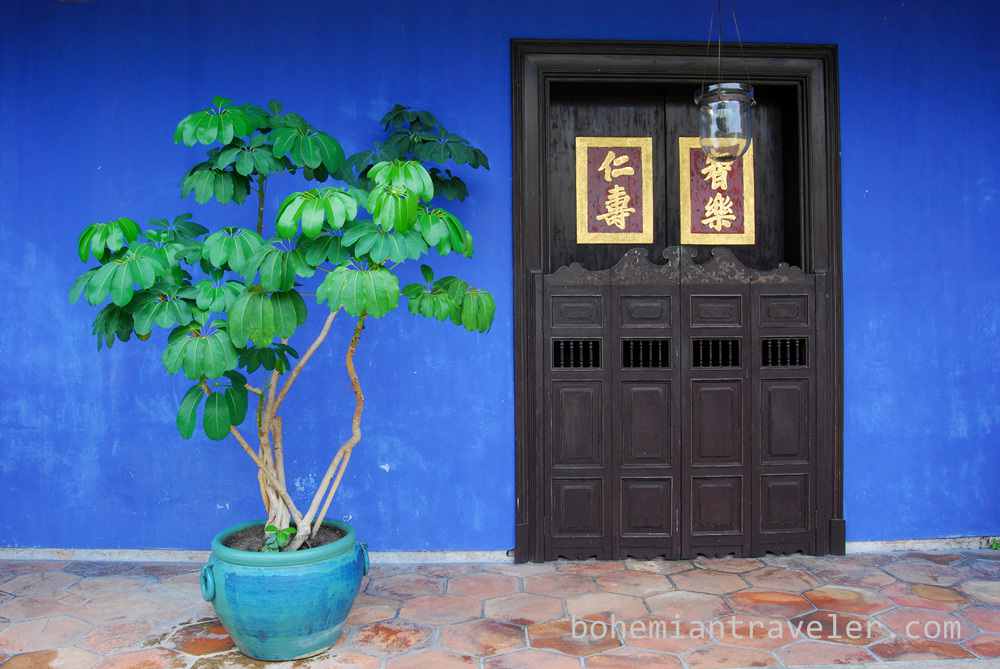 Many of these 14 things to do in Penang involve eating. Eating is a primary attraction in Penang. If fact, I would throw Penang up there with Singapore and Hong Kong as tops for eats in Southeast Asia. My three days there were planned around my meals.

There’s more to Penang than just food—its historic city of George Town is a UNESCO world Heritage city. Its cultural melee of centuries of immigrant settlers has given the city a unique ethnic makeup. This gives the visitor to Penang a peek at Chinese, Indian, Peranakan, and Malay religions, customs, and cuisine. The British colonial legacy is also apparent in the architecture.

Here are 14 things to do in Penang Malaysia to give you a great appreciation and introduction to the city:

Find one of the street carts in Little India which fry up a variety of Indian treats. Beside the delicious veggie samosas you’ll find vadai, kesari, green beans, and halwa. These will keep you energized for your walk around George Town. Penang is best explored by foot. Follow a walking tour from the colonial civic buildings near Fort Cornwallis past the Peranakan Mansion, through Little India, to the temples and mosques beyond that.

This is the true Penang experience—and where you’ll find the best food. There are hawker stalls set up around the old city. Some are right out on the street and others are just outside permanent cafes. Some classic dishes to look for are curry mee, char kway teow, wan tan mee, Penang laksa, and cendol.

Stay in the old Town

Penang is popular for Backpackers in its own right, but also for those coming from Thailand to renew their Thai visas. Guesthouses and hostels have sprung up in recent years. I stayed at Ryokan Chic Hostel which describes itself as the accommodation for flashpackers. It has a fantastic location on Muntri Street from which to explore George Town and is quite comfortable as well. If you’re looking for hotels in Penang, they are usually located on the edge of the old town. To save yourself the hassle of running from hotel to hotel, do an online search a couple weeks in advance.

Hands down my favorite dish in Penang, char kway teow is best at one of the many hawker stalls around the city. Char kway teow is flat rice noodles fried in a wok over high heat with minced garlic, prawns, soy sauce, bean sprouts, chives, and lastly cockles. Delicious. 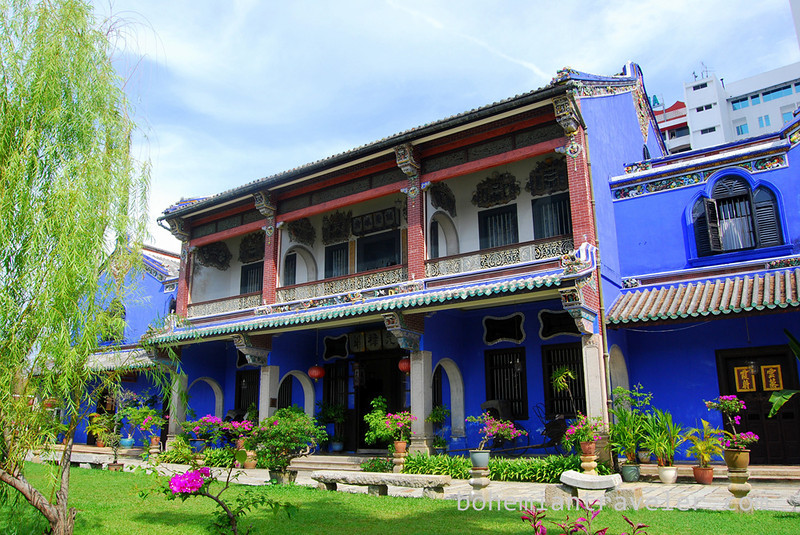 Popularly known as the “Blue Mansion”, Cheong Fatt Tze built this multi-room house which won a UNESCO award for its fine restoration. Cheong Fatt Tze, originally from China, was a self-made man. His business was initially based on agricultural products such as rubber, coffee and tea, but he branched out to the financial sector by acquiring a bank, a move which led him to be dubbed “the Rockefeller of the East”. 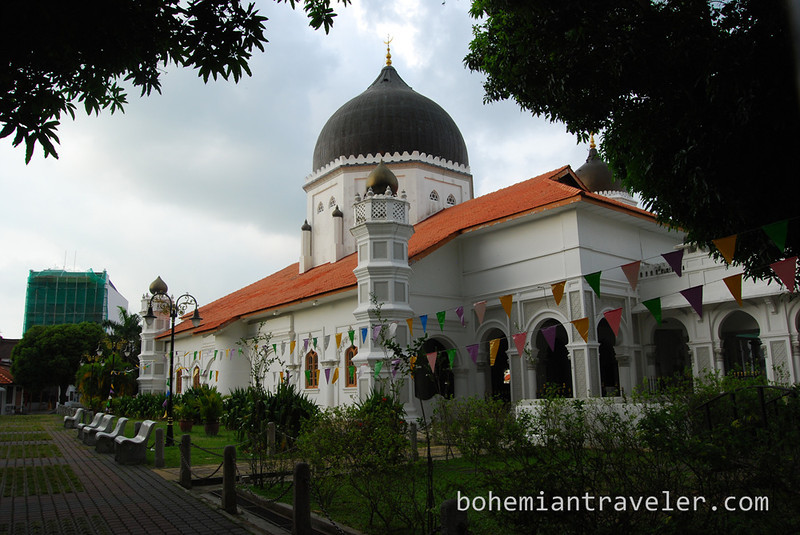 Kapitan Keling Mosque was built in 1801 by Indian Muslim traders. It is the largest historic mosque in Goerge Town and incorporates Islamic, Mughal, and Moorish architecture. Take your shoes off, wash your hands, and go inside. 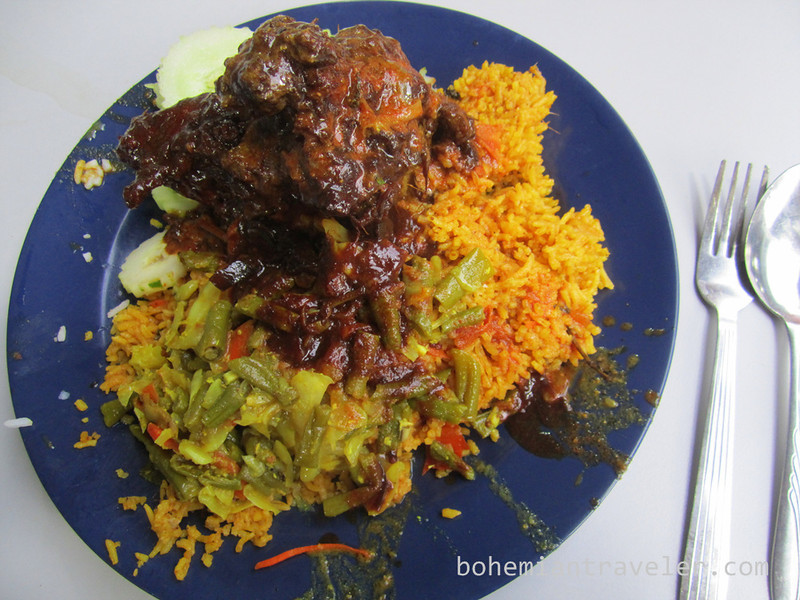 Nasi Kandar originates from Penang and is an Indian-Muslim dish. It is basically rice served with a variety of curries. You can usually choose from chicken, fish, prawn, squid, beef, and occasionally crab. Nasi Kandar is halal. One of the best places to try it is called Clear Line Nasi Kandar.

These are two of Penang’s most handsome colonial buildings. City Hall is, as it sounds, is a municipal building, but Town Hall is actually a social one, which plays host to a variety of high society events.

Located near Fort Cornwallis, the Clock Tower was built in 1897 to commemorate the 60th year of Queen Victoria’s reign. The tower is 60 feet tall, each foot representing a year of the Queen’s reign. Regrettably, she never visited Penang, nor did she ever live long enough to see her clock tower completed in 1902.

Cendol is a refreshing icy desert that is popular all over Malaysia, but the variant from Penang is especially adored. Cendol is made with shaved ice, green-grass jelly, palm sugar syrup, red beans, and is buried in coconut milk. Find one of the most famous from the street cart outside Joo Hooi Café. 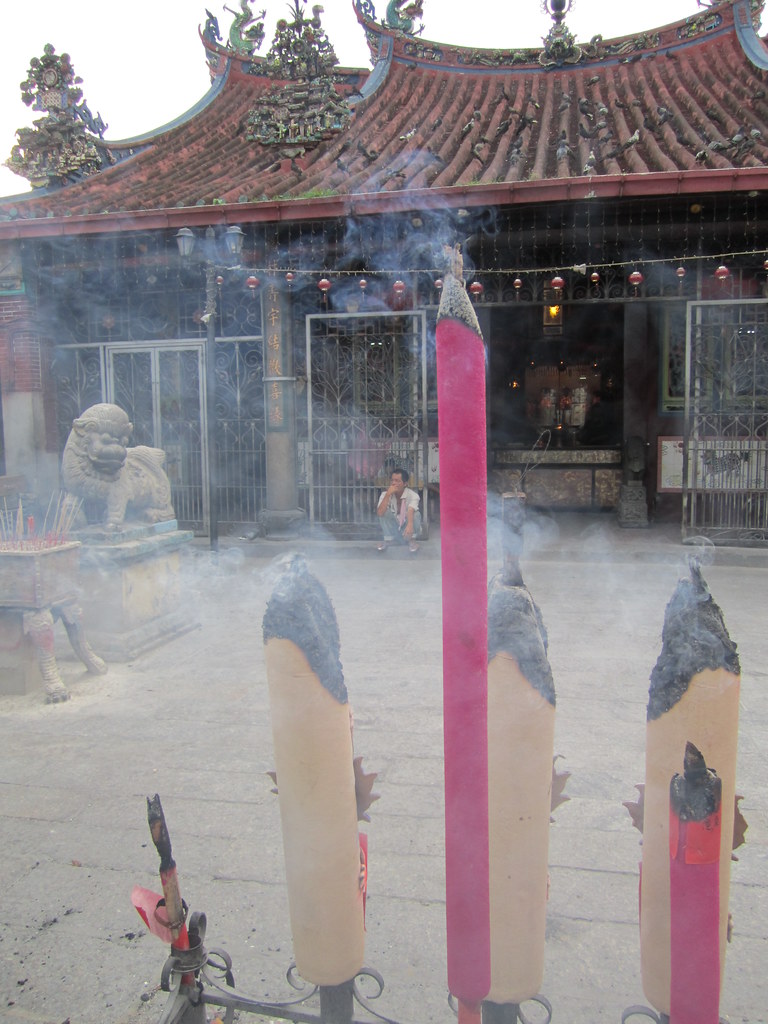 Chinese historically make up a large portion of George Town’s population. Chinese settlers in the 1800’s built the Goddess of Mercy Temple, or Kuan Yin, the earliest of the temples ever built in Georgetown, Penang. There are nearly always huge incense sticks burning outside and worshipers paying their respects inside.

The Peranakans, also known as the Babas and Nyonyas, or Straits Chinese, are a group of intermarried Malay and Chinese found in Penang, Melaka, and Singapore. This mansion is an excellent example of a typical home of a wealthy Baba from over a century ago. Over a thousand antiques are displayed inside.

One of the lesser-known and newer attractions of Penang are the street art installations scattered throughout the city. The most popular are the boy and girl on a bicycle, the boy on a motorcycle, and the boy reaching up. Look for them in the blocks south of Little India.