crossing the border from Poland to the Czech Republic

One of the novelties of traveling in Europe is the density of small countries and the ability to pass through most of them with absolutely no border controls. The small size of the countries also makes it not uncommon to allow the traveler to pass through more than one of these countries in the same day. This happened to me the other day leaving Poland.

Poland is surprisingly untouristy. Besides Krakow, I saw very few travelers and tourists. Even an outstanding city like Wroclaw had only a few domestic tourists and some from neighboring Germany. I hardly ever get recommended a place to eat or drink on a city’s main square—they’re usually over-priced and less-than-satisfactory. Not in Wroclaw. 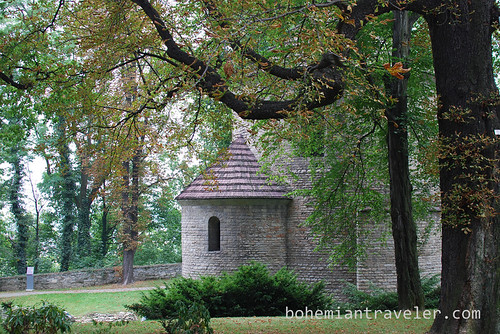 up on castle hill in Cieszyn, Poland.

Near the end of our week in Poland, I was disappointed to leave. I was just getting the hang of some useful phrases and vocabulary in Polish to make my travels go more smoothly. Although completely different, Russian shares many roots with Polish, and with my basic knowledge of Russian, it was fun picking up little pieces of this other Slavic language.

I felt good about my experiences in Poland. A short, but productive stay in Warsaw, excellent city tours in Wroclaw and Krakow, and more than an introduction to Polish cuisine. I was targeting the “milk bars” or very similar type eateries. These places serve home-cooked Polish favorites for reasonable prices.

Most memorable was visiting a friend in a small city in southern Poland. It’s always nice to visit friends in foreign countries and this was no different. You get an opportunity to see how people live in that particular place and learn and experience so much more than an average tourist. On Saturday night, we went to a house party, met lots of people, and ate a variety of grilled sausages in between shots of vodka.

The next day we woke late and drove over to an old coal mine that recently opened for tours. It’s just outside of Katowice and visitors can tour to the levels 170-meters underground as well as 320 meters. This region located in southwestern Poland is called Silesia. It’s an industrial area rich in minerals and natural resources. Many of the towns here were once strictly coal-mining, and some still remain that way. 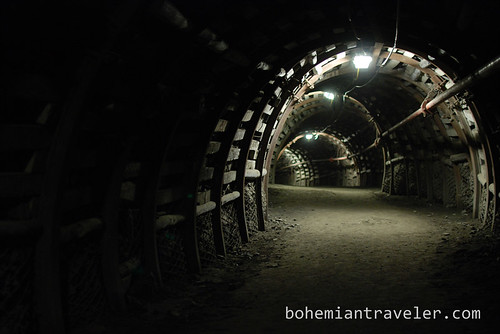 underground in Guido Coal Mine near Katowice, Poland.

From Katowice we took a bus over to Cieszyn. Cieszyn was another surprise—a nice historic little city with a beautiful main square and other historic buildings—and absolutely no tourists. Another distinctive feature of Cieszyn is that it is split into two parts—Czech Cieszyn, or Český Těšín, lies across the Olza River in the Czech Republic. After a last plate of pierogi and look around the city, that is where we went. 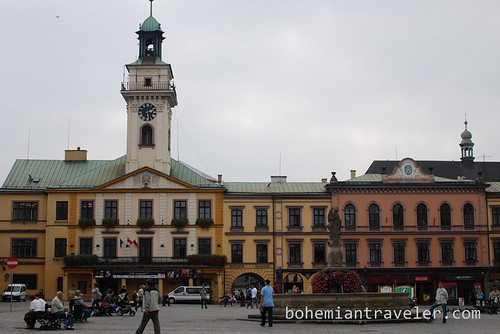 The Rynek in Cieszyn Poland

There are no border controls on either side of the bridge anymore, just a couple money exchangers and a man playing the accordion for change, right smack in the middle of the bridge. That’s where the line is drawn and above that spot on each side of the road there are signs welcoming you into each respective country. We tossed our remaining zloty into the musician’s opened case, snapped some photos by the signs and continued down to the Český Těšín train station to catch our train into Slovakia, which would be our third country that day.