Photos from the Road: View from the train in Poland 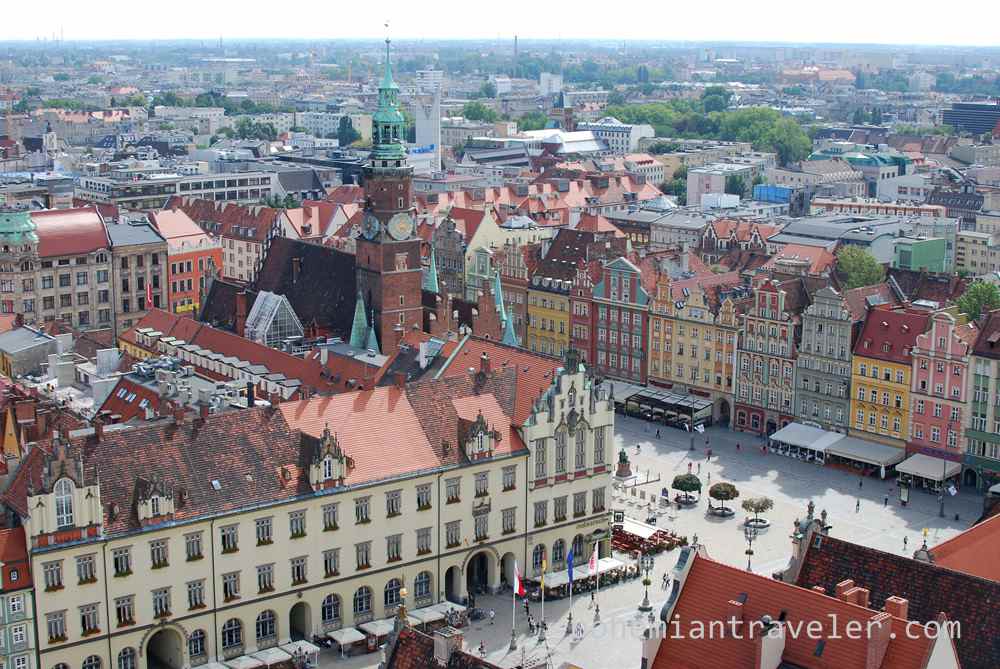 We were recommended to stop in Wroclaw Poland by several people. These recommendations were based on the notion that we’d enjoy a pleasant city with nice architecture and an interesting history with a near-absence of tourists. The recommendations were right on. Pretty soon, people other than Poles and a few Germans will be visiting Wroclaw in great numbers. Oh yeah, and they’ll be a European City of Culture in 2016. So get here now.

Wroclaw is yet another Polish city (like Warsaw) that was greatly affected by World War II. Not only because it suffered so much destruction from the Soviet siege, but because it became part of Poland once the borders shifted after the war. Wroclaw used to be known by its German name, Breslau. But it was also once under control of the Bohemian (Czech) Dukes when it was founded in the 9th century. 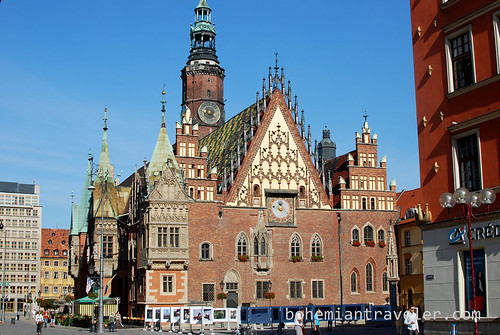 The defining feature of Wroclaw is its main market square. But the city had its origins on Cathedral Island. The center eventually moved to its present location and Cathedral Island functioned as a sort of “little Vatican” under autonomous rule by the local bishops.

The city’s market place square is known as the Rynek. The focal point of the Rynek is the Gothic town hall. Miraculously, it remained mostly intact after the war. It dates from the 14th century and a Renaissance façade decorates the south side.

Wroclaw was once a very rich city—it had a clock before Prague or Krakow. Its wealth grew due to a few policies. One, called the rule of warehouse stated that anyone who passed through Wroclaw had to stay for three days. This generated income for the inns and eateries. Another rule stated that a vendor or trader had to sell goods if there was a willing buyer. It didn’t matter if the freight was destined for another city—it would be dropped in Wroclaw and the trader would have to change plans.

While visiting the Rynek, you’ll also want to look out for the black area on the square in front of the town hall. This is the spot where a cage of sorts used to stand. Crazy people or drunkards were kept here to be view and humiliated by the townsfolk. 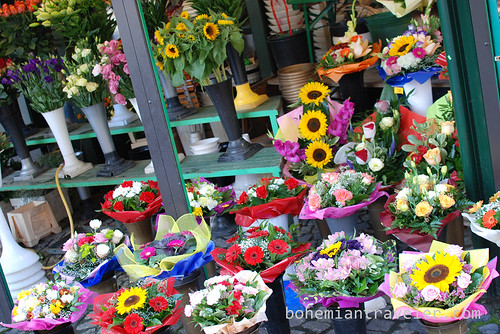 Other things worth knowing about Wroclaw are that the city walls were taken down in the early 19th century when Napoleon came through. This was not such a bad thing, as it allowed the city to grow.

In 1908 the city, wanting to rid the street of merchants, built an indoor Market Hall with huge parabolic concrete arches. It is located a few blocks north of the Rynek and is worth checking out for the structure as well as the meat and fresh produce on offer.

Wroclaw is probably my favorite city in Poland. It’s affordable and highly enjoyable and best of all, not crowded with tourists. You can enjoy a meal or drinks of the main square in the evening without getting ripped off.

My picks: A few of my favorite places around Wroclaw

As far as sites go, I’d definitely recommend climbing the Tower of St. Elizabeth’s Church (5zł.) on the northwest side of the Rynek. The medieval tower has steps leading 90m high with spectacular views over the old town.

You’ll want to visit Cathedral Island (Ostrów Tumski), especially at night to view the gas lamps that light the street. Duck into the Cathedral of St. John the Baptist while you’re there.

For more churches, check out the magnificent Baroque interior of the Name of Jesus Church (Najświętszego Imienia Jezusa) built by the Jesuits. While you’re in the neighborhood, view the other university buildings. 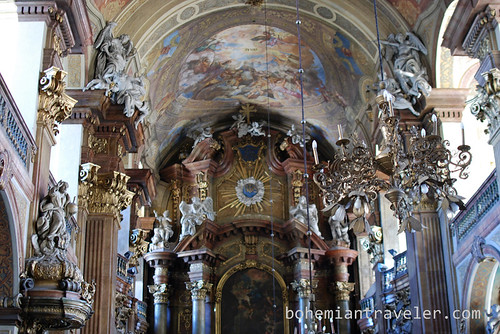 The Baroque interior of Name of Jesus Church.

For contemporary Polish customs, check out the Flower market on Salt Square, adjacent to the Rynek.

I’ll list a few of my favorite places to eat and enjoy a beer in Wroclaw:

For the best pierogi that I had in Poland, head to Pierożek, located southwest of the old city at Marszałka Józefa Piłsudskiego 20. Try the soups and salads too. 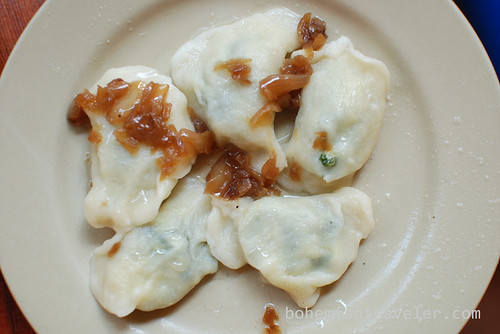 Pierogi from Pierożek in Wroclaw Poland

Bar Bazylia, on Kuźnicza Street at the corner of Universytecki Square is like a little step up from a milk bar. It’s a cafeteria-style eatery but has style and nice big windows. The food is good and reasonably priced.

For beer, go directly to Spiz, on the main square out front of the town hall.  Its microbrewery serves up some delicious beers. In the summertime, sit out on their patio over the cobblestones of the historic Rynek. Great place to spend an evening sampling the lard sandwiches along the six or so varieties of beer.

My Poland trip was supported by Stay Poland. They have hotel and transportation listings on their site and offer group tours as well. Seek them out for any additional Poland travel questions you might have.