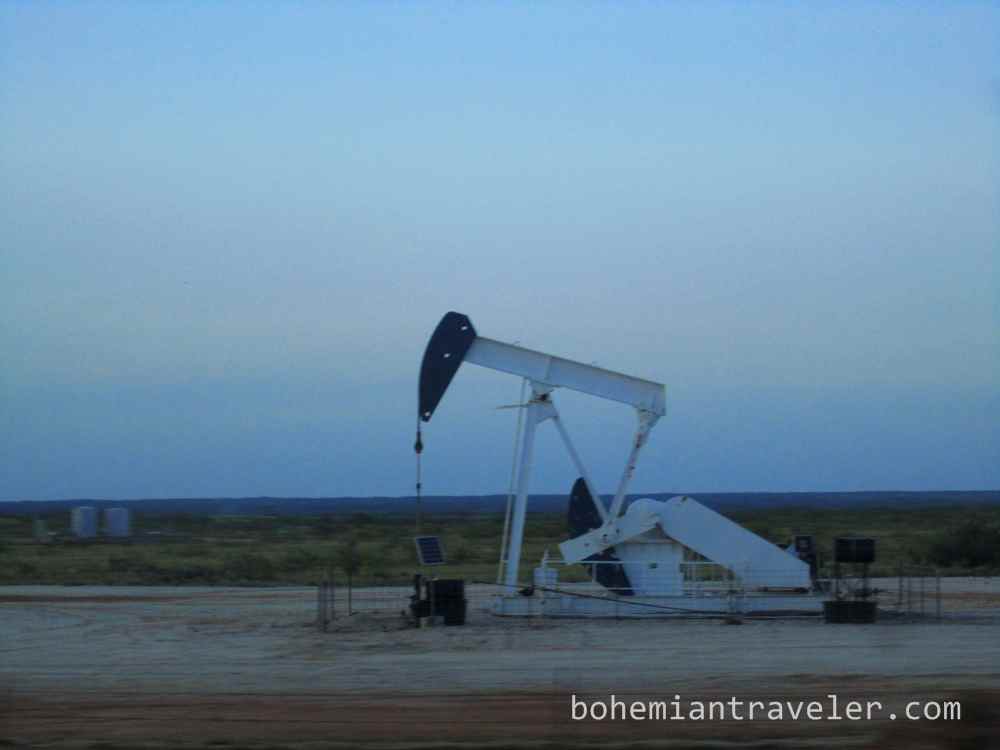 An oil pumpjack in the Oklahoma Panhandle.

Somewhere west of Tulsa the landscape really opened up. Long rolling hills stretched under grazing cows and the occasional oil pumpjack dotted the view.  We’d later learn from Debbie in Perry that the wheat was about ready. Most of the fields were already cut but we saw a few of the enormous combines working to cut and collect the grain. After wheat, many farmers would be planting soybeans.

We could visibly witness the land becoming dryer as we drove closer to the Oklahoma panhandle. Fields of pure grass gave way to prairies dominated by scrub. This is where the Dust bowl of the 1930’s so affected this area of the Great Plains.

At Perry, Oklahoma I steered one block south off of US 65 to the downtown. Its rectangular buildings surround the county courthouse in a horseshoe-shaped three blocks. We saw a hair salon while slowly driving past and upon closer inspection, I saw a “Wednesday Men’s Special” sign hanging on the window.

There is no better way for a traveler to get immediate insight into a place than to head to the barber shop. I’ve done this in countries as far and wide as Portugal and Cambodia. I always leave feeling like I have some better understanding of the place and its people as well as smooth shave or a fresh haircut.

I sat down in the chair at Hair Naturally and immediately asked about ranching and farming. My hairdresser Debbie said yes it was a big industry around here, but the main employer was the Ditch Witch plant. I probably should have known what Ditch Witch was, but I asked anyway. The company produces construction equipment and has a recognizable black-witch-flying-on-a-broomstick-past-the-moon logo.

She told me that her son just graduated with a degree in Animal Science at University, but he was going to look for his first job with an energy company.

“That’s what you gotta do if you wanna make money in Oklahoma.” The other hairdresser chimed in.

I asked about the several closed businesses around the downtown and we compared the struggles of small businesses of the historic downtowns of Perry and of Fredericksburg, VA, from where I traveled. It’s not easy for small business owners here. “People just get on the interstate and ride down to Stillwater or Oklahoma City to shop. And we have our own Wal-Mart now, too.”

As we left a little after five, Debbie closed up the shop for the night and we drove further west on 64. In a little over an hour we reached the Glass Mountains. This was one of the defining “we’ve reached the West” moments. The Glass Mountains are a series of mesas and buttes that rise above the easy rolling hills of this area. We reached this spot as it was nearing sundown and the orange sun lit up the horizon.

The beauty of the scene combined with the emotional high of our westerly progress help us sleep well in the tent that night. We would need the rest for our long drive to Denver the next day.