On America’s Roads: Pushing further West—across the Mississippi to Arkansas 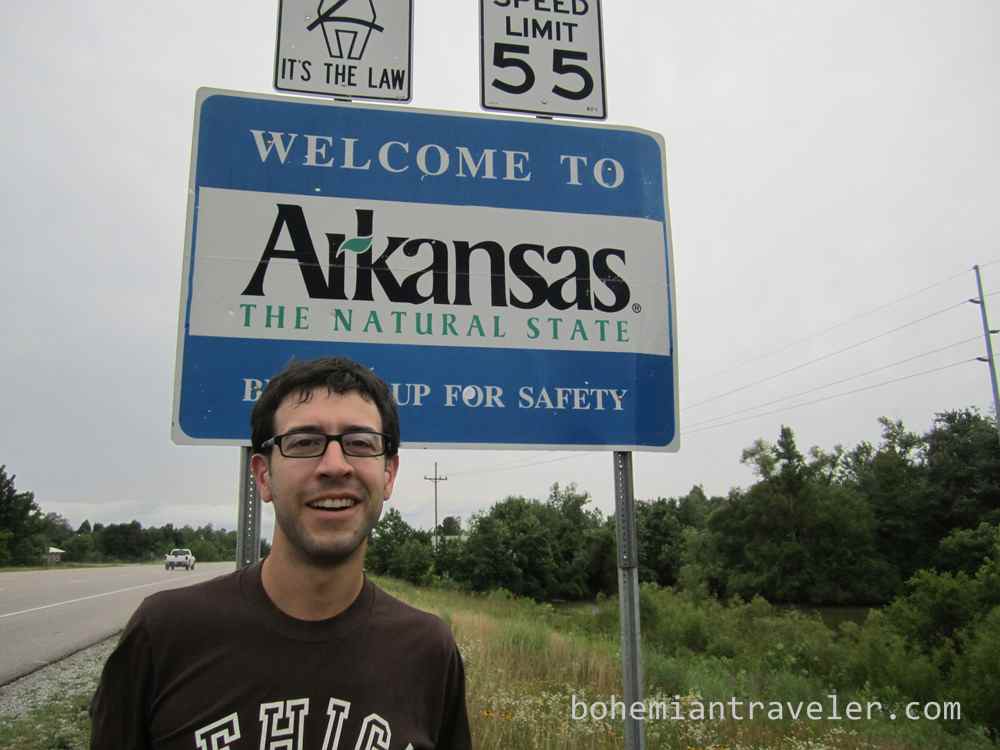 We left Lake Charles State Park before breakfast and made a quick stop at Lynn Supermarket in the small town of Lynn, Arkansas. It’s the kind of business that advertises “Old Fashioned Hometown Service!” in their window and greets each customer as he or she walks in the front door. They’ve also got the checkout register that requires each price to be entered by hand.

We bought a pint of milk and carefully ate a bowl of cereal as we rolled along the rural roads toward the Ozarks. Houses here are small and decaying. Some are boarded up. The side roads are mostly unpaved. This is the reality for much of America’s second poorest state (in front of Mississippi).

We soon entered the Ozark National Forest and got a few scenic glances out over these hills. It had rained the previous day and we saw several three-toed box turtles crossing the road. Each time we pulled the car over and helped them in the direction they we going.

Arkansas is the Natural State and it’s very fitting. Cows roam free range in big rolling fields. Even the milk was free of synthetic hormones. Besides the live turtles, there was plenty of road kill, mostly squirrels and armadillos that I dodged as if I was playing some sort of video game.

There was no shortage of churches in these parts. Even the smallest of towns had a few churches and a municipal building proudly labeled “City Hall” with a temporary sign out front directing folks where to vote. We drove through towns with names like Strawberry, Cave City, Sydney, and Melbourne.

Some churches scared us with “Where will you spend eternity?” posted to their public sign board. Others like First Baptist Church in Cave City proclaimed: “Want Home Improvement? Bring U’r Family to Church”. The Frist Assembly of God church in Harriet let us know that: “Jesus is coming soon. Don’t miss it for the world.”

For parts of the day we followed Arkansas’ Civil War Trail and the Cherokee’s Trail of Tears. Fifteen thousand Cherokee Indians used this route during a forced migration to Oklahoma in the 1830’s.

Soon we descended into the Buffalo River—proclaimed America’s first National River in 1972 and administered by the National Park Service. It’s known for being one of the last remaining unpolluted and undammed rivers in the lower forty-eight.

I know I’ve never swum in a river so pure. The water was crystal clear and fish of all sizes swam nearby while groups canoeing paddled by. I had the urge to delay life and this trip for four days and paddle down the whole waterway. But at this time it wasn’t possible, so we dried off underneath the warm Arkansas sun and got back in the car to continue further west.