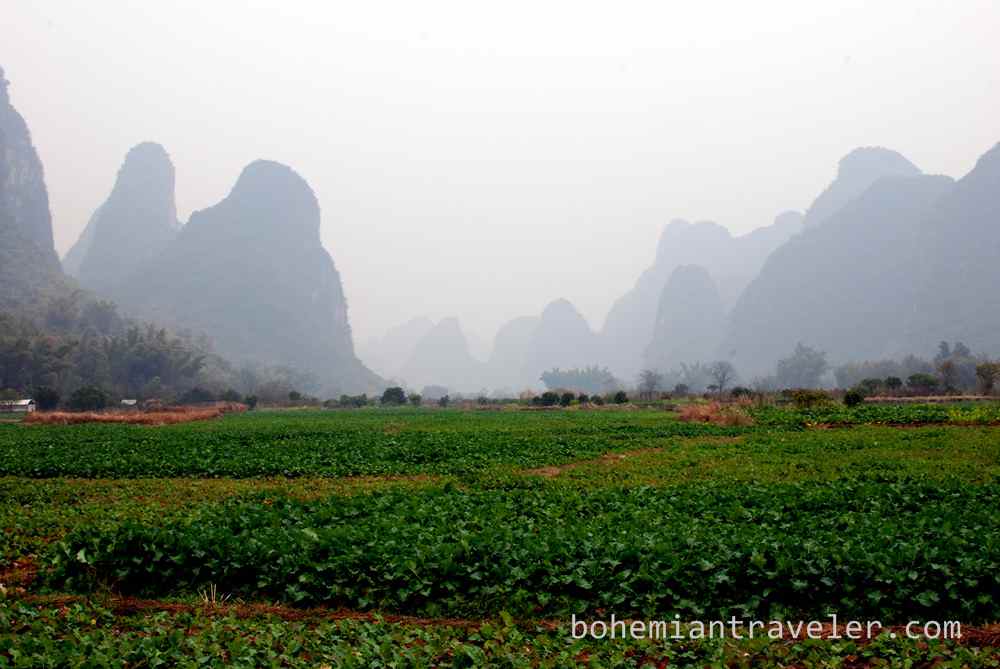 The scenery around Yangshuo, Guangxi, China

Cycling is one of the best ways to see the countryside surrounding Yangshuo, China. The region is famous for the dreamlike limestone mountains that dot Guangxi  Province. There are plenty of routes in every direction, but highly recommended is cycling along the Yulong River to the 600-year-old Dragon bridge.

We visited in January when the temperatures are cool and visibility wasn’t great. But we still had an enjoyable day out: passing farms, villages, and navigating our way over the narrow roads and dirt tracks. Water buffalo and cows grazed the fields. Rice paddies lay fallow. Most of the greens of spring and summer were a pale yellow—not vivid enough for stunning photography. All the photos I had previously seen of the Yulong River Valley were a vibrant shade of green.

From Yangshuo we cycled west out of town to the village of Jima, found a route along the Yulong River and slowly peddled our way up to Yulong Qiao (Dragon Bridge). It is a large, high, single-arch stone bridge, withstanding 600 years of foot traffic.

The bridge, combined with the scenery and villages was well worth the half-day outing, 20+ km of cycling. A village and fields outside of Yangshuo. Farms and mountains outside of Yangshuo, China. Looking up over Dragon Bridge Bamboo rafts on the Yulong River. A farm and mountains around Yangshuo View of the limestone mountains of Guangxi Province View of the Yulong River from Dragon Bridge. Cycling through the countryside around Yangshuo.