Far outside the suburbs of Gwangju, in southwestern Korea, is the May 18th National Cemetery. Visiting is a moving experience—sad, beautiful, inspirational. In May of 1980 demonstrators of the democratic uprising were gunned down in the streets of Gwangju while protesting the newly declared martial law. 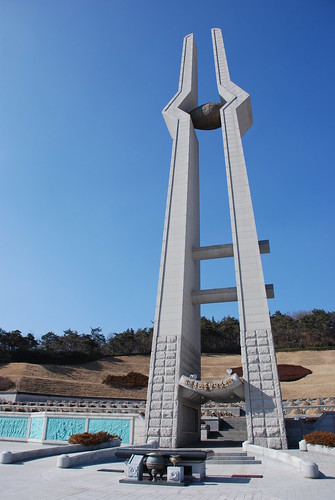 Officially there were 259 dead, 3,549 injured, and 64 missing, but many believe the actual numbers are much higher. The cemetery and monuments are spread out on a huge plot of land. The 40-meter-tall memorial tower, combining elements of traditional and modern architecture, rises above the new cemetery. The bodies have been reburied below, moved from a public cemetery up the road. The inside photographic memorial house displays photos of the faces of those who died. The nearby exhibition hall presents more details and gruesome remnants as well as photos of this time of military aggression and bloodshed.

There I watched a video documentary of the uprising and ensuing violence. It was brutal and difficult to imagine. But I somehow left with hope that we live in better times.

In the morning, my host Renee had told me to meet her father at his work at 5pm. On a sticky note her mom scribbled the address of the used car dealership that he runs and I carefully put it inside my wallet. At 4:57 I hopped in a cab and was racing through traffic to the west side of the city. South Korea’s six-largest city, Gwangju is enormous and very spread out. 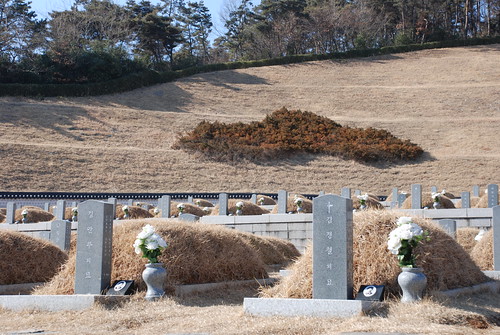 I arrived at the dealership at about 5:15 and then sat there waiting in his office for another hour. I was told we would be getting something to eat. But since I don’t speak any Korean and he speaks no English, there was little way for us to communicate besides grunting, smiling and hand movements.

Of all the cars in his lot, he chooses to drive the Hyundai Limousine van, a family van of sorts with televisions, spacious open area, and leather seats that face one another. We stepped up into the van, clicked on the heated seats, and he started the car. We sat there as he flipped through the television stations until coming to one he liked and then from the glove compartment he pulled out what appeared to be a handgun in a leather holster. Weird. I didn’t think handguns were common or even legal here. He held it up, looked and me and laughed, and them put it back. How odd.

We hung a left out of the car lot, drove through an industrial zone and 15 minutes later entered a toll road. After another 15 minutes I’m wondering where we are headed. I thought we were just meeting his wife somewhere for dinner in the city. It is clear we have left Gwangju and are headed for another town. Are we going to the family condo near Jiri-San National Park? Leaving for the weekend? I thought I told them I was continuing north on my travels in the morning? I don’t have my toothpaste, nightclothes.

Finally, I pulled out my guidebook and asked “where” in Korean. Hampyeong he tells me, “Right here.”  And points. We exited the highway, payed our toll and arrive in town. There is a giant butterfly made of colorful lights on the hillside and I would later find out that he was explaining to me that there is a popular butterfly festival here each year. 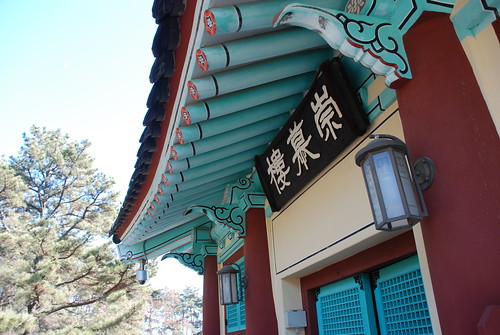 Hampyeong is not a large town (although they say up to a million people come for the butterfly festival). We pull up next to a building with a red neon cross on top of it. We enter. It is a church that resembles none other I’ve seen—low ceilings, florescent lights, a half-filled congregation of mostly older people. The service has started already. We grabbed envelopes which he stuffed ten-thousand won notes into and hands me a pencil asking me to write my name on the back of one of them.

We took a seat in the front row on the right side, behind the piano. The woman leading the singing shuffled between the piano and organ, taking off her shoes each time she crossed the altar to reach the organ. The songs were cheery and the worshippers smiled and clapped offbeat. After a few songs, the minister started preaching. 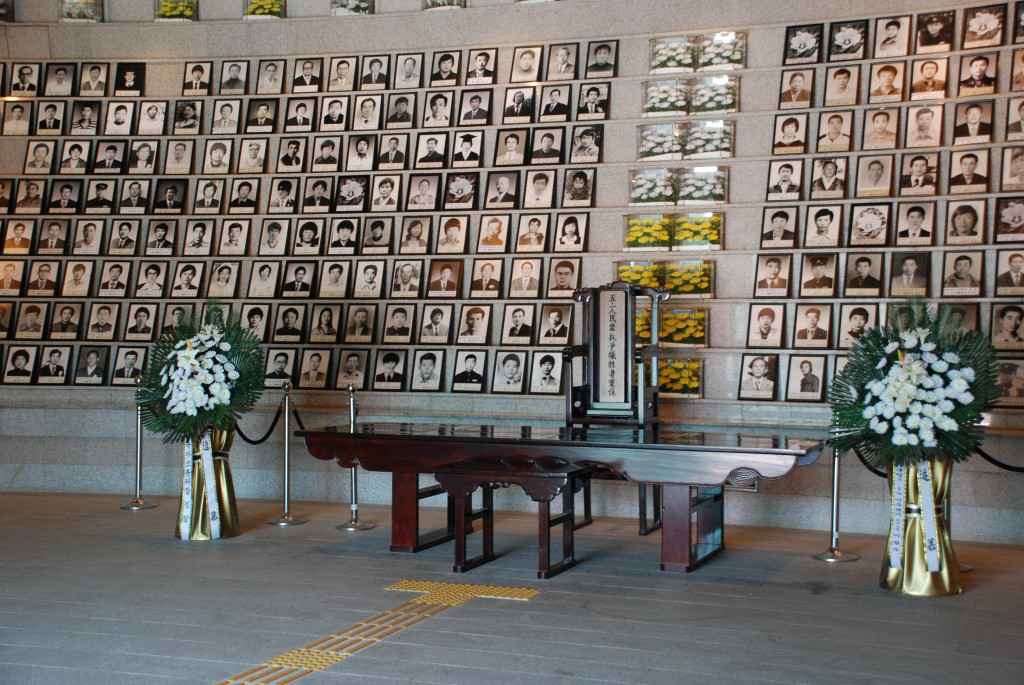 He was fervent, loud, charismatic. He spoke in short, bold statements. In between people said “amen” or “halleluiah”—the only words I could make out. It’s like some preacher I have seen on cable television back in the States, except this is live, and in Korean.

At the end of the service, the minister pointed the new face out and welcomed me in front of the congregation. I stood up and thanked them for inviting me to worship with them. I told them where I’m from and everyone claps. On the way out of church I shook a lot of hands and greeted many smiling faces.

View more photos from my three days in Gwangju.