What I actually found when I arrived

The representatives from camp never came to the Jeju airport to pick me up. In the waiting room of the small airport I sat for an hour past the time they were supposed to arrive, but they didn’t show up. Was this an omen for things to come? 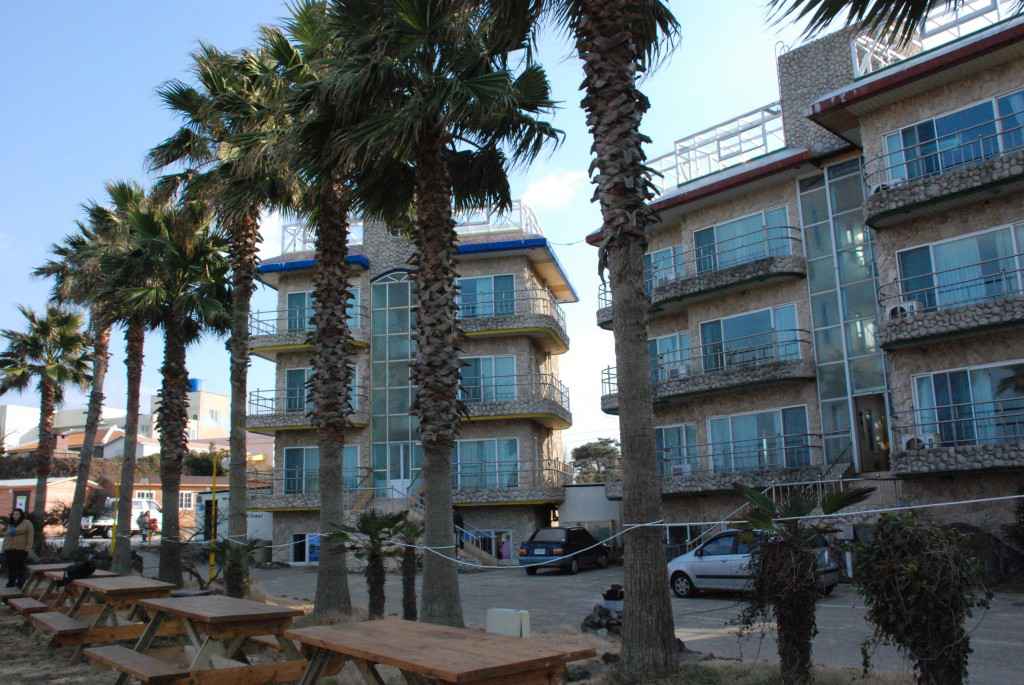 After making a few phone calls to get the right person, I was told to leave the airport at Gate 4. Gate 4 was under construction, so I moved along to Gate 5 and there was the taxi waiting.

When I got inside and we drove away, I had no idea where this place was that we were going. Nor did I even know what it was. We continued far out of Jeju City and after 20 minutes made a left-hand turn down a smaller road.

At about 11:15pm I saw a sign that read: Jeju International English Village. That’s where the taxi dropped me off.

The director came outside immediately. He bowed. “Soddy, soddy. So soddy.” He apologized.

The wind was ripping through at what I estimate to be about 30 or 40 mph. I looked around. There are a bunch of prefab buildings as well as three four-story dormitories.

Fatigued from three flights totaling about 20 hours, I tried to get some sleep despite my concerns regarding all this apparent disorganization. I fall asleep wondering how they could have forgotten to pick me up and if this level of chaos will persist through the next five weeks. 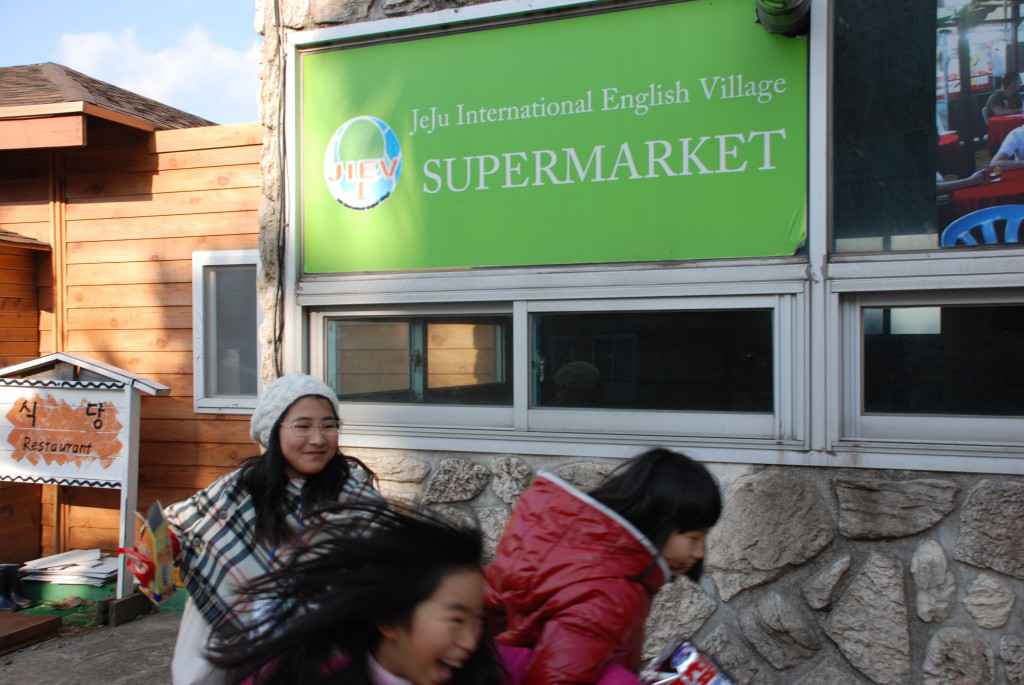 In the morning a little more organization surfaced. And some more good news: I have an ocean view from my second-story room. I’ve arrived on day two of a week-long camp. I won’t have any English teaching duties this week. Alternatively I will act as an in between lesson referee, a meal server, and a presentation consultant.

The following week a new camp started. Some students are here for a one week session, others for two weeks, and still others for all four weeks. Four weeks of English camp! Can you imagine being a middle school student and flying off to boarding camp for a whole month to study English during your holiday? 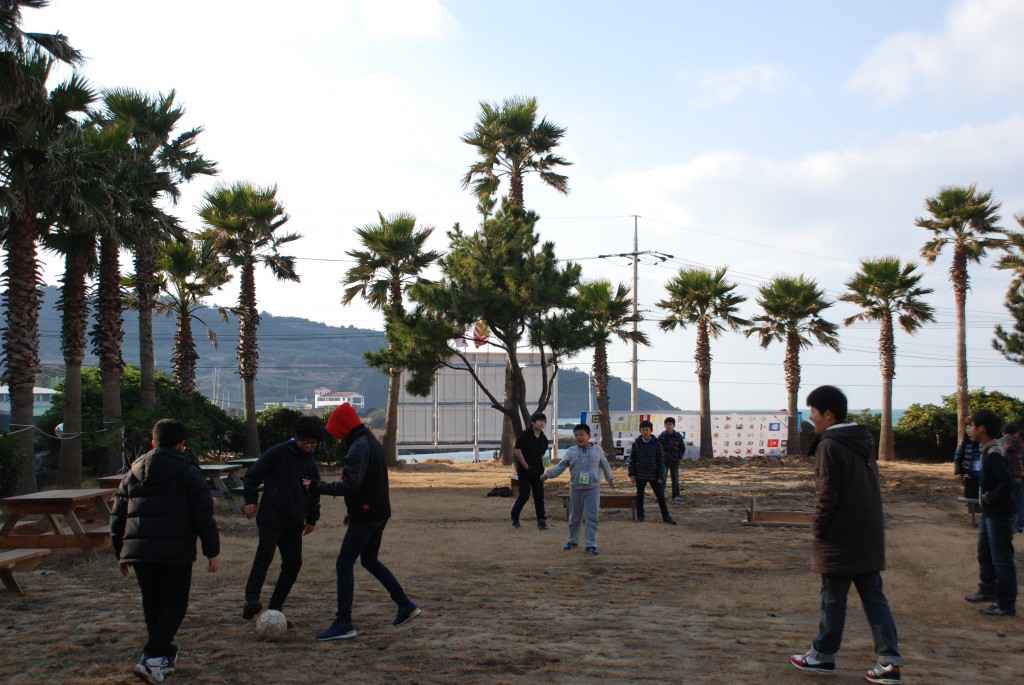 Students play in between lessons at Jeju International English Village

During this week, lessons run from nine to five and I covered the topics of “hotel” and “bank”.  In the period from 4 to 5pm, I helped my home team, who named themselves the “Eagles” practice their team song, dance, and slogan.

Our weekly field trip involved an excursion to a folk village, a tangerine farm, horseback riding, and the anti-Japanese movement memorial park.

The camp takes place in what is called the Jeju International English Village—a few old pensions that were bought up and encircled with some cheap temporary structures like “the igloo” and five double-wide, extra short trailers that act as classrooms. It is located in the small seaside village of Buckchon-ri, about 25 minutes east of Jeju City.

Despite the wood stoves and electric and kerosene heaters, it can still be quite cold in the rooms, especially when 150 people pile into the small cafeteria and the cold breeze whips through the door.

The food is actually quite good. Foreign cuisine always seems to cook better for large groups. Overall the diet is rather healthy—lots of fish and meat and mostly real (unprocessed) food in general. Rice and kimchi are served at every meal—even breakfast! Consuming rice three meals a day is definitely something my body is not used to dealing with. 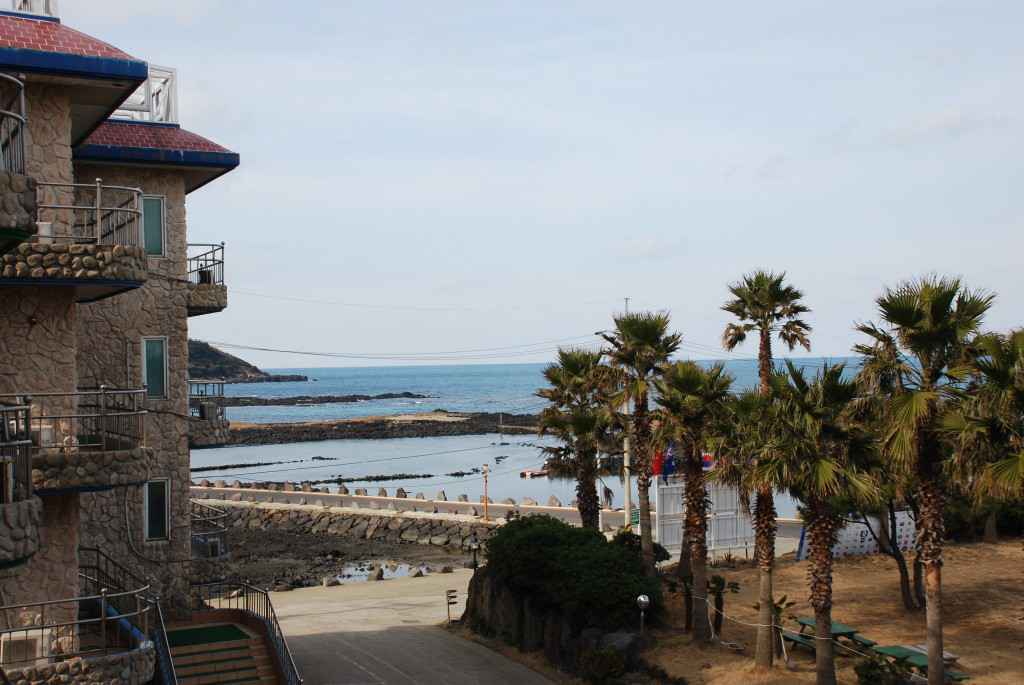 The sea view from my window at Jeju International English Village

Our accommodation is in an apartment building about a block from the sea with our window facing out to the water and consequently into the strong winds as well. Our building’s front door has already blown in two times. Last night at 5am we all woke up when the glass shattered loudly against the tile floor in the hallway.

Temperatures remain above freezing most of the time, but 40 degrees Fahrenheit complemented with a 30 mph wind makes for a pretty cold existence.

When my classes end at 5pm I like to take a walk along the sea before it gets dark. If it’s too windy I’ll walk through the windy roads of the village which are more protected by the high black volcanic-rock walls which surround all the houses.

In my next post, I’d like to take you for a photo tour through Buckchon-ri, the little run-of-the-mill fishing village that is my home for the next few weeks.