A walk around Milan Monumental Cemetery 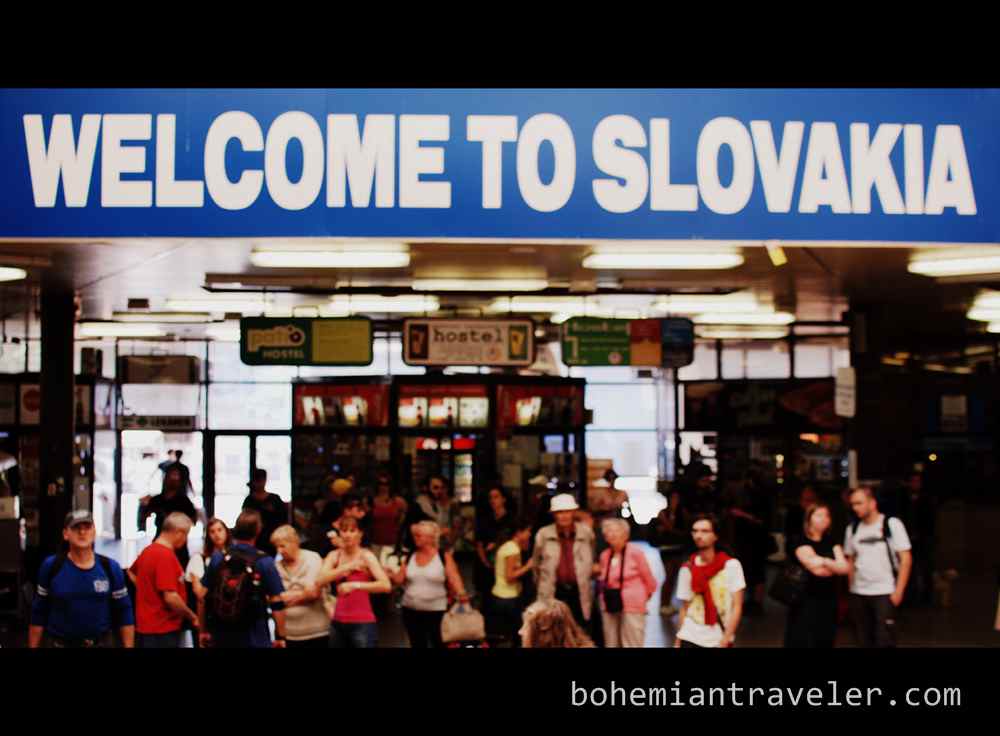 When it was time to leave Olomouc, an under-appreciated city in eastern Czech Republic, I had an idea. Instead of going directly to Prague, why not take advantage of our Eurail passes and detour to another city before reaching Prague?

I was a little disappointed having not been able to visit Bratislava during our three-day stop in central Slovakia the previous week. With our Eurail Global pass, the cost would be no different to zip south into the capital of Slovakia. Decision made: I would be going to Bratislava.

Juno, on the other hand, had decided to make Vienna her stop. (You can read about her Vienna adventure here) Just 65 kilometers west of Bratislava, the capital of Austria was roughly the same distance from Olomouc. After all, the city is famous for its music, architecture, and coffee culture. We would compare notes at the end of the day when we reached Prague.

After validating our Eurail passes we each boarded separate trains. It was an early Sunday morning and many of the passengers getting on my train were decked out in spandex, hoisting their mountain bikes onto the train before a day of riding. I changed trains in Břeclav, the last station in the Czech Republic. The next train I boarded to Bratislava was sleeker, a EuroCity (EC) bound for Budapest. Part of me entertained the thought of riding all the way to Budapest, but the extra 2 ½ hours in transit would have allowed me almost no time to explore that city. 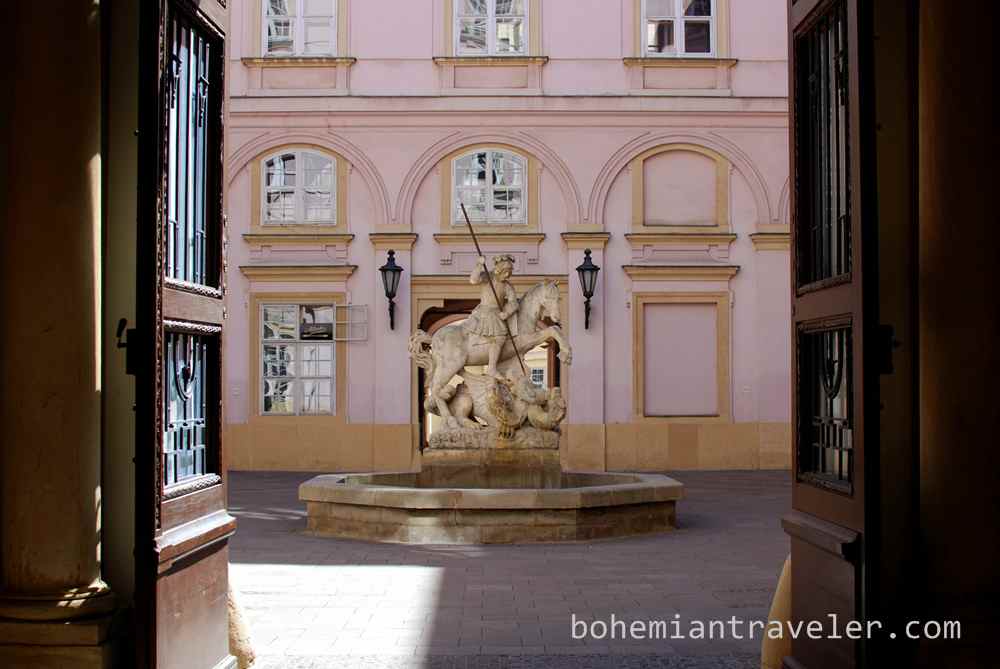 Bratislava is the capital of Slovakia. I regard Slovakia as the underdog of Europe. Few people travel there, focusing instead on the more well-known Czech Republic, and others simply forget it exists. Slovakia gained independence in 1993 when Czechoslovakia peacefully split in what became known as the “Velvet Revolution”. Bratislava is the world’s only capital that borders two independent nations: Austria and Hungary.

Juno and I decided to compare our day in Bratislava and Vienna with a number of predetermined criteria. I was slightly envious about her seeing Vienna, a place I’ve never been. But I was happy to be visiting the capital of the country from where my paternal grandmother’s family originated. 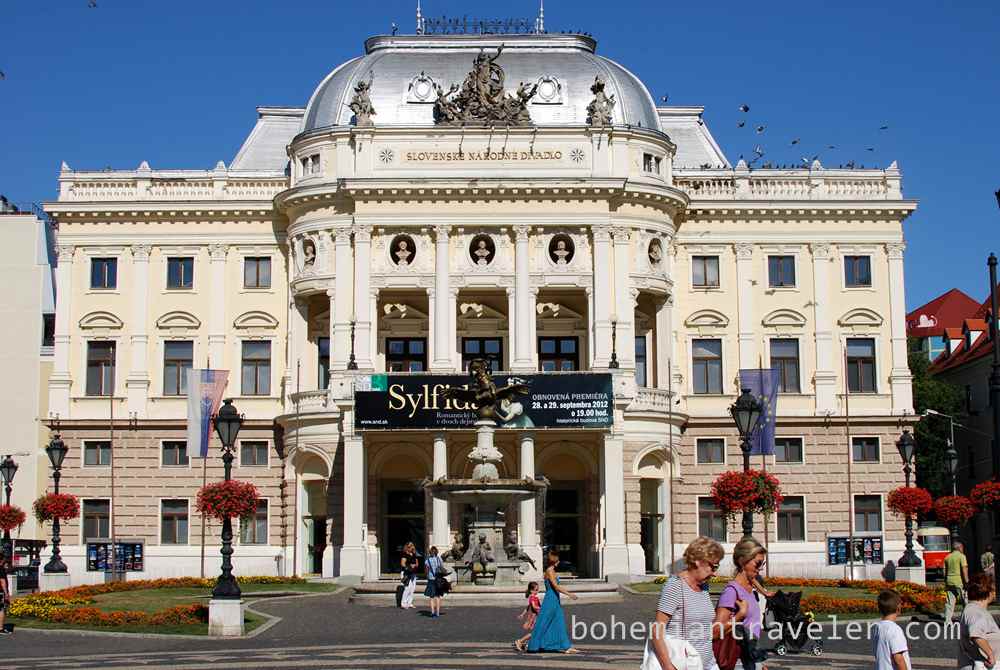 Walk into the city

It was little more than a kilometer into the city center from the train station. I had no map, I just followed my instincts. Soon enough I saw a useful sign and arrow pointing me to the centrum. Up until this point I didn’t think I was going to like Bratislava; the streets seemed dead and lacked character. But you should never judge a city by the walk into town from the train station. (I’m also not going to judge the city after a three-hour visit at the end of the day. Any city deserves more than that.) 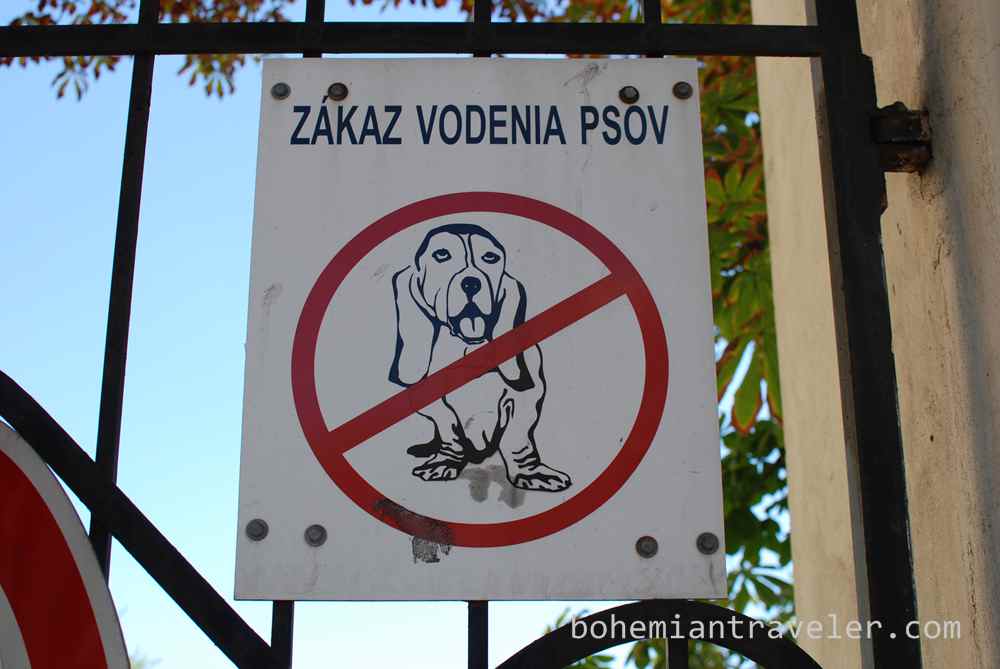 I failed my first mission: have a coffee. I found a nice café but was eager to explore the city by foot. I entered through St. Michael’s Gate and continued down Michalska and Venturska, two halves of one street lined with stately Baroque palaces, the university library, and lots of restaurants and cafes. After 30 minutes I was ready for lunch. 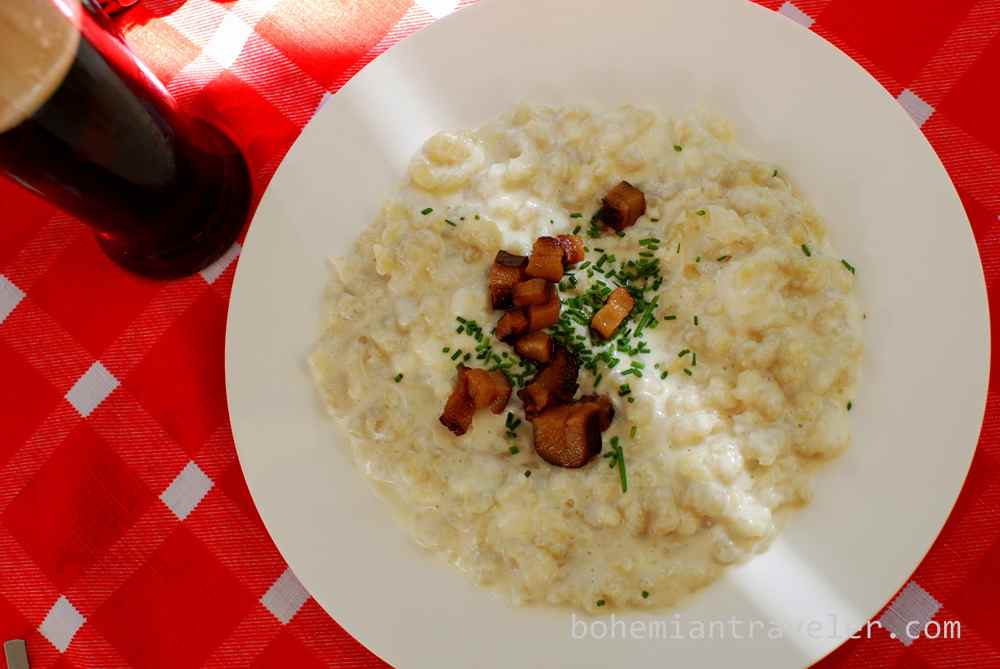 Skip to number two. As per our requirement to eat local food, I was really predictable. I ate the national dish: halushki. I know I’d only be in Slovakia a couple more hours, and I couldn’t resist the chewy gnocchi-like potato dumplings smothered in creamy sheep’s-milk cheese topped with fried pieces of bacon fat.

Photo of a famous landmark 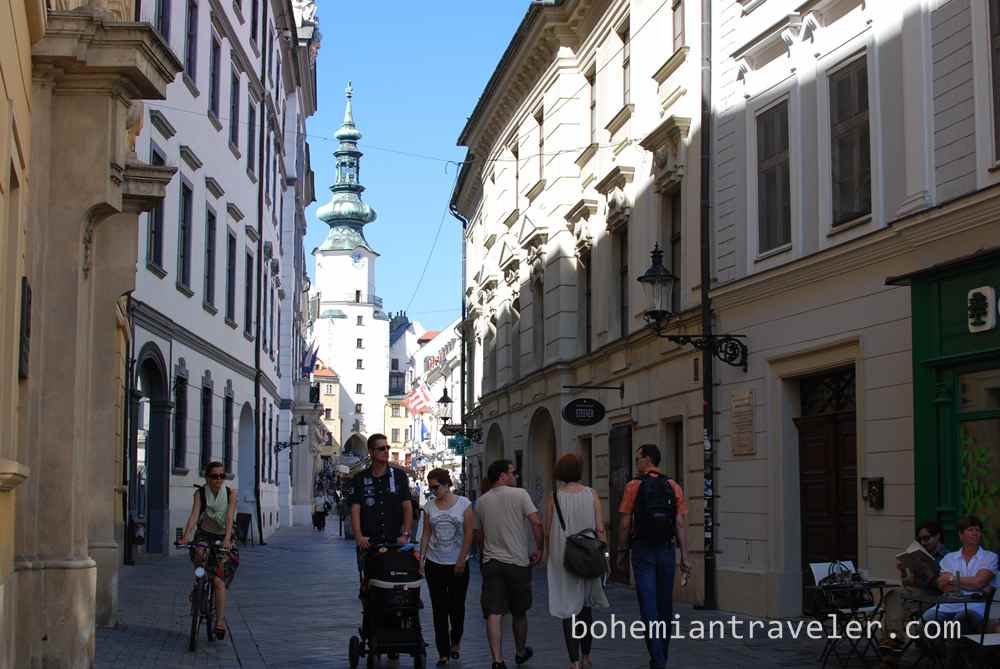 For the famous landmark, I chose Michalska brana a veza, or St. Michael’s Gate and Tower. It dates from the medieval times. You can climb it, but I didn’t have time. Michael’s Gate is the only city gate that has been preserved of the medieval fortifications and is considered among the oldest buildings in town. Built in approximately 1300, its present shape is the result of baroque reconstructions in 1758, when the statue of St. Michael and the Dragon was placed on its top.

Defines the character of Bratislava 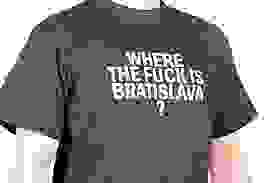 A Slovak Design Kiosk on the park in front of the National theatre had a number of clever tee-shirts for sale. I’m going to relay how they’ve defined their city, as a place of obscurity. Although I’d never wear it, the shirt was kind of funny. It just read: Where the f*ck is Bratislava? 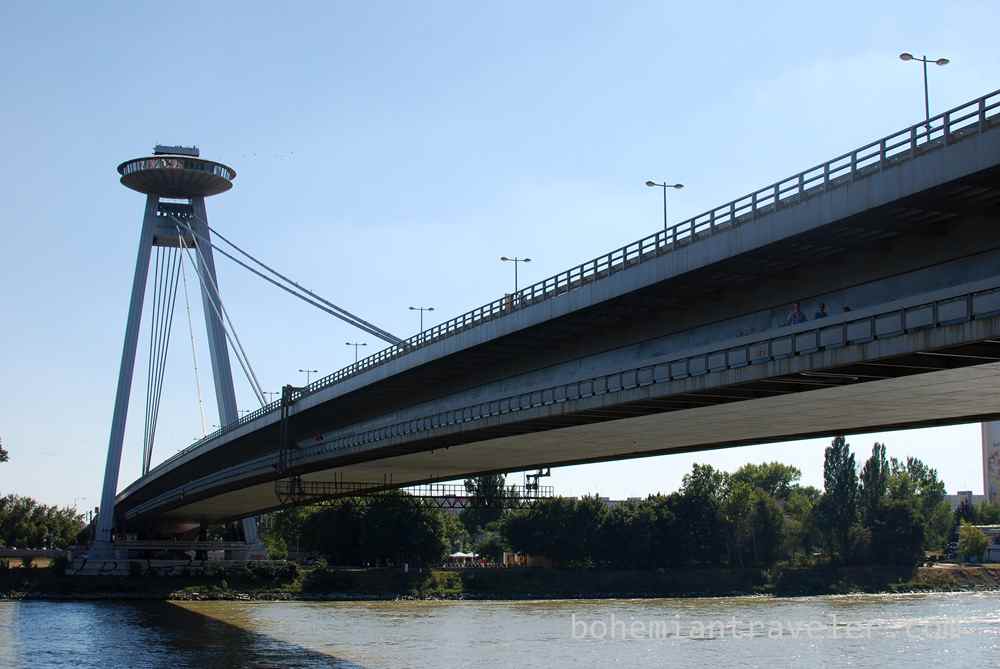 Novy most bridge over the Danube River in Bratislava

And by funny, I mean totally, hilariously, disgusting. Never has a bridge made me so uneasy, so upset. I pity the Bratislavans for having to live with this hideous monument to repulsiveness. What I’m talking about Nový most, the bridge across the Danube.Because Nový most has left such a horrific visual aftertaste, I going to give you some dessert in the form of another good tee-shirt that I saw for sale: Slovak Drinking Team. 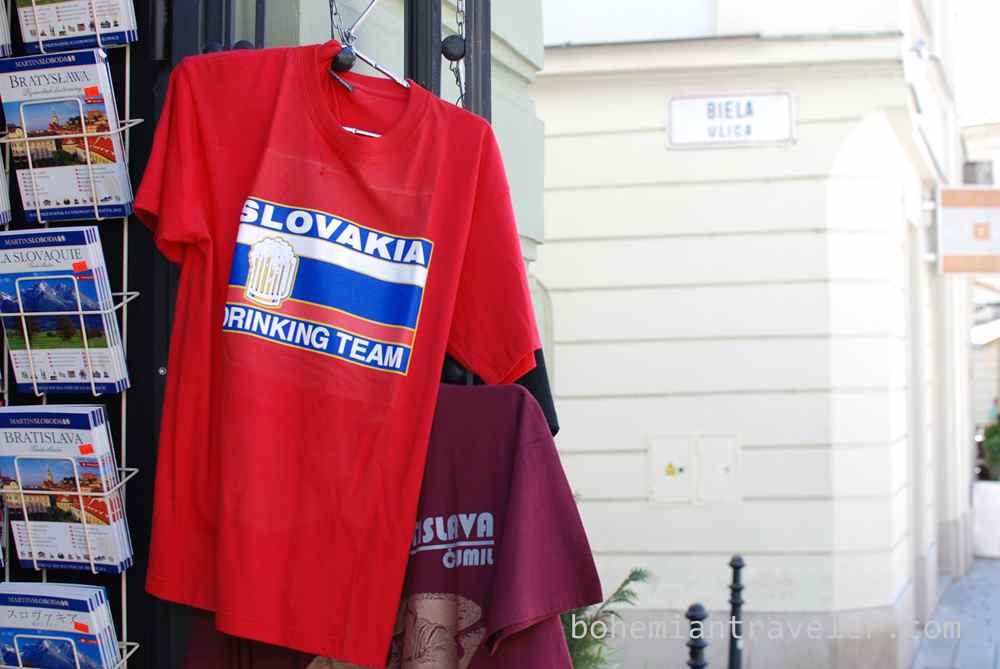 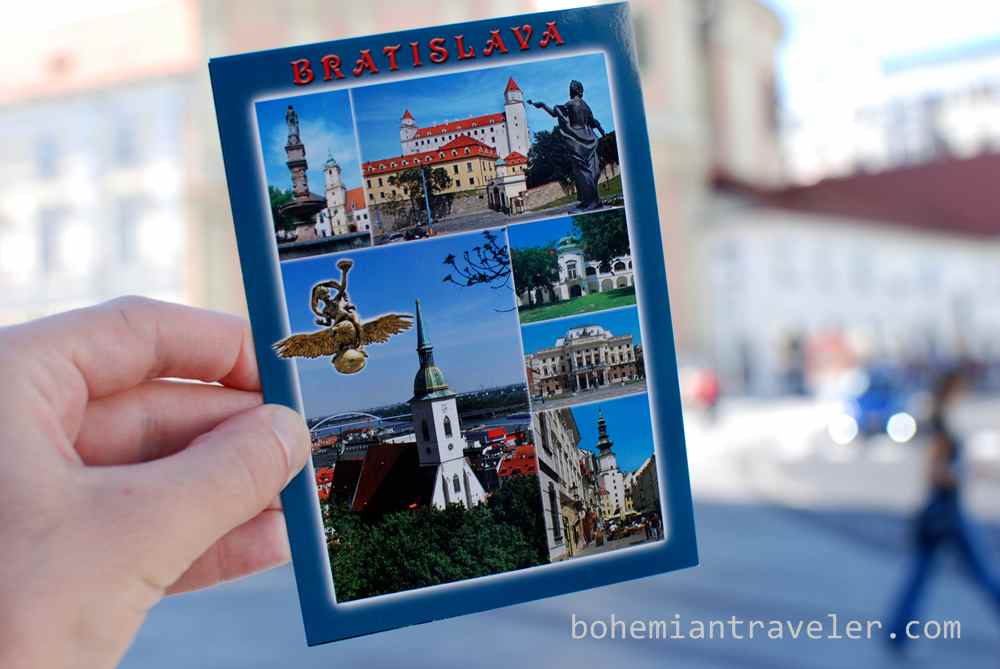 my postcard to Juno from Bratislava

I thought I’d run into some difficulties finding stamps on a Sunday afternoon, but I was wrong. The newspaper shops and tobacconist sell stamps. I got this one off to Juno before my train rolled out to Prague.

Photo from the Train 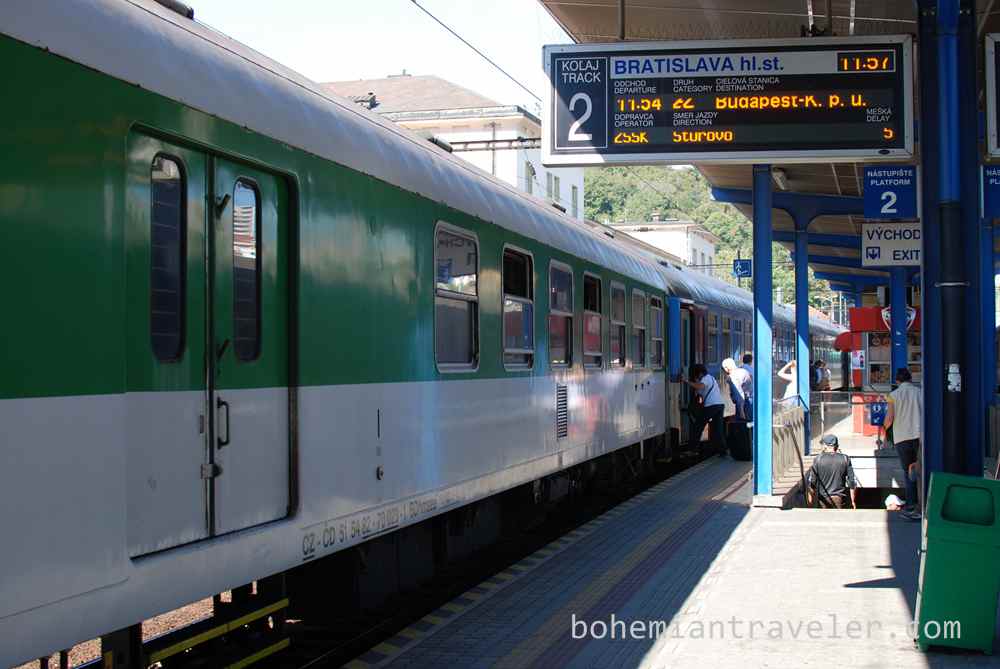 train at the station in Bratislava

Lastly, I bring you the photo from the train. I shot this at Bratislava main station. Train stations in Slovakia and the Czech Republic can be very dated, so dated you’ll feel like you’ve been time-warped back to Communist times. I was a bit shocked at some of the provincial station I passed through in and around Cadca. Bratislava’s, however, was up-to-date .

Would you rather have gone to Vienna with Juno, or with me to Bratislava?

Disclosure:  Eurail.com provided me with a complimentary rail pass. As always, the opinions expressed here are my own.