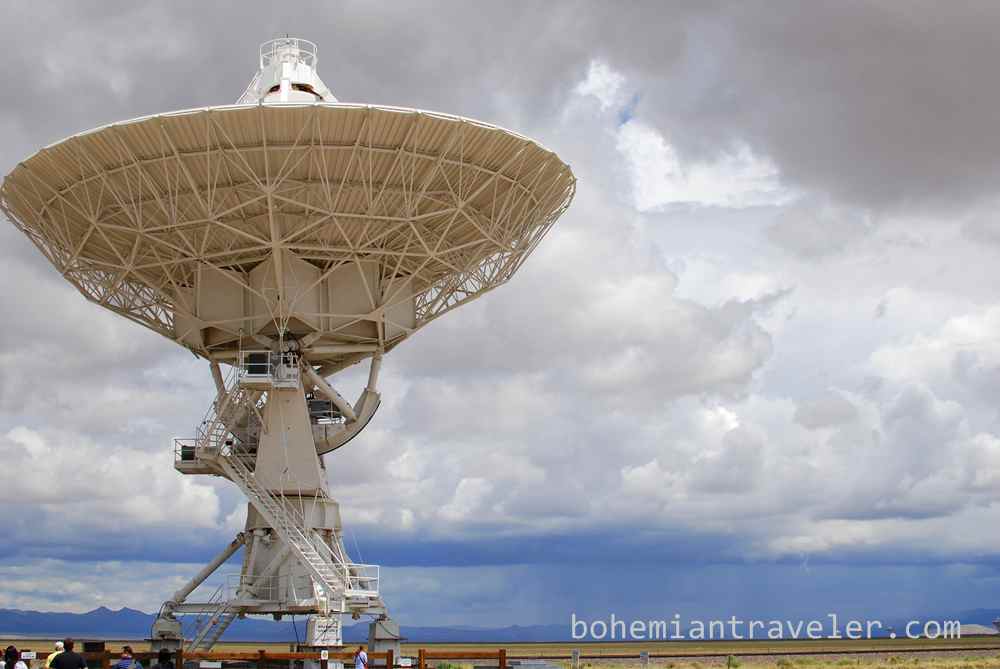 Navigating our road trip to the Very Large Array

At dusk the evening before, we made a scramble for free camping in The Box. There is little information for The Box Canyon along Route 60, both online and at the actual site. It is Bureau of Land Management (BLM) land, and that should be information enough. This little piece of info means we can camp pretty much anywhere on that land for no fee.

At about 8pm we blew right past the turnoff for The Box. The road was signposted, but not from Rt. 60. You had to look down the turnoff to see. It was a beautiful little canyon, favored by local rock climbers. We drove down the rough gravel road a little farther than our Honda Accord would have liked. Seeing no feasible place to pitch a tent (besides on the top of a hill before a potential thunderstorm), we turned around.

On the way out we saw some rock climbers with their all-wheel drive sticker-covered Subarus parked on the roadside. They were in the canyon and I cupped my hands and my voice rang out to them, echoing back to me. For camping, they yelled to me, I’d want to drive another 6 miles up toward Magdalena. “Turn off at Water Canyon” was the most important part I heard as a car whizzed by drowning out whatever else the climber said.

At dusk we found the Water Canyon camping turnoff easily enough and wound our way up the mountain about five miles. There we had our choice of spots at the established camping area that was absolutely empty on this Friday night. Apparently it’s a nice place to hike and mountain bike, but the July monsoon had already arrived. Is that the reason no one was here? Or was it simply our remote location? 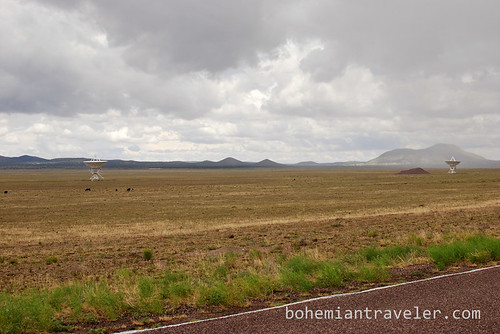 The next morning we awoke in plenty of time. Today we would be making childhood dreams come true. But not mine. Juno had been dreaming about visiting the Very Large Array (VLA) since she was a young girl. The movie Contact only amplified this desire.

The VLA is a series of radio telescopes way out in the New Mexico desert west of Socorro. In a super-simplified explanation, radio telescopes receive radio waves and other forms of non-visible light as opposed to an optical telescope which can only show us what we can interpret with our eyes. In the case of VLA, the 27 enormous telescopes can work together as one to become even more powerful.

The reason I’m telling you all this is to point out how good it can be to travel with someone else. Their interests lead you to entirely different places than you might have visited. So I thank Juno for bringing astronomy and science into my life and this trip. You can read her post about visiting the VLA on her blog RunawayJuno.com. 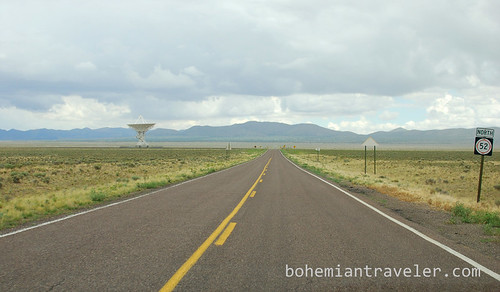 View from the road leading to the Very Large Array, west of Socorro, New Mexico (USA)

It’s a long strait road out of VLA and I probably could have easily brought the car over 100 mph if I did that sort of thing. But I don’t.  We passed through Magdalena on the way and it appears to be a ghost town of sorts, but it is not. It did have its mineral-infused heyday starting in 1883 when the Kelly Mine opened. Today artists have made residences and galleries and there’s a little box car museum and a restaurant, coffee shop and some antique stores.

Before hopping on the Interstate for one exit to connect to Rt 380, we stopped at Frank and Luppe’s Restaurant in Socorro for one of our last chances for New Mexican cuisine.  The Mexican food binge would continue in Texas, but New Mexican would end sooner.

Socorro is a weird town. I know weird is not a good descriptive word for a place. We had picked up a few brochures of the town, showing us all the historic sites and interesting places but by far the most interesting of them all was a 14-inch-thick fragment of Jumbo—a steel vessel that was built to contain the world’s first nuclear explosion.

The town was mostly a strip along a stretch of highway with a historic plaza set back a block. That had potential, but there just weren’t any people around. I know New Mexico Institute of Mining and Technology is out of session but still, it’s a Saturday in the summer. Most of the shops were closed. Wind blew dust through the square like a parched Wild West town. 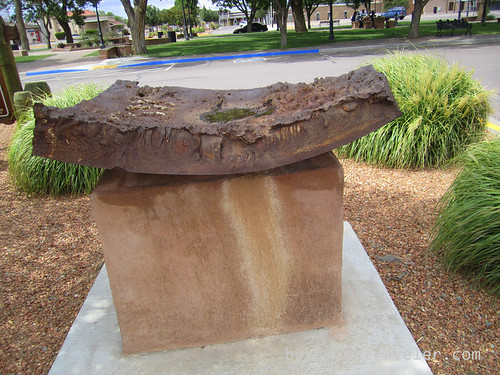 A fragment of Jumbo, built to contain the world’s first atomic bomb.

Back on the road, we passed the Trinity Site on the side of Rt. 380 and got our picture next to the plaque. The Trinity Site is the location of the world’s first atomic bomb explosion on July 16th, 1945. Most of this bomb was developed by a bunch of physicists up the road in Los Alamos as part of the Manhattan Project.

Past the Trinity Site, down a lonely stretch of road, you cross a lava flow four to six miles wide, 160 feet thick covering 125 square miles. It’s considered to be one of the youngest lava flows in the continental United States—less than 5,000 years old. 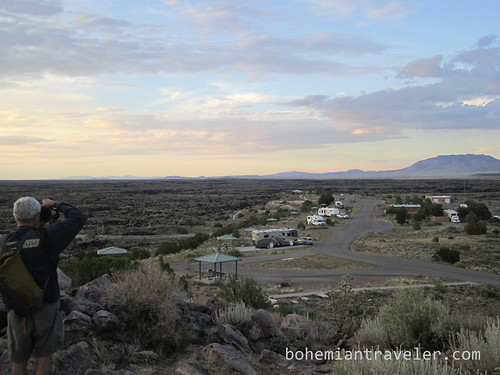 Sunset view over the Valley of Fires in New Mexico (USA).

There is a great campground at the BLM administered park area and for only $8 we pitched our tent on the high ground of soil and sandstone that rises above the hardened black Pahoehoe. The site is called Valley of Fires Recreation Area and you should camp there if you’re ever in the area. We finished the night with a sunset view over the lava flow and surrounding mountains from the high point.