The short answer to this question is that a good friend of mine has parents that live in Oak Ridge, Tennessee. I had never met them, and he suggested we stop to visit. But Oak Ridge had a far more interesting story than I could have imagined.

Before 1942 Oak Ridge was home to just a few famers. Then the government came in one day and told these approximately 1,000 families they would have to relocate. Even though they were compensated, most we not happy.

Others that may or may not have been happy were the thousands of families that got relocated to Oak Ridge for employment immediately following this. They were not told what they were doing other than working towards a very important government goal. Some of them had no choice.

What was this government undertaking?

The Manhattan Project. The world would not find out about the Manhattan Project until years later, but Oak Ridge was its headquarters. Oak Ridge, also known as the “Secret City” or the “Atomic City” was responsible for separating the fissile isotope uranium-235 from natural uranium. For this they built three separate plants: K-25, S-50, and Y-12 on 60,000 acres of land. Each was built around Oak Ridge separated by small mountains in case any of the plants had accidents.

The other key components to the Manhattan Project were the Hanford Site (Site-W) in a remote location of Washington State and Los Alamos, New Mexico (Site-Y) where the mission to build the world’s first nuclear bomb concluded.

The Hanford Site was home to the B Reactor, the first full-scale plutonium production reactor in the world. The actual first bomb was detonated at the Trinity Site in New Mexico (which we had passed by a couple weeks earlier) far south of Los Alamos. 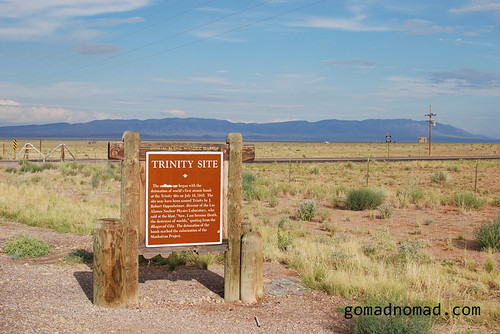 Who was involved in the Manhattan Project?

The Manhattan Project had its origins in 1939 when physics Leó Szilárd and Eugene Wigner drafted the Einstein–Szilárd letter, which warned of the potential Nazi Germany development of “extremely powerful bombs of a new type”. It urged the United States to take steps to acquire stockpiles of uranium ore and accelerate the research of Enrico Fermi and others into nuclear chain reactions.

The world’s best physicists and other scientists were recruited into the Manhattan Project. It was far more than an American development; but collaboration with Great Britain.

The project was so secretive that not even Vice President Harry Truman knew about it when he assumed the job of President after Franklin D. Roosevelt died in office.

Until August 31st 2012, the museum is running a public bus tour the US Department of Energy’s Oak Ridge Facilities. For more info: http://amse.org/ I wasn’t able to go on the tour because I was with a foreign national.

Many thanks to Mr. and Mrs. Thomason for showing us around Oak Ridge and trying to explain all the incredibly complicated sciency stuff.

Have you been to any of the Manhattan Project sites? Your thoughts?