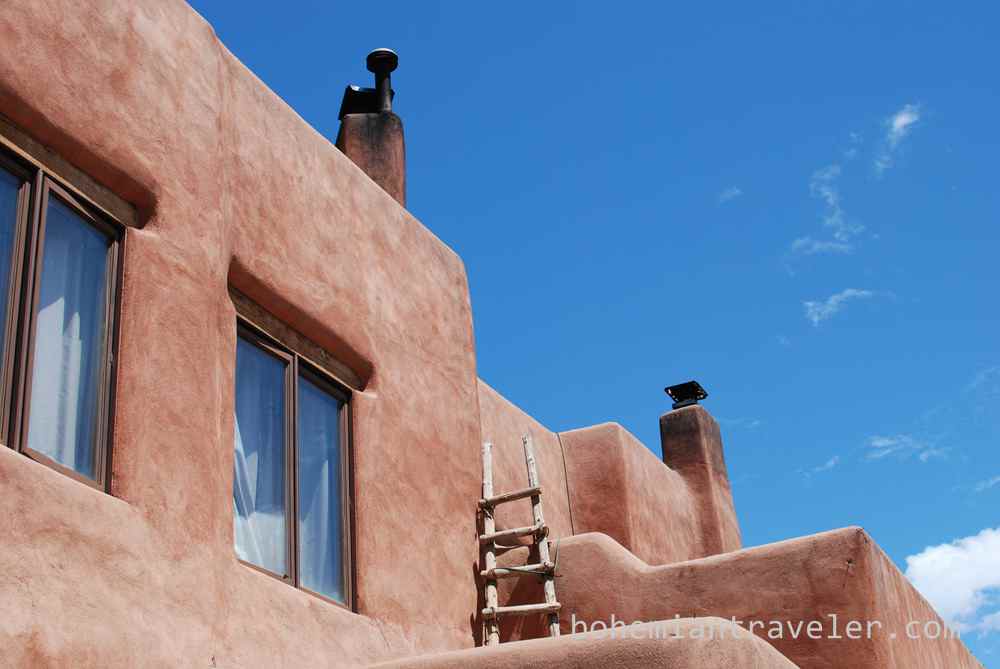 History and Superlatives of Santa Fe

We somehow brought the July monsoon with us from the north. It rained in Taos and continued in Santa Fe. There they were grateful for it.

Santa Fe sits at 7,199 ft. (2,194 m.), making it the highest capital in the United States. It’s also the oldest capital in the country—founded in 1607 as the governmental seat of a then territory of Nueva España (New Spain). Santa Fe has only been part of the U.S. since 1848, when New Mexico was annexed.

Santa Fe is best known for its history and its arts scene. It’s the third biggest art market in the country after New York and LA—that’s pretty remarkable considering it’s a town of about 68,000 people.

My day in Santa Fe was made possible by the Santa Fe Travelers, a couple Juno and I connected with online just days before. Without their hospitality, we probably would have just blown through town, experiencing 10% of what we had.

We were lucky enough to catch the press-only opening of the new exhibit at Site Santa Fe. It’s a contemporary art museum and I don’t want to categorize it any more because of the wide variety of installments that go in there. They describe themselves as a “dynamic platform for the production and presentation of artistic and curatorial innovation.”

We got a preview of MO RE AL—or More Real?—the Stephen Colbert-inspired themed work dealing with “Truthiness” in the modern era.

On the way out of the first installment (which I saw last) I remember leaving saying, “I don’t know what’s real anymore.”

I think I proved their point just then. Inside you witness “fabrications of fabrications” like the weapons of mass destruction in addition to totally manufactured life stories in a variety of media.

In one of my favorite installments we are previewed to a video of the subjects in Velázquez’s Las Meninas, history’s most analyzed painting.

More Real? Art in the Age of Truthiness runs through January 6th, 2013 at Site Santa Fe. For more info: http://www.sitesantafe.org/ Santa Fe is loaded with history, but the first thing you’ll notice is the architecture. Much of the old town is done up in either pueblo style with real adobe or the Pueblo Revival Style architecture. The Palace of the Governors is the most prominent building—the oldest continuously occupied public building in the United States. It dates from 1610.

Nearby, the Spanish colonial mission church San Miguel is said to be the oldest church in the United States built between approximately 1610 and 1626. It stands beside De Vargas Street House—thought to be the oldest house in the country.

We walked past 109 East Palace

. This is the address where recruited scientists of the Manhattan Project first reported to when they arrive in Santa Fe. They had little idea as to the exact reason for their enlistment, but most followed instructions and lived as virtual prisoners of the U.S. Government for the following couple years in nearby Los Alamos. Billie and Steve drove us up Canyon Road—Santa Fe’s half-mile strip of over 80 art galleries—telling us how it used to be in the past (farmland and a muddy gully). They pointed out the Acequia Madre (“Mother Ditch”), the mini-canal running one block to the south that used to irrigate the fields. Today Canyon Road is especially buzzing on Friday evening when most galleries have an open house.

We passed million dollar homes hidden behind adobe walls near one home which still produces fire wood—same as the old days except instead of delivering by donkey, they throw the wood in the back of a pickup. It may be an urban legend, but it’s thought the donkey used to go down into town themselves and people would just take wood as needed and leave the money in a satchel. Chef David explained to us a little about New Mexican cuisine. He isn’t originally from the southwest, but he’s embraced the chile and its numerous uses in the regional dishes. His menu at Blue Corn is creative, delicious and fun. I’m not usually a hot dog ordering guy, but he makes them homemade from 100% beef and accompanies them with homemade chips.

If you’re not from New Mexico, try the stuffed sopaipillas. But really, everything he brought out to us was fantastic. He’s got such a passion for food and I respect anyone who is that enthusiastic about his life’s work. The in-house brewed beers, from the Atomic Blonde to the Road Runner IPA, stand up to (and pair well with) any of the dishes.

Don’t be turned off by Blue Corn’s Brewery location (the Café is downtown). If you’ve got wheels, head out to Southside to enjoy the local specialties and the fantastic beer. We stayed at the Santa Fe Sage Inn—which is a great value. It’s not a chain and the location is just a few minutes walk from downtown (or take their free shuttle). Free WiFi, breakfast, and pool too. Rooms go for around $100 per night. More info: http://santafesageinn.com/index.html The next morning we visited the New Mexico State Capitol Building—which is pretty much a free Art Museum. This symbolizes what art means to this state. Art and artists are everywhere—and they have been for centuries. The capitol’s four stories are filled with New Mexico-only artists.

The last time I visited Santa Fe I was eight, and the State House was at the top of my sightseeing list. I knew it was only one of ten state capitol buildings without an external dome. It was refurbished in the 90’s and you shouldn’t leave Santa Fe without at least a quick run through.

Another fun fact—from above you can see the building is formed in the shape of the zia sun symbol—used on the state flag. Have you been to Santa Fe? What did you think?