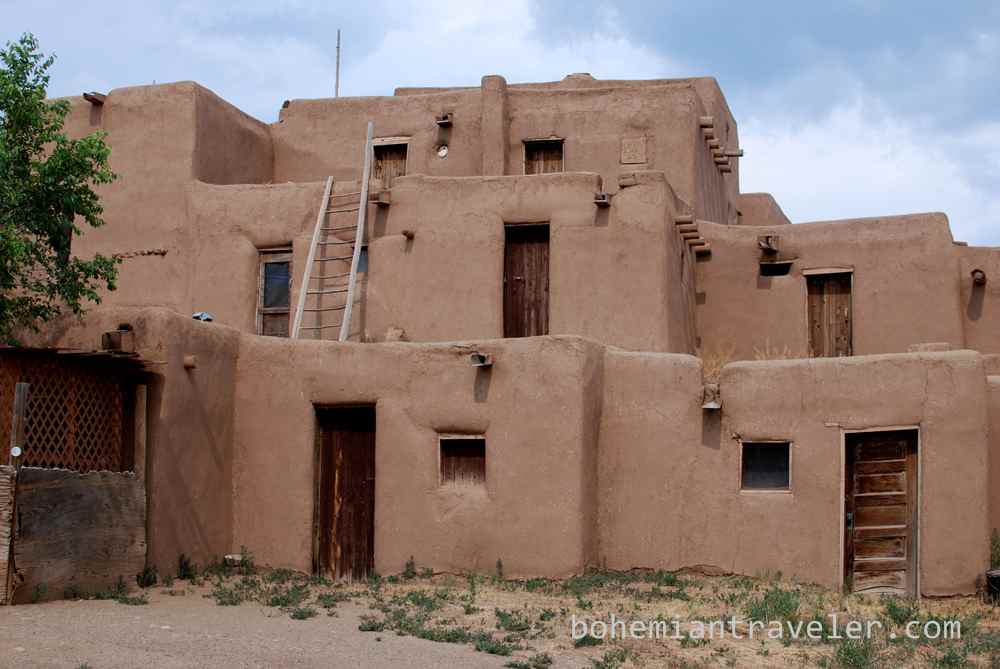 We left Great Sand Dunes after an early morning climbing to the top of these tallest dunes in North America. By 11am I saw the gigantic dunes shrinking in my rear-view mirror as Blanca Peak neared on my left. On the southern edge of the Sangre de Cristo range, Blanca shoots right up out of the valley to 14,345 ft. (4,372 m).

The Welcome to New Mexico sign is big, yellow and tells us that the state is The Land of Enchantment. It has a red and green chile pepper on it. This is the question you get asked when ordering New Mexican food: Do you want red, green, or one of each chile?

At Questa we made a diversion to the Enchanted Circle—a scenic route looping north of Taos. It was the Fourth of July and families were out in Red River and already assembling on the roadside for a parade in Eagle Nest. The loop is a scenic byway and there is some great camping along the way. Our goal was to get to Taos and its pueblo, so we didn’t linger on the Enchanted Circle very long.

Taos is an artsy town up in the high elevation nearby some great skiing. Although I wanted to check the town out, we were really coming for the pueblo.

At 1,000 years old, Taos Pueblo is said to be one of the oldest continuously inhabited villages in North America. Their two multi-story residential towers are centuries-old and still inhabited. Although electricity, running water, and indoor plumbing are prohibited; doors, propane stoves and modern windows were installed during the last century.

Previously the Pueblo Indians entered their houses through the roof after climbing up wooden ladders. They pulled up their ladder each night and slept in peace. 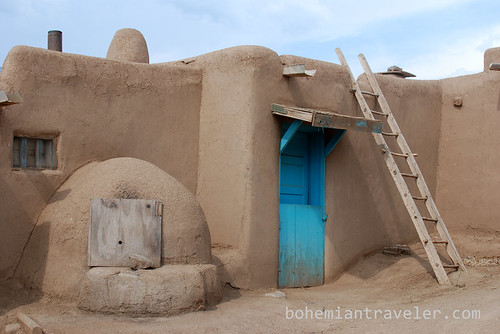 A house in the Taos Pueblo

The Pueblo Indians at Taos are thought to be some of the most secretive and conservative. Resentment towards the Spanish and US government were prevalent from both our tour guide as well as the artist we talked to—and with good reason. Their history is littered with religious persecution, stolen lands, battles for resources, as well as broken promises.

The Pueblo closes to visitors at 4:30pm and for the rest of the afternoon we dodged thunderstorms in between grabbing dinner and walking around historic downtown Taos.

For sleeping, we went back up 64 toward Eagle Nest. Just outside of town, the Carson National Forest begins and there are a few fee-area established campsites. Just past those we found La Sombra campground which was overgrown because of a closed road. There was a place to park and it was a no fee area. Free camping—mission accomplished for the night. 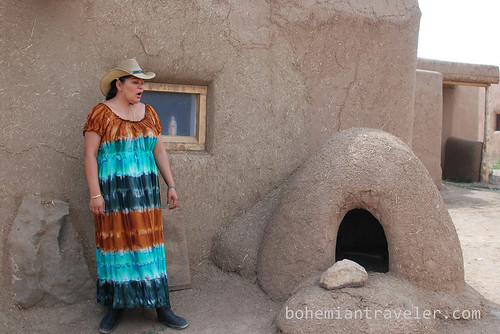 Our tour guide at Taos Pueblo next to an oven

Thanks to Juno Kim for photography help at Taos Pueblo.