Getting my Palm Read in China 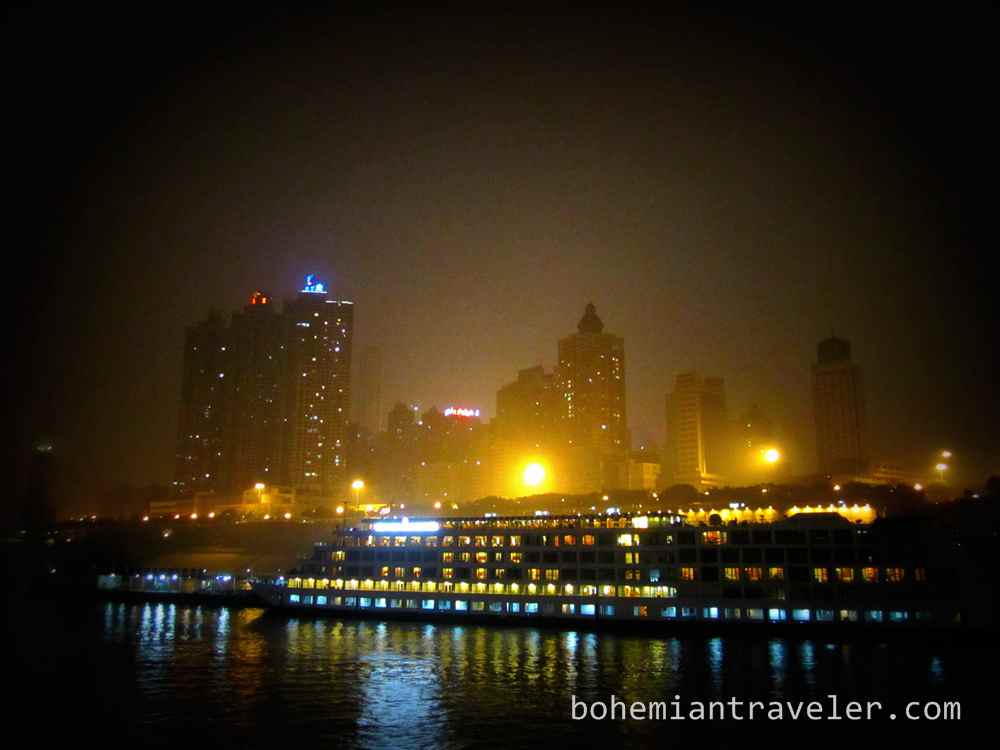 A view of Chongqing from the Yangtze.

Our ship pulled out of Chongqing the night before at 22:00—slowly leaving the bright lights of this megacity at the confluence of two great rivers. We had explored Chongqing by foot, up and down its steep topography, for a few hours during the day. If you can see through the smog and fog, Chongqing is a rapidly modernizing and fast growing city. By far the most interesting neighborhood we saw was when we wandered down Eighteen Steps Lane. Here a thriving village is tucked under newly built skyscrapers.

Chongqing juts out between the Yangtze and Jialing Rivers in a fashion that reminds me of Manhattan sticking out between the East and Hudson Rivers. The light display on the buildings gave an air of Hong Kong as we gently drifted downstream. During the night we would sail past the hilly farmland in between Changshou and Fuling, arriving at Fengdu during breakfast the next morning. As an optional tours, some passengers disembarked for the Fengdu Ghost City tour—a bunch of ghost-focused temples. But as the rain poured down we were happy to stay aboard and participate in a free acupuncture and Chinese medicine demonstration. We learned about the benefits of acupuncture, cupping, the meridians of the body, and how to apply pressure to points of the body to ease motion sickness, cough, uneasy sleep, and regulate blood pressure.

We battled heavy fog the whole afternoon trudging eastward. Our excursion to Shibaozhai was delayed until the early evening. As we stepped off the ship, porters aggressively pursued our business. Considering that we had been stuck on board a boat all day, none of us passenger wished to be carried, and instead welcomed the 15-minute walk to the pagoda, now on an island. It was explained to us how the water level has risen since the dam was built and that much of the town was rebuilt further up the river bank. The tour guide proudly showed where the water level reaches its highest point in December and January and how the embankments, built by the government, protect the cultural landmark.

Shibaozhai is a 220-meter outcrop with a twelve-story red pagoda grafted onto its side. Lanruo Dian was built in 1819 below a temple dating to 1750. We walked through the inside of the wooden pagoda, up all the steps, hugging the cliff face. Like many temples, it was built without using nails. Back on the ship

At nightfall we boarded and sailed through the darkness. During the evening a welcome reception was held in the ballroom. In the morning we woke docked next to four other cruise ships at Baidi Cheng. Disclosure: This Yangtze River Cruise is in partnership with ChinaTours.com . The opinions expressed are entirely my own.