Photo from the Road: Macau’s Portuguese Past 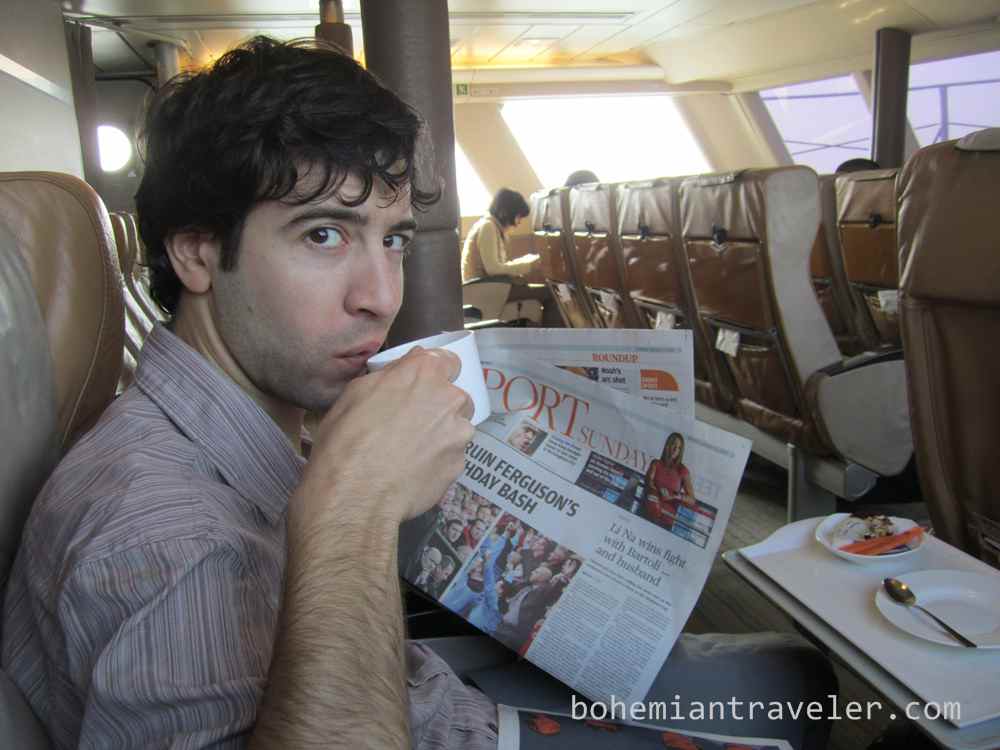 A week prior, we had checked the Chinese calendar for an auspicious date to travel. The first of January looked good. We had already been in Hong Kong for about two weeks and were anxious to move on. We set a plan. Watch the fireworks from between high-rises halfway up the Peak on New Year’s Eve, and escape the city’s madding seven million the next morning.

Juno had arranged ahead of time for some tickets to be set aside for us on TurboJET. What we didn’t expect was two seats in premier grand class. As the ferry chugged its way out of Hong Kong Harbour, a South China Morning Post landed on my lap followed by breakfast on a tray. After finishing my meal, I said yes please to the well-dressed man taking care of us, and a few minutes later my coffee came out accompanied by a fine chocolate. Sailing time was an hour and for once I wish it would have lasted much longer.

Macau was more crowded than we could have expected. Masses lined up in multiple queues at passport control. It was an hour before we got through, myself with a stamp allowing 30 days in Macau and Juno, a South Korean passport holder, was granted 90 days. This time around, I wished time had passed more quickly.

The crowds of New Year’s Day filled the sidewalk and made walking with our backpacks more difficult. We had already exchanged some of our leftover Hong Kong Dollars into Macau’s currency, the pataca. This wasn’t entirely necessary. The Macanese accept the Hong Kong dollar which is of fractionally higher value.

Now we’d have to find accommodation. Because it was a holiday, I first tried finding a couchsurfing host, and second, by booking a room by web and telephone, but none paned out. We check about five accommodations in person and all were either over our budget, or fully booked. The first which actually had vacancy and was a suitable price had the air of a brothel, and an unclean one at that. I wouldn’t have stayed there if it was half the price.

I was about to call it quits and dart for the border of China, when Augusters Guesthouse said they didn’t have a room, but opened the doors and let us in. That was a positive sign. For 60 patacas ($7.70 US) the helpful Filipino innkeeper said she would set up the fold-out cots in the lobby. There was already a German guy doing the same, and we got the last two beds. She would sleep on the floor. It wasn’t much space but it was clean and friendly.

But before sleeping we hit the streets for the last couple of hours of day light. Through the pedestrian-only streets crowded with New Year’s Day tourists, we stopped at the almost-life-size nativity set in the square outside of the cathedral.

We continued to the St. Lazarus District built up with handsome colonial buildings and stumbled upon the gorgeous courtyard of Albergue Santa Casa da Misericordia. Once a home for the elderly, it now houses a restaurant/cafe, art gallery, Portuguese specialty souvenir shop and a fashion design workshop.

Two blocks following would be the “most uncomfortable coffee break ever” as Juno described it. We sat down and ordered two coffees and a Portuguese sausage roll and forgot that we didn’t have enough patacas to cover our bill. I had some additional leftover Hong Kong dollars, but even with these added we would still be shy of covering the bill. I went to the kitchen and cancelled the sandwich. Five minutes later it came out. Now we had to recruit one of the other patrons to explain our situation in Cantonese. I had US dollars and credit cards, but those were not useful in this cute little sandwich café. Finally our translator neighbor finished explaining and we said we were sorry—lack of sleep, too much of a journey for one day, just forgot we didn’t have enough local cash before ordering.