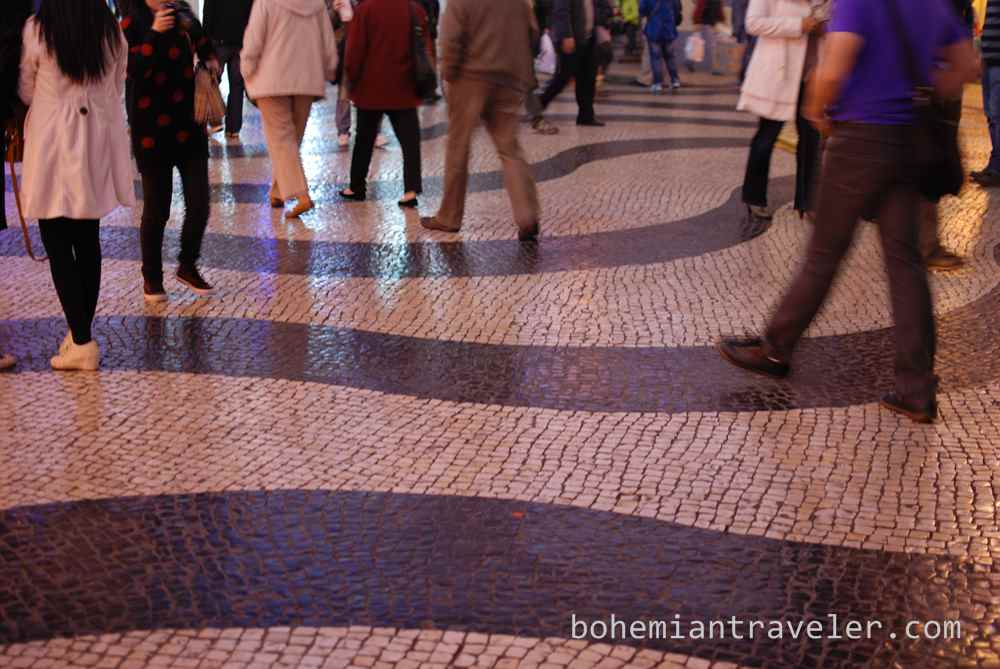 After two days of walking around Macau, we decided we’d had enough of our makeshift dorm room accommodation in Augusters Guesthouse. Even though there wasn’t too much more to see, we could have lingered longer in the city if our sleeping situation was more comfortable. We were enjoying Macau—a very different place than Hong Kong.

1)  To start, it’s small. You can walk around most of the northern peninsula of Macau in a couple days. We passed a greyhound track on the way to Lin Fong Temple, zipped through Red Market before strolling through the Chinese gardens of Lou Lim Leoc. Add to this Catholic churches from days of the Portuguese as well as old cobbled streets. And over on the east side of town is casino row.

2)  It’s noisy. More motorbikes and scooters here compared to Hong Kong. Horns beeping. Enough said. Although there are less people (540,000), they are more densely concentrated in Macau. In fact, Macau is the most densely populated territory in the world. Plus, everyone is above ground because there’s no underground metro.

3)  Macau’s much older than Hong Kong. Its history dates back to 1557 when the Portuguese persuaded Chinese officials to rent them a strategically well-placed peninsula at the mouth of the Pearl River. Until the beginning of the 17th century, the Portuguese were the sole agents for merchants across all of east Asia. However it more or less became a backwater when the British seized Hong Kong in 1841 and gained control of virtually all trade. Gambling was introduced in 1847 as a way of earning some kind of income.

4) Macau’s architecture is more interesting than Hong Kong’s. True, skyscraper architecture is of great -interest in Hong Kong, but that’s not what I’m talking about. Macau’s centuries-old Portuguese churches and civic building are what shine here. Read my post on Macau’s Portuguese Past.

5) Lots of tourists, about 25 million per year, in fact. But they’re primarily in two areas exclusively: the historic downtown and at the casinos. As soon as we wandered outside of the historic core, prices dropped and we only saw locals. Although, New Year’s is not a huge holiday here, it seemed to be especially busy—the center was chock-full of visitors. Accommodation was also tough to find. Most visitors must be from Hong Kong and China.

6) Food is excellent. Mix Cantonese and Portuguese influences and you’re going to get a delicious hybrid. I usually stick to street food and cheap local eateries, but one night in Macau I splurged. A restaurant was the only place I could find proper Macanese cuisine, as opposed to just the standard Cantonese food. Portuguese chicken, African chicken, curry crabs, are all favorites. And for breakfast try a custard tart with a proper coffee, very easily found.

7) The money is unique. Did you know the currency of Macau is the pataca? Neither did I? The name is Portuguese initially coming from how the Portuguese referred to the Mexican dollar as the ‘Pataca Mexicana’. I collected a bunch of coins, speculating that the currency might not be around the next time I return. But actually, the pataca will be around longer than I expected. As part of the agreement “one country, two systems” with China, Macau must keep its currency as well as its legal system, police force, and customs and immigration intact until 2049.

Check out my Flickr set for more photos from Macau