My First Day in Bangkok (and where to get travel shots)

On the morning of the first day of Songkran I expected to be woken up by firecrackers. Supposedly it chases off the bad luck of the previous year. I was staying in the beach town of Karon on the island of Phuket, Thailand. I had to be up early to get a boat to Ko Phi Phi—a gorgeous island along the Andaman coast that was most famously used in the filming The Beach with Leonardo DiCaprio.

A celebration of Songkran, the Thai New Year (or Water Festival) on the boat to Ko Phi Phi.

Songkran is the Thai New Year celebration. It is more well known as the water festival. During this time anyone and everyone in the streets is drenched with water—tourists are no exception. The day before people were arming themselves with huge squirt guns.

At 7am our van got splashed as we drove to the ferry port. Revelers set up shop, so to speak, on the side of the road next to huge tubs of water. They held smaller buckets and squirt guns and drenched anyone that went by. 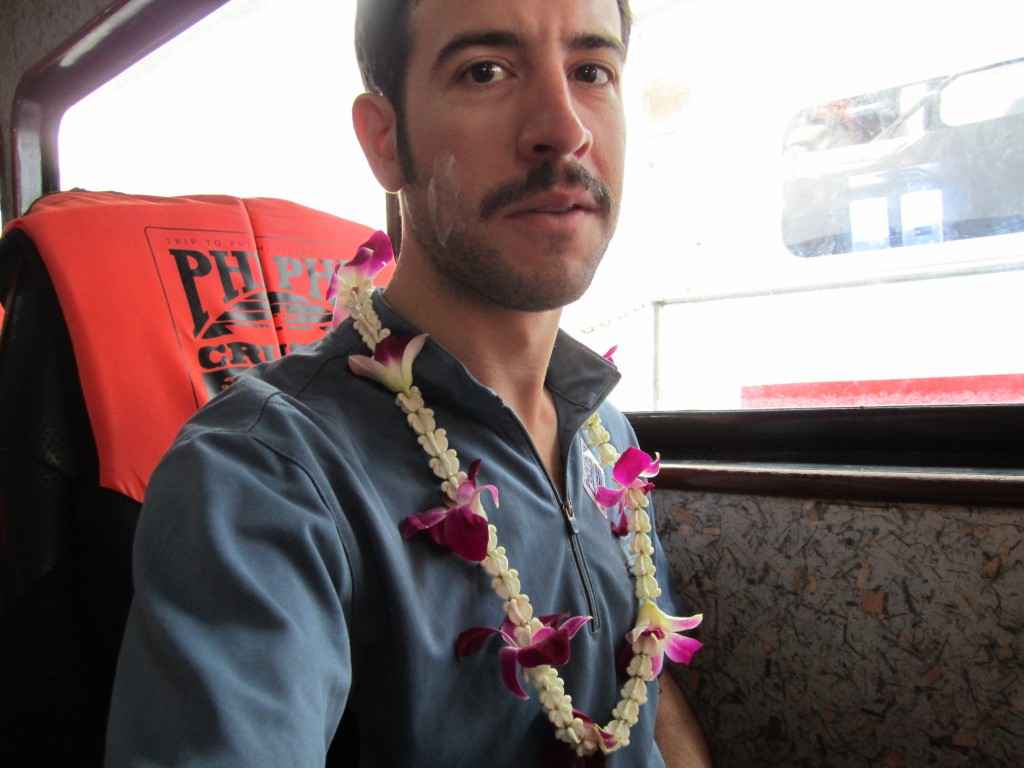 Here I'm pictured with my Songkran necklace of orchids on the boat to Ko Phi Phi.

The history of the Songkran celebrates and respects water. Originally set in November, the holiday shifted to April when the Thais migrated to their present location and ensuing tropical climate centuries ago. April is the month of rice sowing here and the Thais have a strong agricultural identity. The water pouring, dousing, and fighting is an extension of the important bathing ceremonies that are at the heart of the Songkran rituals.

The biggest celebrations, I’m told, are held in Chaing Mai and Phuket. But on Phi Phi there was a healthy dose of locals and foreigners along every narrow street, armed with over-sized water guns, buckets of ice water and hoses at the ready—usually with a beer Chang in the other hand. It was impossible to walk anywhere without getting completely drenched. “Put everything in plastic.” I was warned the previous day. 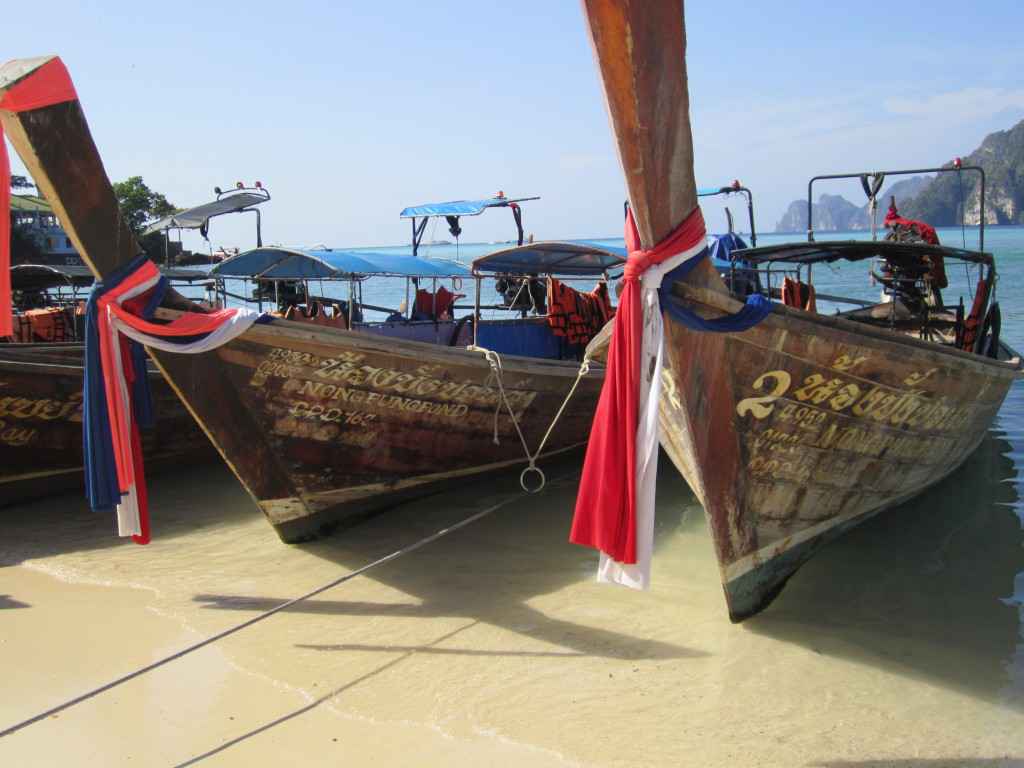 As I boarded the boat earlier that morning each of the other passengers and I got a necklace of orchids and talcum powder smeared on our cheeks. I smiled feeling a bit of acceptance from the Thais even though we were just tourists getting on a cruise boat that we paid for.

On the boat the band played and the staff danced. They played recorded music but had two live drummers on the back of the boat. A little while later a squirt gun fight broke out. By 10:30am we had docked on Phi Phi Island.

I felt very awkward on Ko Phi Phi. The atmosphere was a spring break clientele mixed with the Thai holiday. I’m a long-term traveler on a tight budget and everyone else seemed to be something very different—partying college students, romantic couples, or higher budget vacationers. Prices are inflated on Phi Phi—to double and sometimes triple the Thai average. That was frustrating as well. 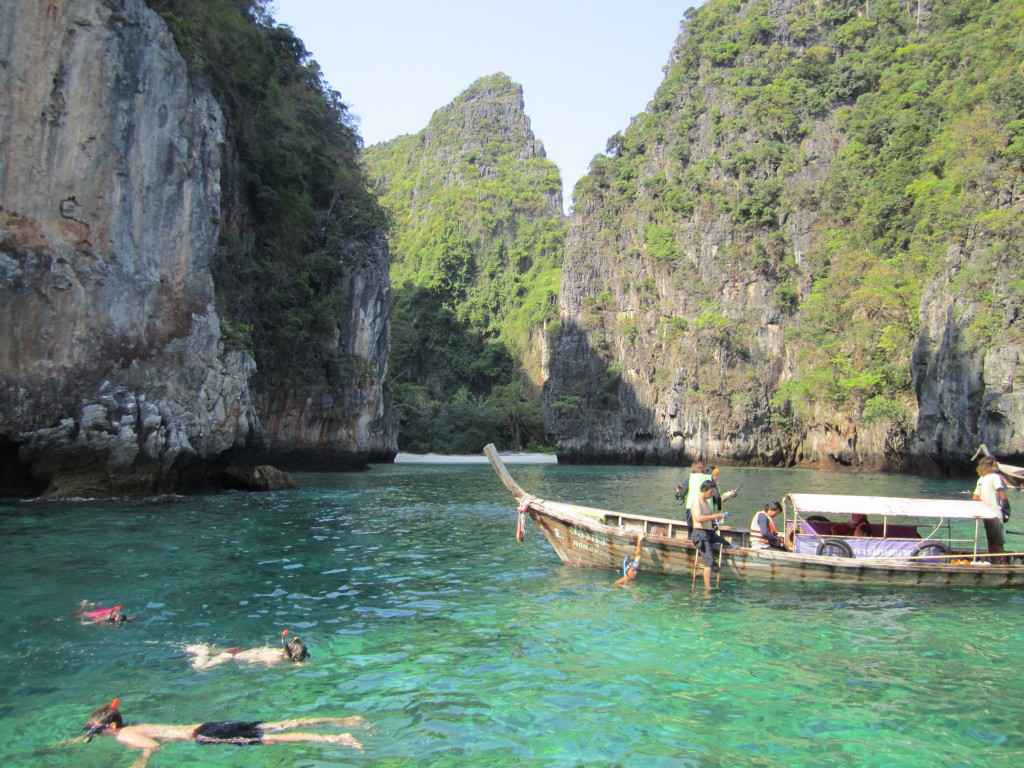 But I don’t regret stopping briefly. The Phi Phi islands are epically gorgeous. Ko Phi Phi Le (the smaller Phi Phi Island) is where they shot The Beach. The island consists of trees clinging to limestone cliffs and shallow bays of green water and white sand beaches.

For $8 I booked a tour on a little long-tail boat which took seven others and I to different points circling Ko Phi Phi Le which is situated only a few kilometers from our bigger Ko Phi Phi Don, the only one with accommodation. When I bought my ticket, the woman who sold it to me poured a little water from a bottle into a tiny bowl and dumped it over my shoulder as she told me her wishes.

During our tour we stopped at Monkey Beach, a shallow bay where we swam below towering limestone cliffs, another bay where we snorkeled, and finally Maya Bay where we enjoyed the beach and more swimming. 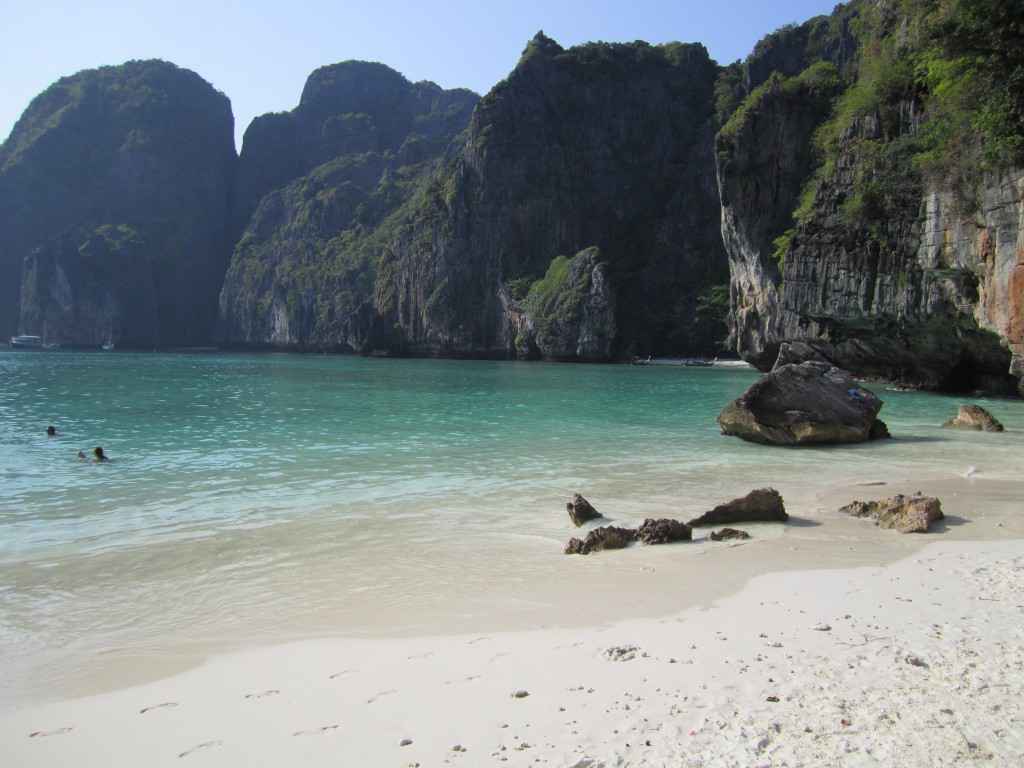 Back on Ko Phi Phi Don I stayed at quite possibly the messiest 16-bed dorm room ever, and paid double the average price. The place was party central. There were people’s clothes scattered everywhere, very little space for anything else. Permanent marker proclaiming sexual conquests covered the walls.

Luckily I was tired from the day of snorkeling and swimming so that I fell asleep despite the loud music and conversations right outside the open door. The next morning I was rested enough to take the early boat to Krabi—back to the mainland.