This morning I walked into Malaysia. It is a welcome change from Thailand. I thought I loved Thai food, but whoa, Malaysia is a food-lovers paradise. After I few more weeks I’ll be able to tell you if it’s my favorite food country in the world or not. The availability of Chinese, Malay and Indian cuisine makes this place hard to beat. 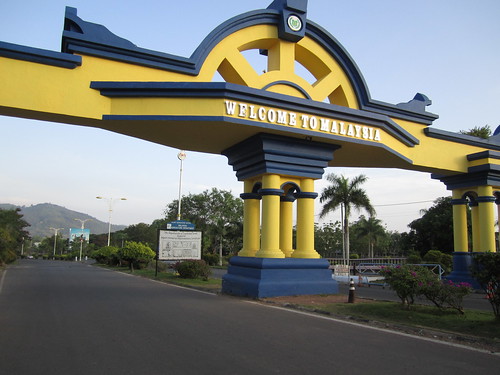 I met a young Russian couple at the bus station in Krabi, Thailand. They were traveling independently—a way most Russians would never dream of. Ninety-nine percent of Russians in Thailand have flown directly to Phuket for their ten days in the sun, swam in the warm clear water and will fly right home again when their holiday ends. But these two are holed up in Ton Sai Beach rock climbing for a few weeks, pausing their year-long trip around all of southeast Asia.

After our bus terminated in Hat Yai, we had a long struggle with shifty travel agents and dishonest taxi drivers trying to find public transport to the border. An excruciatingly long 55 km and 42 baht later, we wound up in Padang Besa—a seedy place, but considerably less so than most border towns I’ve crossed through. We stayed on a side street with two karaoke bars that had bad music and prostitutes flowing out of each. My hotel room was a real beauty—florescent light, a sink without a drain pipe, and a cockroach the size of a mouse. But for $7, I couldn’t complain—the sheets were clean.

At this point, Thailand had been frustrating me from over-zealous tour promoters and lack of information for do-it-yourself travelers, so I wasn’t happy to be spending another night in Thailand. The border was closed and we had been told it would be open until 11pm. So the three of us made the most of our time in Padang Besa and enjoyed some Songkran (Thai New Year) festivities before sitting down for some spicy seafood stir fry at a sidewalk stall.

“You can usually tell the quality of food by the personality of the person who cooks it.” The Russians told me.  It’s a good rule to go by. It may sound superficial, but if you use your intuition, you can usually pick out a good place to eat. And we did. The woman who cooked for us was as happy and grateful to have us eat her food as we were to eat it. During the meal, Volodya gave my Russian comprehension a good workout, telling me stories of his hitchhiking adventures across Siberia and beyond. 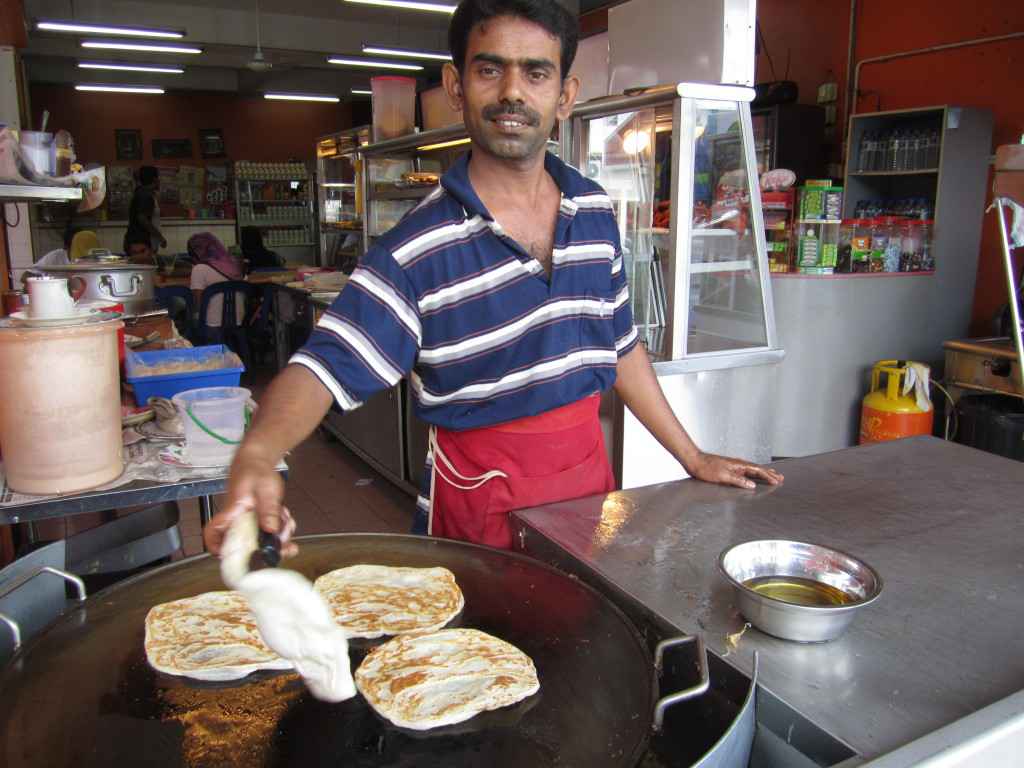 The Roti man in Kangar, Malaysia, near the Thai border.

At 6am the next morning, we walked 2 km to the border, got our stamps and I parted ways with Volodya and Olga. They were simply making a border run—leaving Thailand only to re-enter and get a visa worth two more weeks in the land of smiles.

I continued my journey south on two more buses, passing rubber plantations and rice fields and lots of people on motorbikes. The roads so far are more scenic here—without the shoddy storefronts that seem to line every road throughout Thailand. Later that afternoon I arrived in Butterworth—the city across the straights from Penang and got situated for my overnight train ride before taking the cross-channel ferry into Penang.