As my South Korea Moon Handbook points out, Halla-San, or Halla Mountain, is the island of Jeju-do. It is South Korea’s highest peak and rises tall out of the center of the island off the south coast of the country.

I had almost lost hope of summiting Halla-san, but my couchsurfing host had another guest staying with him when I arrived. Sam from Hong Kong, like so many other East Asians, was intent on climbing it before he left Jeju. So I said I would gladly join him. 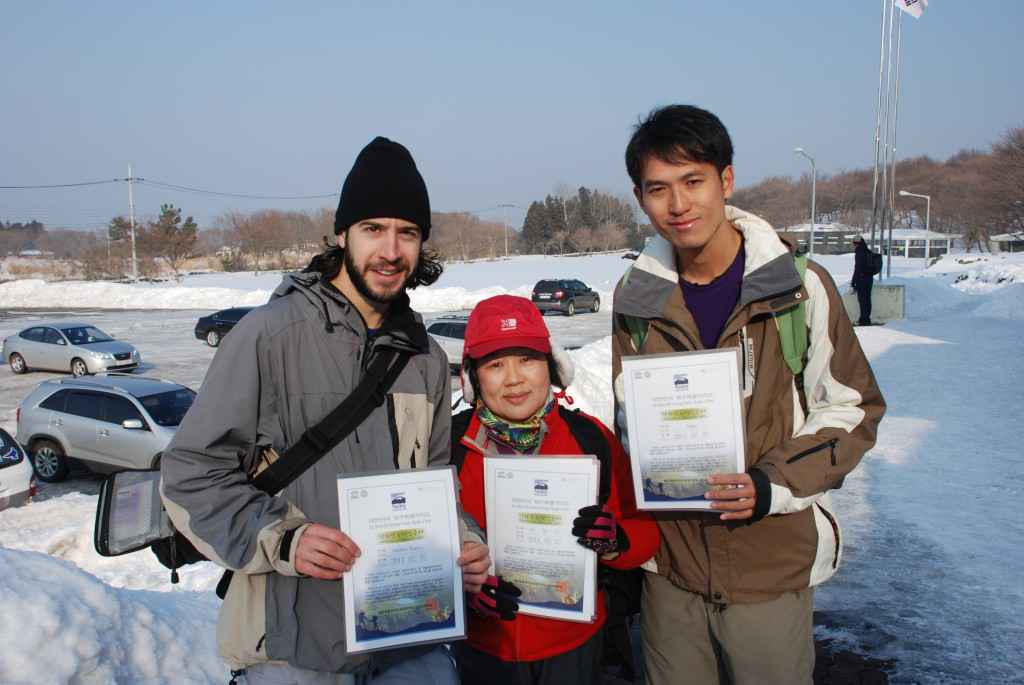 Sam and I with our new Korean friend who got these certificates made for us.

We set out early. The bus wound its way south, up the East Cross-island Highway to the trailhead at Seongpanak rest area. In order to have any chance of summiting, you must start hiking from this point before 9:30am. We stepped off the bus at about 9:10 and started on our way. This trail is known as the Seongpanak Course and lies east-west stretching 9.6 kilometers to the top.

The snow-packed trail was crowded with hikers of all ages, decked out in full hiking gear. The Koreans are probably the best dressed hikers out there. The heavy hiker traffic probably had something to do with it being the first day of the Lunar New Year holiday. But despite the holiday, Halla-san is extremely popular, probably due to it being the highest peak in a country and being a volcano on a very touristy island located in a country of avid hikers. 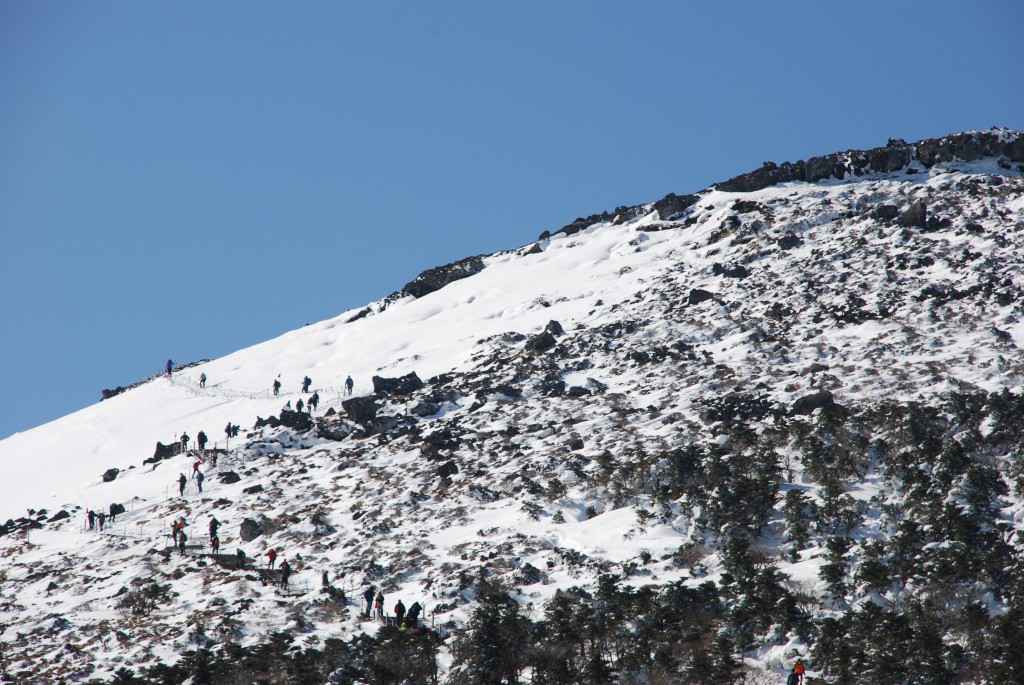 Hikers climb the last stretch to the summit of Halla-san

The first section of trail led us very gradually uphill through a young forest with snow covered branches and afforded no views. It was 11:00 by the time I reached the second rest hut. Here I got a bowl of instant noodles like all the other hikers and set off before the required time of noon. It’s about five hours down off the summit, so they insist everyone starts their way down before 1:30pm.

At the top I got reacquainted with Sam who hiked at a little faster pace and detoured to see a crater about halfway up. The summit, at 1,950 meters (6,397 ft.) was crowded with hikers taking pictures and peering into the crater which last erupted in 1007, and is thought to be extinct today. The frozen lake in the bottom of the crater is South Korea’s only natural lake.

We descended off the north slope, on a much steeper trail called the Gwaneum-sa course. Most of the way down we slid on the packed snow because we lacked the simple crampons that nearly everyone else had strapped on to their boots for added traction. As we crossed the one and only bridge one Korean hiker gave us chocolate bars, noticing that we are foreigners. Even though Sam is from Hong Kong, Koreans claim they can tell the difference between Chinese and Japanese, and other Asians. 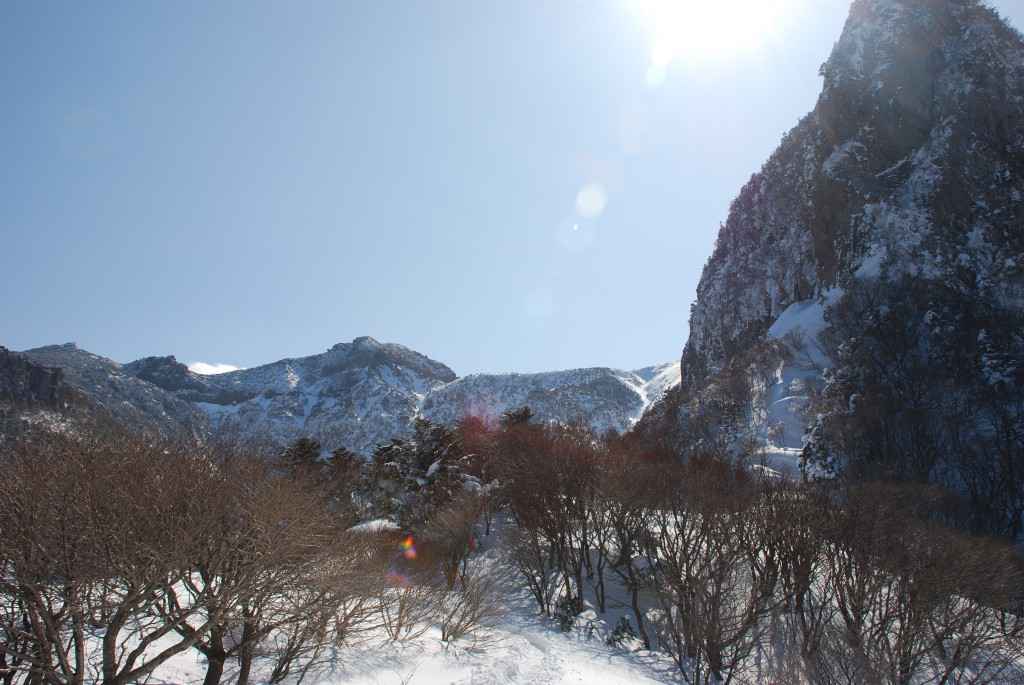 A view looking up at the north side of Halla-san

Near the bottom, the path evened out and we walked through a snow-covered deciduous forest which eventually led out to the road. At the Gwaneum-sa trailhead there is no public transportation, so a woman who had given us red ginseng taffy while we were hiking asked us if we wanted to share a taxi with her back to the city. We agreed. But first she wanted to get her official certification for successfully climbing Mt. Halla. And then she paid for our certificates too. So then it was official—Stephen Bugno successfully climbed Halla-san on February 2nd 2011. 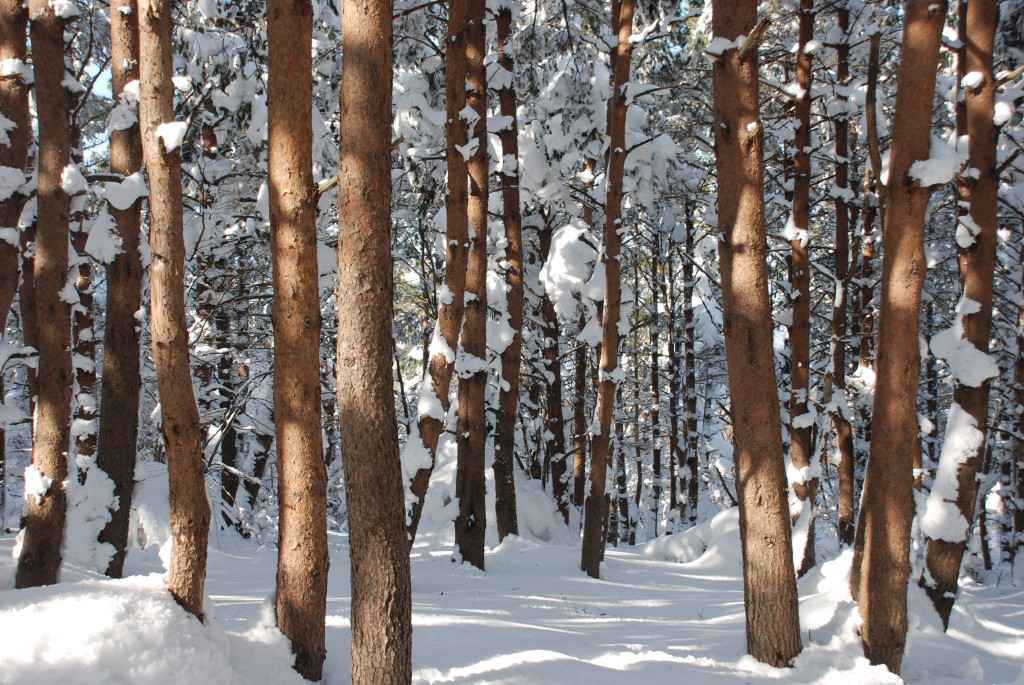 Snow covered tree on the north side of Halla-san in Jeju, South Korea

Back in Jeju City we filled up with sundae, a Korean dish I tried for the first time. It is sausage made of pig intestine, with stuffing of rice, noodle, onion cooked in soup. Also in the soup were other cuts of meat I did not recognize. Served in a steaming flavorful broth in a big clay bowl, it both nourished and warmed us back to life.