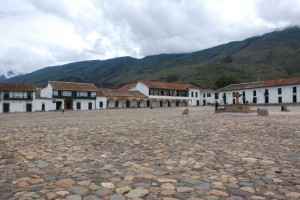 My love of Colombian colonial towns continues. After Barichara and Guane, I took the bus to Villa de Leiva (also spelled Leyva). Villa de Leiva is beautiful and there aren’t many who would contest this fact. Fifty km through the mountains west of Tunja, it sits in a valley at 2,144 m surrounded by an area rich in natural splendor, with petroglyphs, caverns, ruins, waterfalls, lakes, and even a small semi-desert waiting to be explored.

Few towns have been as well-preserved as Villa de Leiva; it has been declared a National Monument to keep it from being modernized. It is a romantic place too: gorgeous architecture, quiet restaurants inside courtyards, boutique hotels and cafes, artisan vendor’s shops, and probably the best French bakery in all of Colombia. 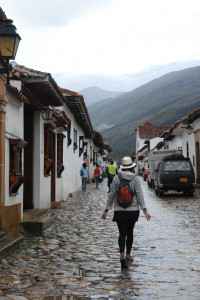 Villa de Leiva dates back to the early days of Spanish rule when it was founded in 1572. Its huge, buckling, 14,000 sq m central plaza is said to be the largest in all of South America. The large white-washed houses with their green shutters, flower-filled window boxes, and terracotta-tiled roofs are kept in immaculate condition. And the street’s cobblestones are so big, cars avoid driving on them.

What to do in Villa de Leiva

There is plenty to do around Villa de Leiva. Fellow travelers at Colombian Highlands Hostel were riding horses  into the mini desert west of town, rappelling down waterfalls, renting bikes, taking night hikes or trips into the cloud forest of Iguaque National Park. Or just sitting around in the hammocks enjoying the view out to the countryside.

My first day I chose to just relax and walk around the town soaking up the atmosphere, ducking into coffee shops to stay dry, chatting with a fellow traveler from Montreal. On my second afternoon I took the hour walk out to El Fosil, a museum built around the 120 million-year-old skeleton of a small Kronosaurus found in the spot in 1977. I left the next morning, but could have easily spent a few more days here.