Photo from the Road: Breakfast at the Market 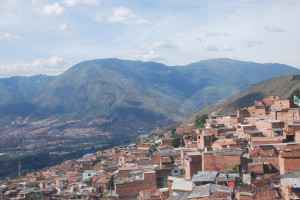 view from the top station of Metro Cable

I have come to Colombia for two reasons. Noel, a good friend of mine lives in Medellin and after lingering for almost a year here, was encouraging me to visit before he left. The second is the fact that every person I meet that has been to Colombia absolutely raves about it in a good way.

Knowing someone that lives in a place is extremely helpful and often I plan my travel destinations around places that I have friends living. It is a great way to get acclimatized to my new destination. For the first couple days in Medellin, Noel showed me the best place to get a coffee and pastry, took me past the Botero statues, through many of the parks, in a couple cathedrals, to a jazz bar, pointed out which places to avoid, and oriented me onto Medellin’s new metro. 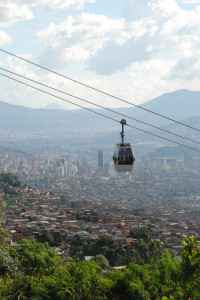 A view of the cable car over Medellin, Colombia

I don’t want to ignore Medellin’s history as the former capital of the world’s cocaine trade and one of the most violent places the earth has even seen. In 1991, this city saw 6,349 homicides (that’s more than Juarez, Mexico’s (the new Colombia) 2009 tally of 2,600.) By 2005, Medellin had its lowest homicide in rate in over 20 years and showed one of the best improvements of any city in the world. There are still neighborhoods you want to avoid, but overall the city is now livable and expats are moving here. The city is in the midst of a building boom and the city’s 2.4 million residents have much to be proud of.

One of the symbols of the city’s renaissance is its cable car. Built as the world’s first cable car the serves primarily as public transportation, it has grown into a minor tourist attraction as well. Noel took me up to metro station Santo Domingo at the top of Metrocable’s Line K.

During the 1980’s and 90’s this neighborhood was one of the most notorious in all a Latin America, a shanty-town of brick houses built haphazardly on the hillside, which Pablo Escobar used as recruiting grounds for his army of assassins. 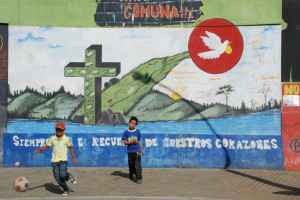 The city’s aim in building the cable car was to “de-ghettofy” the area from where it once took residents up to two hours to reach downtown. Now they’re carried quickly down in the 8-passenger cars to Line A  at Acevedo station where they transfer onto the clean, efficient, and safe metro train. They’ve also built a cultural center—a huge three-section black building that can be seen from the valley below, which contains a library, computers, and a space for social and artistic activities. The cable car/project for social change was such a success that they built a second cable car to La Aurora and a third one is in the works.