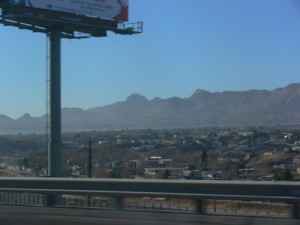 “It used to be a great place to party. Everybody would go over there from El Paso. Now El Paso is where everybody comes to party.”

I’m hanging out for the afternoon with a bunch of college students from Chihuahua, Mexico. They study at UTEP here in El Paso. Civil Engineering, graphic design, art history is what they’re studying.

We are sitting on the front porch of their house in the historic neighborhood of Sunset Heights. It sits adjacent to the university, just north of Interstate10, which lies just on this side of the fence from Juarez. It is late afternoon.

Juarez is the most dangerous city in the world, they tell me. They are laughing, but they know it’s a sad fact. It’s gone downhill fast in the last 5 years. 1,350 people were murdered there in 2008 and an additional 2,660 in 2009. Most of these are related to gang violence. The drug cartels are fighting one another for territory. But even if you are an innocent bystander or a tourist, there is always the chance you could get hit with a stray bullet.

“A week ago, one of UTEP’s buildings got hit with a bullet all the way from Juarez.” Javi tells me as we’re nursing our beer while sitting on the comfortable couch on the porch. Jose is busy fixing his bike. The rest of us are chatting, about five six in all.

Three of us get up and walk the couple blocks to the Circle K for another cold one. Right there beyond the freeway, across the high fence and the slow flowing Rio Grande is Anapra. Chuy points to it.

“That’s the most dangerous neighborhood of Juarez.” He declares.

Chuy had planned to take me over to his family’s apartment in Juarez, but when he went over to clean yesterday, it needed more work than he thought. It’s been sitting vacant for more than six months after his father left for Monterrey.

“And there was a huge rat living there.” He shows me with his hands as if he were bragging about a 12-inch trout he caught. “I beat it with a mop inside the cupboard.”

The previous evening my couch surfing host in Silver City, NM had recommended I not visit Juarez.

“I hate telling you this. I never thought I would say this, but please don’t go to Juarez. I absolutely love Mexico and have taken my children there on a few vacations and five years ago I wouldn’t have said this. But it’s just is not safe there right now.”

Mary wasn’t the only one to advise me to avoid Juarez. A friend in Tempe, AZ thought I was absolutely crazy for considering crossing the border in Juarez. “If you’re going to cross the border, do it in a small town border crossing.” He recommended.

At Circle K we grab a couple more quart-sized Carta Blancas. “This is what carpenters and factory workers drink in Mexico” It is the beer of the working class-and for $1.99 a piece, it’s not bad.

“It’s kind of sad.” Chuy recalls on the walk back. “Juarez is like a ghost town now.” Even as recent as two years ago, Juarez was a great party town. “Bars would charge like a dollar to get in and then beers were a peso each. That’s less than ten cents. The bars were just cover operations. Jim Morrison used to drink in Juarez.” He adds.

Chuy’s got friends from high school that are doing 20 years for small time drug running: marijuana and cocaine. “They thought it was safe and easy money.” About ten people per day get busted he estimates. And one friend, whom he found out about while he was traveling in Europe, got gunned down in Juarez. “He was always getting into trouble.”

Chuy’s even gotten held up by some gang members who wanted to steal his visa in order to sell it on the black market. He crossed the bridge into Juarez and a guy accused him of rapping his sister and then told him he had to walk with him to see the sister to make sure she’d negatively identify him.

“I wanted to leave right away but the guy said he could stab me right now if he wanted to. So I walked with them and showed them my student visa which isn’t any good to them.”

A normal visa to cross the border sells on the black market for $500. And if you are a Mexican with a visa in need of some quick cash, you could sell it for $200.

That night we’re at the house til 3am, and spend the rest of the night sleeping at Chuy’s place in El Paso. The next afternoon as I drive out of El Paso I take some quick glances at Juarez and the mountains surrounding town, and contemplate my avoidance of the most dangerous city in the world.