Photo from the Road: Shooting Pool in a Nevada Bar 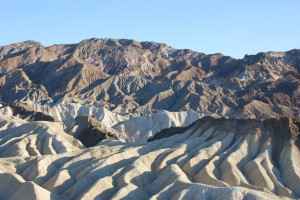 I don’t know why I thought it would be a good idea to visit Death Valley in the middle of the summer. It’s eight pm and we are shirtless in our campground preparing dinner. Gilbert is cooking up some garlic scrambled eggs for dinner. We are sweating. Our mouths constantly feel dry. When the hot breeze blows through, our eyes burn.  It’s still in the 110’s.

We left Vegas around noon, so delirious from lack of sleep and strung out on caffeine that we drove into a national forest and parked the car and fell asleep with the sun reflector in the windshield and the doors cracked for a cross breeze. We had imagined somewhere, a tree maybe, in order to park the car under to avoid the sun. But we didn’t see any trees in Red Rock Canyon NCA. 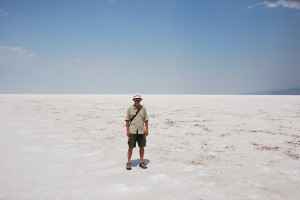 Stephen at the salt flats at Badwater Basin

After the nap, we were back on the highway, barreling through the desert at 70 mph. There are certain sections of roadways here that are daytime headlight zones. This was one of them. Long, straight, with lots of passing zones. We crossed into California at a remote area south of Amargosa Valley. But before that we had a Bud and played pool at a dingy border saloon and lost a few more dollars at the slots.

Then we dropped a few thousand feet into Death Valley. Situated between two mountain ranges, warm air sinks to the below-sea-level bottom of the valley and is unable to escape over the mountains.  This circulation of recycled hot air results in some of the hottest temperatures on earth.

The interpreter at the visitor’s center told us that temps would be in the 120’s this week with smoke from nearby wildfires filling the valley and trapping even more hot air than normal. This would also affect the visibility of the surrounding mountains. 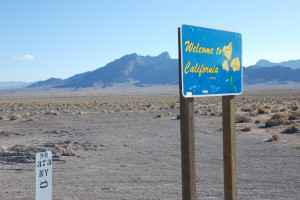 Welcome to California near Amargosa Valley

So why did we go through Death Valley on July 29? Part of it was just being on the way from Las Vegas to the east side of the Sierra Nevada. Part was that our family had missed this area on all previous family vacations to surrounding regions. Another is that I’m drawn to extreme climates, bizarre landscapes, and locations of record-breaking significance (I had already visited the Dead Sea a few years back).

Another reason was simply wanting to redefine my idea of heat. The first clue that we shouldn’t have been doing what we were about to do (camp in Death Valley in July) was the sign entering the campground that showed us it was cheaper now, only $12, in the May to October off season. There was no attendant on duty this time of year so I had to swipe my credit card to pay. The campground was vacant except for two other families. 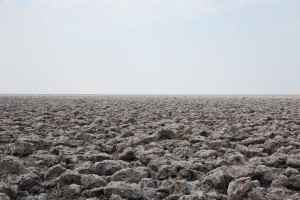 Throughout the evening, we threw water onto our bodies, only to evaporate within a couple minutes and barely create any cooling sensation. We turned on the taps in the bathrooms and out came scorching hot water. Gilbert spent the night sleeping on top of the picnic table and I sweated a bit more in the tent.

The next morning we descended even further into the Devil’s golf course and Badwater Basin, the lowest point in the United States. By noon we were ready for the drive up and out of Death Valley where the temperature were more reasonable.