Photo from the Road: Tostadas at the Coyoacan Mercado 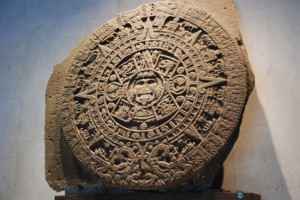 The Piedra del Sol in the Museo Nacional de Antropologia

Walking off the plane I meet Gonzalo. He has black hair slicked to the side, is dressed stylish and caries a guitar. He asks me if this is the correct line for buying bus tickets and if I have an antacid.

We have just flown into Mexico City on the budget airline Volaris, which lands in Toluca, about an hour outside of the city. We get to talking and end up sharing a cab after our bus ride.

Gonzalo is a contestant on Mexico’s version of American Idol, one of the 12 finalists from the state of Chihuahua. More specifically he is from Ciudad Juarez.

So I ask him the question that has been on my mind for the last week.

“Is it really as bad as they say it is in Juarez?” I ask skeptically.

“It’s worse. Much worse than the media makes it out to be.” He tells me, his head turned around from the front seat of the cab. “The other day three men we found hanging from a bridge, decapitated with their testicles cut off. I went to high school with one of those guys.”

I make a disgusted face and look at the floor of the taxi. Gonzalo continues his conversation with our cabbie that I had interrupted.

This guy has been driving a taxi in Mexico City for 30 years. Before that he drove a truck for the postal service. 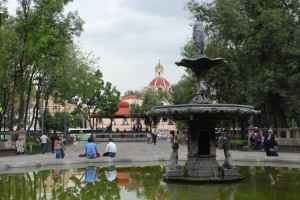 The Alameda, a park in downtown Mexico City

This illustrates to me what an incredibly massive city this is, the biggest in North America and the third biggest metropolitan area in the world.

We cruise down the highway and eventually onto the smaller streets and get jammed in traffic. Soon I am let off at Cuauhtemoc metro. I shake Gonzalo’s hand, wish him luck in the competition, and promise to watch him on national television.

I am hungry, so I immediately make my way to the nearest taco lady. She dishes out one egg and bean taco and another with chile relleno, a green pepper stuffed with cheese. I have a huge smile on my face when I’m finished and hand her 17 pesos. She is happy that I like her food.

The Mexico City metro is enormous, comprised of over 175 stations with a daily ridership of five million. Tickets are only three pesos, the equivalent to US$ .25. A poster at the ticket booth proudly announces that the cost of operating is nine pesos per ride, but government subsidies bring the coast down.

I hop on and in 30 minutes arrive at Viveros where my friend Ana picks me up in the car. We’re off immediately to get some tostadas with shrimp before we head downtown to the Museo Nacional de Antropologia.