I went to Mexico City to See an Ice Axe

I went to Mexico City to See an Ice Axe 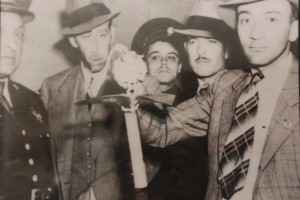 Well, not exactly. But the house of Trotsky has definitely been a highlight. You can’t actually see the ice axe that was used to assassinate him, but if you’re into a moderate amount of gore, you can see the bullet holes that the team of assassins fired into his bedroom wall as they busted through the window on May 24th, 1940, during an unsuccessful attempt at his life. He and his wife survived by hiding behind their bed.

Trotsky, born Lev Davidovich Bronstein, was exiled from the Soviet Union in 1929 and spent the next seven years living in different countries including Turkey, the US, and Norway before being granted political asylum in Mexico in 1937. It is then, that he was invited to live with Frida Kahlo in her Blue House in Coyoacon, Mexico City. 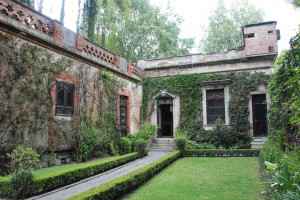 A couple years later, after a quarrel with Diego Rivera (may have had something to do with Diego’s shift in political philosophy or Trotsky’s affair with his wife Frida, not sure exactly) Trotsky moved a few blocks away into a well-fortified home on Vienna Street. The small compound would become more and more secure as time passed and the fear of Stalin loomed from afar. Slowly, windows had been transformed into doors, doors into walls, and security and alarm systems supplied by the Mexican government improved.

The home was located in Coyaocan, a green and pleasant, once separate town that has now been engrossed by Mexico City. It has long attracted artists and intellectuals. The home is modest. Simple décor in the rooms, basic plumbing in the bathroom, and a kitchen with a gas stove, traditional Mexican pottery, and an icebox. 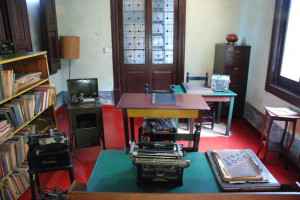 Near the end of his life he suffered from high blood pressure and headaches but managed to continue working tenaciously, nearly ten hours every day, even publishing a few key works. A biography of Stalin, which he was laboring over at the time of his death, was left unfinished. He had a study, where he worked (you can still see all his books, including the essays of Marx and Engels) and an office where his wife and small team of secretaries transcribed his work.

Surrounding the house is a peaceful courtyard and garden with palms and chicken coops. This is where the architect of the Bolshevik Revolution and creator of the Red Army’s ashes remain buried in front of a granite memorial carved with a hammer and sickle. 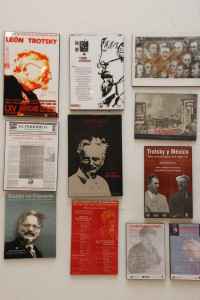 One overwhelming feeling I got after visiting the home and museum was just how real of a threat Stalin was, even from several thousand miles away in the Soviet Union. As the Central Committee of the Bolshevik Party in 1917 poster in the museum illustrates, Trotsky was the last remaining comrade until he too, was hunted down and killed just like most of the others.

So where exactly is that ice axe that Jaime Ramon Mercader del Rio used to bash Trotsky over the head with on August 20, 1940? Apparently it has resurfaced 65 years after it was stolen from the Mexican police. 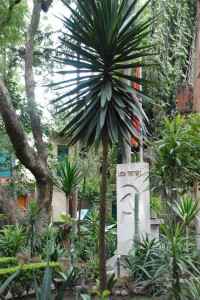 See the rest of the photos from the Trotsky house and museum.