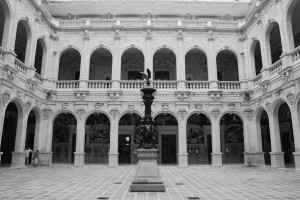 Because of the situation in Juarez, I thought it would be a better idea to cross the border at one of the smallest and quietest border crossings into one of the safest border towns in Mexico. But the safety situation is relative, and a local school teacher whom I left my car with in Presidio, TX says that worried parents that can afford to, are sending their children over to Presidio schools.

At about 1pm I flashed my passport to the US border guard and walked over the Rio Grande, which the Mexicans call the Rio Bravo. On the other side I got a tourist card good for a six month stay.

Ojinaga is dull, hot, and dusty, although probably not as dull and dusty as Presidio. I walked in the pounding sun about a mile to the bus station and handed over 180 pesos for a ticket on the next coach to Chihuahua, which didn’t leave for another three hours. Before going out for a mediocre cheese and bean burrito (which would be my only food that has been less than stellar in all of Mexico) I passed out for a few minutes, sweating in the tiny hot bus station waiting area. 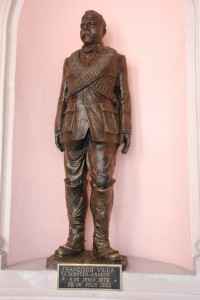 A statue of Pancho Villa

The four hour ride to Chihuahua took us through some desolate and beautiful desert, much like that on the other side of the Rio Grande. But the shrubs and grasses were all green due to the monsoon.

Chihuahua is also experiencing some drug gang related violence recently, although it is not in the same league as Juarez, Tijuana, Nuevo Laredo, or Reynos. But I had a friend pick me up at the bus station and stuck with him most of the time except when I spent the day wandering around the city center visiting the tourist-friendly sites.

Except there were no tourists—no foreign tourist anyway. I visited the Pancho Villa Museum (Museum of the Revolution), the Cathedral, ducked into a cantina for some tacos and a beer. Even at the local artisans and handicrafts store I saw no other shoppers.

The Palacio Gobierno is certainly worth checking out. At first, when I entered, the old stonework reminded me of an medieval European cloister. The courtyard is lined with beautiful murals, two of which illustrate the major industries of Chihuahua state: ranching and mining. 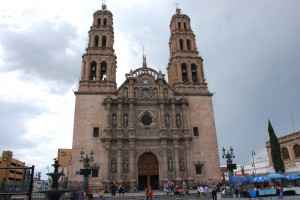 The Cathedral in Chihuahua

Which reminds me that it’s impossible not to notice all the vaqueros, or cowboys that you see around everywhere. And where there aren’t vaqueros, there are shops selling cowboy hats, dungarees, Wrangler shirts, and fancy leather cowboy boots.

Outside the Palacio is a sober reminder to the current state of Mexico. It is a memorial to the 400+ woman that have been raped and murdered in the city of Juarez since 1993. Next to it is another memorial to the 13 innocent townspeople that were massacred by a heavily armed gang in 2008.

The safety situation is not all bad news for travelers to Mexico. Of course you can do your best to avoid opportunistic crime and as long as you’re not involved in the drugs war, you shouldn’t get killed. Just beware of the stray bullets. But better yet, as a tourist you can easily avoid the very focalized danger areas. I will be writing much on the safety situation in future posts, so check back.