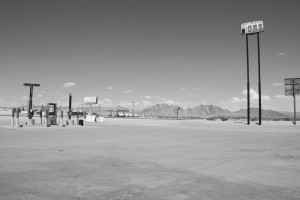 Getting gas outside Vegas

1:43 am. St. George, Utah. At Denny’s refueling. The only place in town that’s open. Two cups of coffee down. Two hours to Vegas to go. We’re getting wired for the drive. Not planning on sleeping tonight. We will hit the casino floor when we arrive. Excaliber, Luxur, Paris.

We’ve got two reserve gallons of water in the car, two shot blocks apiece, a quarter tank of gas and 123 miles of desert between us and beginning of the night.

We just pulled into a closed but well-lit gas station to look at the map and find our way back I-15. Gilbert stepped out of the car to look for a restroom. Immediately out of nowhere two police officers arrived on the scene. The one cop was helping me with directions to get to Denny’s and the other cop was aggressively, almost accusatorily questioning Gilbert.

Gilbert was suspicious for having a film canister in his pocket. In fact, officer, he does shoot film. Have a look inside, there is actually an unused roll of film.  And the knife dangling from his waist? We have been camping, officer. We’re on a road trip, from Virginia to California and back. Tonight stopping in Vegas. I didn’t say sleeping, just stopping in Vegas. Continuing to Death Valley when daylight comes. Ok, right, back to St George Blvd and then left and left on the ramp to I-15 South. Thanks so much. We’ll wear our seatbelts on the freeway, don’t worry. Yes, officer we call them highways back east. Goodnight. Friendly wave.

Usually it is difficult for me to distinguish my feelings for a place and the experience I’ve had at that particular place. I have a habit of inflating my opinion of the place, not able to separate it from the good experience I had there and judge it on its own.

Las Vegas was such a special place, that despite having an excellent time, it is one of the few places I don’t care if I ever visit again.

Gilbert and I agree that driving through the desert for two hours at 2:30 am jacked up on caffeine singing along to Led Zeppelin was a blast. And even though I lost about $65, we still had fun playing slots, Roulette, and Black Jack. Rolling into an almost empty Excalibur at 4:45 am, getting a free bloody mary, chatting with the dealers, checking out the other casinos: Luxor, Paris, Ceasers, the Bellagio were all fun, even until the point of our running-on-empty, lack of coffee induced crash at 9am. We even had a ribeye and egg breakfast for $4.99 at Bill’s.

Vegas is definitely the weirdest city on the planet. Not only the multitude of Epcot-in-a-strip mall architecture, but the difficulty of being a pedestrian, the abundance of concrete, the fact that it was 95 degrees at 4:06am, the overall trashiness,  and the complete lack of reason to exist.

We spent till 10:30 am walking around and decided six hours was enough. We sweated our way through the hot streets making our way back to the parking garage laughing to ourselves at the absurdity of this place and our short time here and the intensity of the 12 hours leading up to our arrival here.