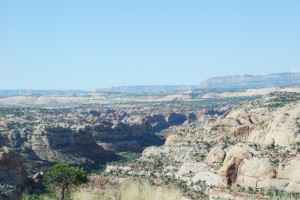 We camped the night before on BLM land up on the Devil’s Backbone Road, the original road from Boulder to Escalante, close to the last place in the continental US to be mapped. Up until 1940, the US Postal Service was still delivering mail to Boulder, Utah by mule train across the slickrock and through narrow canyons. In 1935 construction ceased on the million dollar highway (not to be confused with Colorado’s million dollar highway from Silverton to Durango), built by the Civilian Conservation Corps.

We started down the extraordinarily scenic, budget-busting highway with plans to hike to the Lower Calf Creek Falls Trail. Finding it closed, we decided to hike the Escalante River Trail. At the trailhead we met a woman who suggested an unofficial trail to Upper Calf Creek Falls. “It’s not marked. At the top of the hill, just pull over. It leads to a swimming hole that only locals know about.”

As soon as we heard local and swimming hole in the same sentence, we were back in the car driving up the hill. Unfortunately it wasn’t as easy to find as she made it out to be. Twice we picked the wrong trailhead, the second time going almost 30 minutes into a steep canyon and having to turn around.

We knew we were walking down into the wrong canyon when we met three guys on their way up. The two in their early twenties had jeans, t-shirts, and sun red faces. They were Mormons from Oregon and Ohio on their mission here in Utah. I asked them what their mission involved. 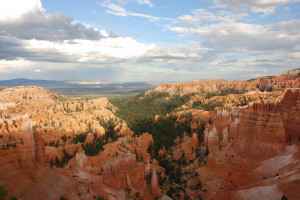 “Preaching the gospel.” They respond, keeping it short.

I’m wondering why the Church of Latter Day Saints needs its members from other states to come to Utah. I thought there were enough Mormons in Utah already.

“We work six-and-a-half days a week. We get a half day to do our laundry, write emails, and have fun. This is what I’m doing for fun.” He says that with a smile as he struggles up the canyon wall.

The older guy, probably in his early thirties, is wearing mud-dried jeans, a short sleeve button down shirt, and a ball cap. He is a rancher. He specializes in breeding high-altitude bulls. I asked him how long he’s been up here, in the high-altitude of Grand Staircase-Escalante. “About four years. I moved down from northern Utah.” I comment on how healthy and huge the cattle are that I have seen on the way driving here. He smiles.

They lead us in the direction back to the cars and explain the trailhead we want is just a mile further. We hike about a half an hour from that point and reach Upper Calf Creek Falls, dip into the cold water and soak in the hot sun.

As we leave one of our newest and biggest National Monuments, I vow to return next time with a four-wheel drive vehicle and a mountain bike. The guidebook reminds me that most places in Escalante require a high clearance vehicle to visit.

From here we transition back into one of the “Disney” National Parks. Over-packed, full of rental RVs and European, Asian, and American families on vacation. We hear probably 15 different languages on a 45-minute hike. And just outside the entrance to the park is the theme park-fake private town that exists without existing: Bryce Canyon City.

On the dark drive over the Markagunt Platau to  Cedar City we joke about Ebenezer Bryce’s quote on the extraordinary landscape he used to graze his animals on. “It’s a hell of a place to lose a cow.”