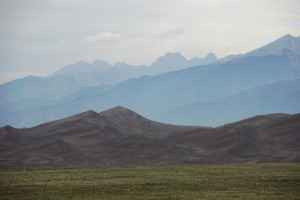 Leaving Winter Park on our way south we would cross the Continental Divide three times before day’s end. A few miles before Vail we exit I-70 towards Breckenridge, where we stopped at Breckenridge Brewery’s  Brew Pub to share an eight-glass sampler. Through the Hoosier Pass, we just barely descend into Alma, the highest incorporated town in North America.

Continuing on 285, we pass The Castles and down into the Arkansas River Valley with Mts. Harvard and Antero looming to the west. Soon after we turn onto the straight-as-an-arrow Route 17 and cruise south through the San Louis Valley, the stunningly beautiful Sangre de Cristo back lit by the setting sun. These “Blood of Christ” mountains were named by a Spanish priest as he was dying under a crimson sunset. 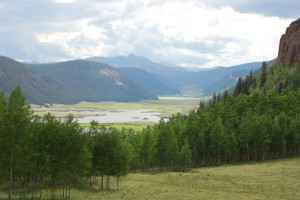 As the scenery transitions from high-elevation ski resort towns into a broad river valley with taller base-to-peak mountains, unearthly and gigantic sand dunes began to appear to the east. If we weren’t traveling with good maps and specific intentions of visiting the Great Sand Dunes National Park, we would have had no idea what we were approaching, much the same as the first westerner to stumble upon the dunes.

That night we snag a sweet campsite in the park under the dunes and in the morning we wake up as close to sunrise as we could to climb the dunes in the best light possible. We reach the top of the dunes, which reach 750 ft. high, and see over to the other side. These dunes are incredible and even taller than those I’ve climbed in the Gobi, the Sahara, or at Wadi Rum in Jordan. The park had few visitors and is off the typical Colorado tourist route. 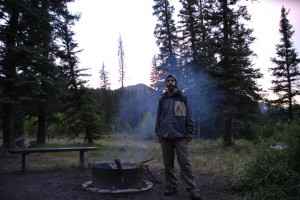 Back on 17 we stop in Moffat at the Mirage Trading Post and meet the owner, Sharon, who tells us about the nearby town of Crestone, which she describes as “Boulder South” or “Sedona North”. We asked how she ended up here in this not-even-one-stoplight town.

“I came down here in the 70’s when someone took me to Valley View Hot Spring. Then it cost 75 cents to get in. I ended up staying to work for a few years.” Valley View is a clothing optional natural hot spring resort, now part of a land trust.

Leaving Moffat, I tell Gilbert to go left when we should have gone right and we consequently end up going a little further south and over a much more scenic route. 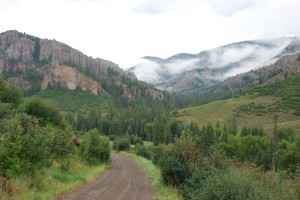 We follow the Rio Grande for an hour or so up to the start of the old trail that lead up to Stony Pass, where the mule trains used to load up to take supplies over the San Juan Mountains to Silverton before the Denver and Rio Grande railway was built. You can still take the route by four wheel drive. After that we continue through the gorgeous mountainsand valleys and cross the Continental Divide at Spring Creek Pass for a seventh and final time before enjoying the Matterhorn view at Windy Point and descend into Lake City.

We finally hook back onto Rt. 50 where we drive west a few miles and decide to turn up into Gunnison National Forest. Nine miles up a dirt road is a campground, vacant except for the host and two other campers. We choose site 11, by the river, under a high, vertical rock face and spend the night standing around a struggling campfire in a steady drizzle.