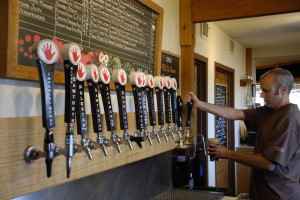 After a big final night out in Boulder, we rolled out of town in the am twenty miles south to Golden where we picked up the keys to the condominium in Winter Park where we would be staying the next few days.

Two days earlier, on the way home from Rocky Mountain National Park, almost by accident we stumbled upon the Oskar Blues Brewery. This began what would become the Colorado beer tasting experience.

There would be Avery in Boulder with its dollar four-ounce samples. Gilbert and I would kill nine of those together on the picnic tables out front of the tasting room, our favorites being the Out of Bounds Stout and the Maharaja Imperial India Pale Ale. Sampling with a tasting partner means being able to try double the brews. 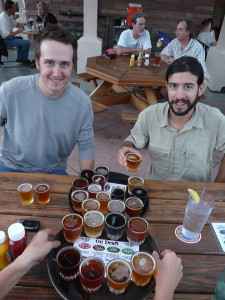 The Sampler at Oskar Blues in Lyons

Next was Oskar Blues Brewery, which began in Lyons, a small town north of Boulder right on the edge of the mountains.  The idea to stop there came to Scott somewhere along Route 36 from Estes Park. After our eight tasters for nine bucks (cheers to the Gubna Imperial IPA and the Gordon Imperial Red, two brew you MUST try before you die!) we were quite excited that our server Andrew hooked us up with a private tour of the brewery with Anita. Although the majority of brewing is done in the expanded new brewery in Longmont, it was still fun to check out the place where the famous microbrew-in-a-can all started.

The following day we checked Left Hand Brewing Company off the list. Started in 1993 in Longmont, it retains a microbrew/small town/local feel, while being large enough and having the demand to be exported to 28 states. Because we had learned our lesson from the massive taster set at Oskar Blues and because I was driving we unfortunately only ordered four samples. (And I was poured a little taste of the Juju with ginger kisses as well).  All I have to say about Left Hand is they are seriously modest folks and brew some killer beers.

So back to the last night in Boulder… Here we got a chance to taste some pints at Walnut Brewery, The Boulder Draft House, and finally the Mountain Sun Pub & Brewery. Now it may be my last pub of the night bias talking here, but this place rocks. After hearing that it was our first time here, our server brought us a taste all 11 beers on tap! After long debate, and loving the Jah Mon, we eventually settled on a pitcher for our table. This place is quite simply a hippie beer lover’s paradise. Don’t leave Boulder without an evening trippy-trip to worship the Mountain Sun. 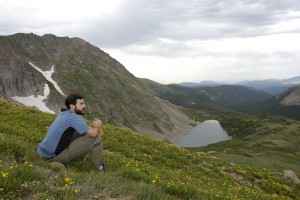 On the Continental Divide up Devil's Thumb

But our week in Boulder wasn’t all beer. Besides our three-day trek up our first fourteener, Longs Peak, we drove up to visit the National Center for Atmospheric Research and a walk up towards the flatirons above Chautauqua Park for a great view of the city.

Following Boulder, we had a relaxing four days in Winter Park, hiking the Devil’s Thumb up to the Continental Divide and another day trip climb up Torreys Peak, which I will cover in the next post.