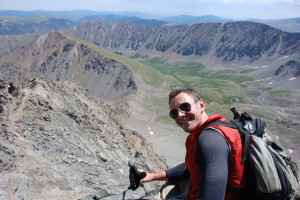 Nick and the Kelso Ridge

Out of breath, hysterical, physically exhausted and shaking from extended adrenaline and fear, I round up the final scramble to the summit of Torreys Peak. There are a few people already there. But they have come up the easy way, on the super-highway-of-a-trail from the direction of Grays Peak.

My eyes are focused on Nick. He’s at the top looking directly at me. Part of me is thinking of slugging him with my remaining energy. But a stronger part of me is bursting with so much joy that I am on the verge of tears. I have made it. I give him a huge hug. Nick has coached and slowly guided me up the Kelso Ridge, an at some points razor-sharp route up the northeastern edge of Torreys.

“It’s more of a climb than a hike.” Says Gerry Roach, author of Colorado’s Fourteeners (Colorado’s Fourteeners, 2nd Ed.: From Hikes to Climbs). We really should have read the route description more closely, but we were confident from our recent summiting of Longs Peak. “No, problem, we’re up for a little more class three.” We thought. But we failed to read the part that said it contained a brief section of class four. Roach describes class four as not only using your upper body, but actually having to use those muscles to propel yourself upwards. And if you’re going down a class four, many chose to reppel.

Stephen, Nick, and Gilbert on the summit of Torreys with Grays Peak behind

But we trusted Nick. He’s been doing this for years. And it’s in his blood too. His great-grandfather summited all 54 of Colorado’s fourteeners and was the first to ski down Mt. Evens. Nick scouted the tough sections ahead of us and stood waiting like a stoic eagle perched on a cliff face, balanced, pointing out exactly which path had looser gravel and which hand holds were solid. “Try before you buy.” He would repeat endlessly, encouraging us to test the rocks before trusting them with our weight.

The climax of the climb was the class four, a section referred to as the “knife edge” when we had to straddle the granite for about 10 feet and then hoist our bodies over a boulder. Even though it was a sheer cliff hundreds of feet off both sides, I felt more secure here than during previous brief narrow sections of loose gravel and bad handholds with one-sided drop offs. Crossing the knife edge was like riding a granite horse high in the sky—with my heels digging into the rock face like spurs into my horse. I felt secure and balanced like this, even when the wind picked up. 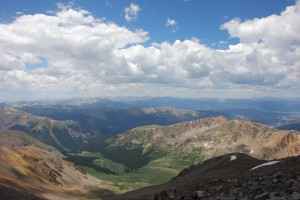 Constantly encouraging each other and staying mentally positive the whole way, we overcame our fears and conquered Torreys. I’ve been hiking my whole life, all up and down the Appalachians, the Swiss Alps, the Caucasus, the highlands of Scotland, and Kamchatka, but I’m not used to scrambling, especially the class 3s and 4s that I’ve hiked in the Rockies these past few weeks. They’ve made me feel like a completely inexperienced amateur.