Beyond the Carpathians: Travels in Transcarpathia

Beyond the Carpathians: Travels in Ukraine’s Transcarpathia Region

Journey from the Carpathians to Mukachevo and Uzhgorod

In Yasinya I got an 11:55 bus bound all the way to Mukachevo. So I decided then, that’s where I would spend the night. But it would take about 5 and a half hours over beat up roads in an old beat up bus to get there.

You could say this was a forgotten corner of the USSR. The furthest reaches west of Moscow, this territory once belonged to the Austrian-Hungarian Empire before the First World War.

Its name, Zakarpattia, means “beyond the Carpathians“, which it is, when traveling from Kiev. In English, it’s known as Transcarpathia. 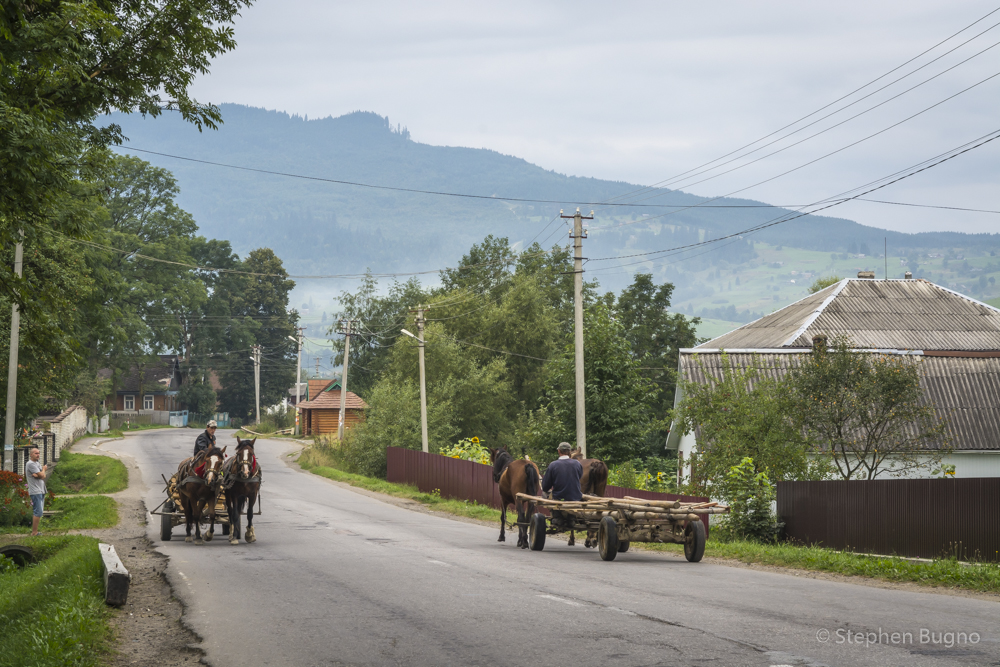 we follow a river valley through the low mountains, passing a small church every 10 minutes. It’s hard to distinguish between the villages in this stretch, as houses line the whole valley. The highest sections of the hills are forested and just below that visible line is grazing land for cows and goats.

Our bus is old and grimy and blasts of dust burst in from time to time. This is not a high priority route, hence the aging bus. Most of the journey goes westward, so the south facing windows receive the brunt of the late summer afternoon sun. I’m starting to sweat.

The big towns are about 45 minutes apart and we pull into those stations for about 5-10 minutes– enough to use the toilet, get a drink, and pick up new passengers.

After Rakhiv we’re mostly out of the mountains and from then on we’ll be “beyond” the Carpathians. Here the scenery isn’t as nice as we skirt along the Romanian border. But a few hours later it gets beautiful again as we near Mukachevo. Here the farms are bigger, the corn is almost ready to be harvested, and we pass the occasional horse-drawn cart.

At about 5:30 we’re approaching Mukachevo. It’s a small city known for its castle. It’s one of the most pleasant cities in Ukraine with a genuine Eastern European feel. The buildings are Hapsburg-era, the central part of town is a cobblestone pedestrian zone. Mukachevo feels different than most of Ukraine because it’s close to foreign borders. I see vehicle tags from Hungary, Slovakia, Poland, and the Czech Republic. I also notice a bigger Roma population.

Life seems to be good in Mukachevo. There are plenty of cafes and restaurants, little signs that show people here have extra money to spend. Although some of this could be a boost from tourism. At a restaurant, I hear English being spoken for the first time in a week. So it is a bit more cosmopolitan than the places to the east from where I’ve come.

Mukachevo’s Castle, Palanok rises above the western edge of town on a volcanic hill. It was built by Hungarians in the 14th-century and security was later tightened by French engineers. Today there are exhibits inside and commanding views from the sturdy walls. This is where I spend the morning before leaving for Uzhgorod.

Uzhgorod is a border town along the river an hour further west from Mukachevo. It has an even more multi-cultural atmosphere, with influences from the surrounding countries (Slovakia, Hungary, Romania, and Poland). With its castle, museums, old churches, and riverside restaurants, Uzhgorod is a favorite of tourists, as an off-the-beaten-track destination for regional travelers in the know. In Uzhgorod, I end my Carpathian adventure and take a bus across the border to Slovakia. 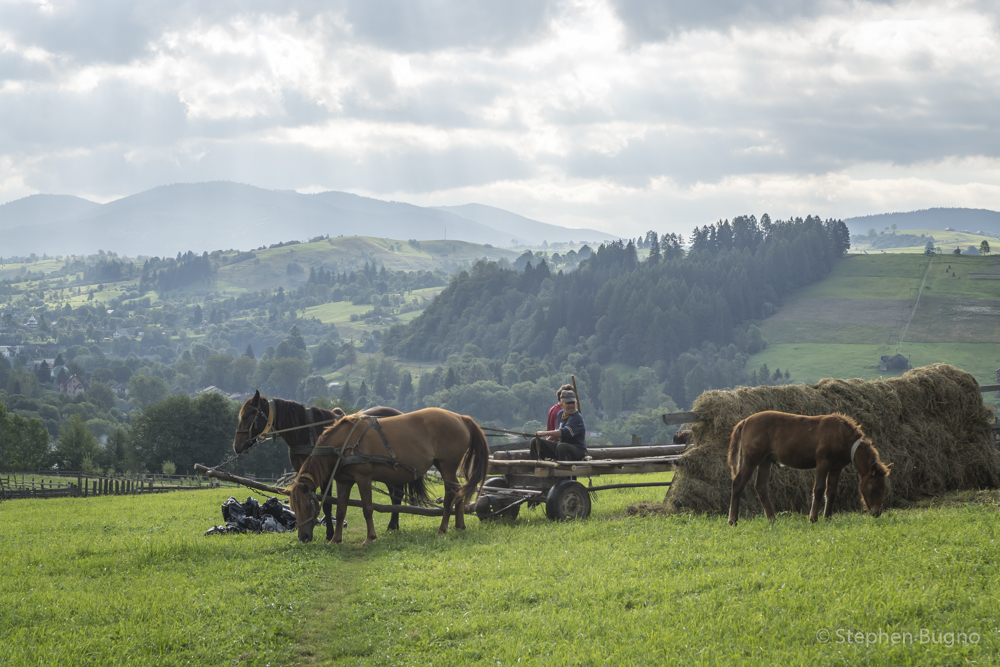 The town of Yasinia lies in the heart of the Carpathian Mountains of Ukraine but is actually in the region of Zakarpattia, translated as Beyond the Carpathians. 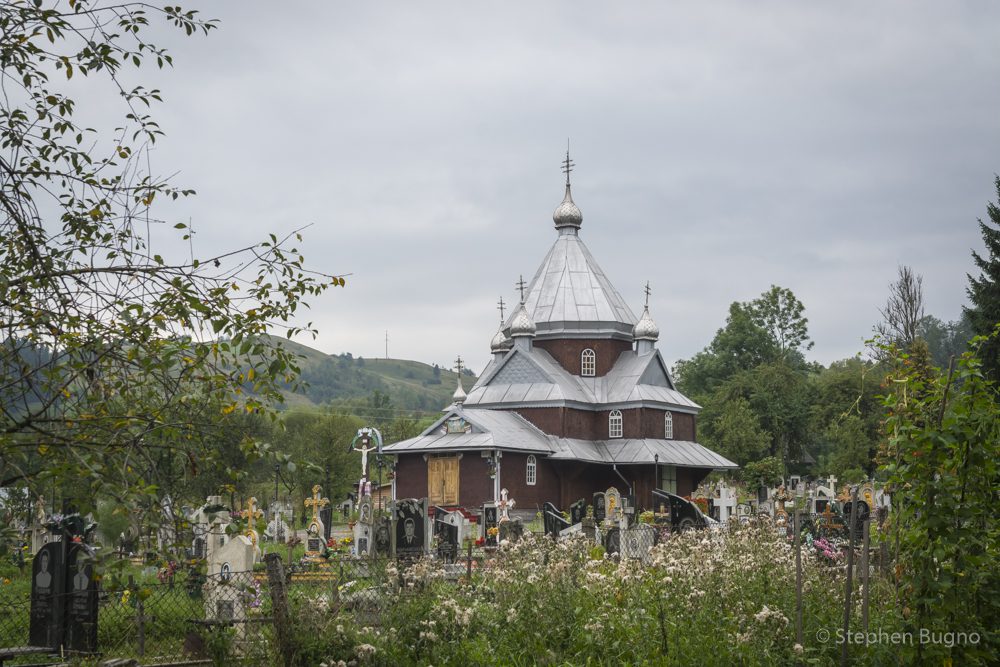 The region is dotted with little Orthodox churches. 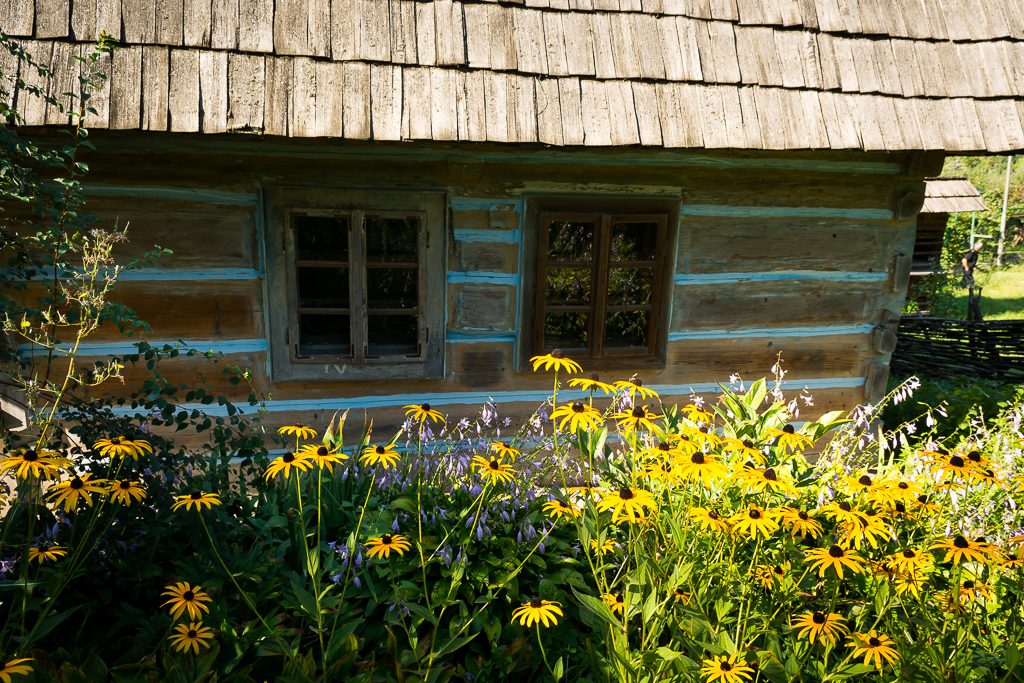 Although this is at an outdoor folk museum, traditional houses can still be seen on rural lanes. 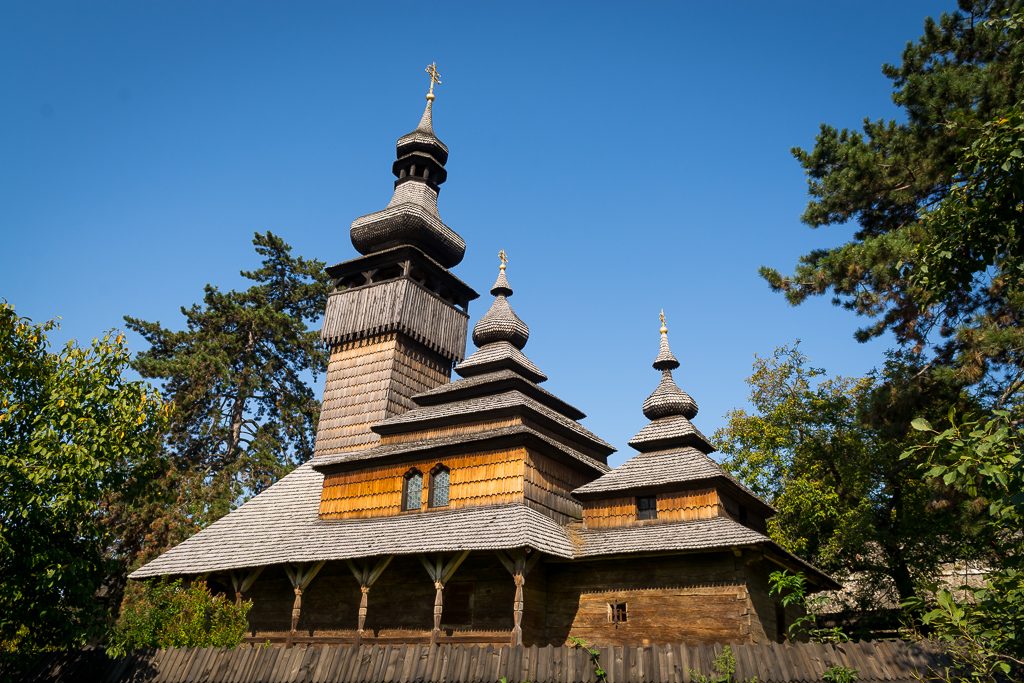 Nearly 1,900 wooden churches have been identified in Ukraine as of the end of 2010. 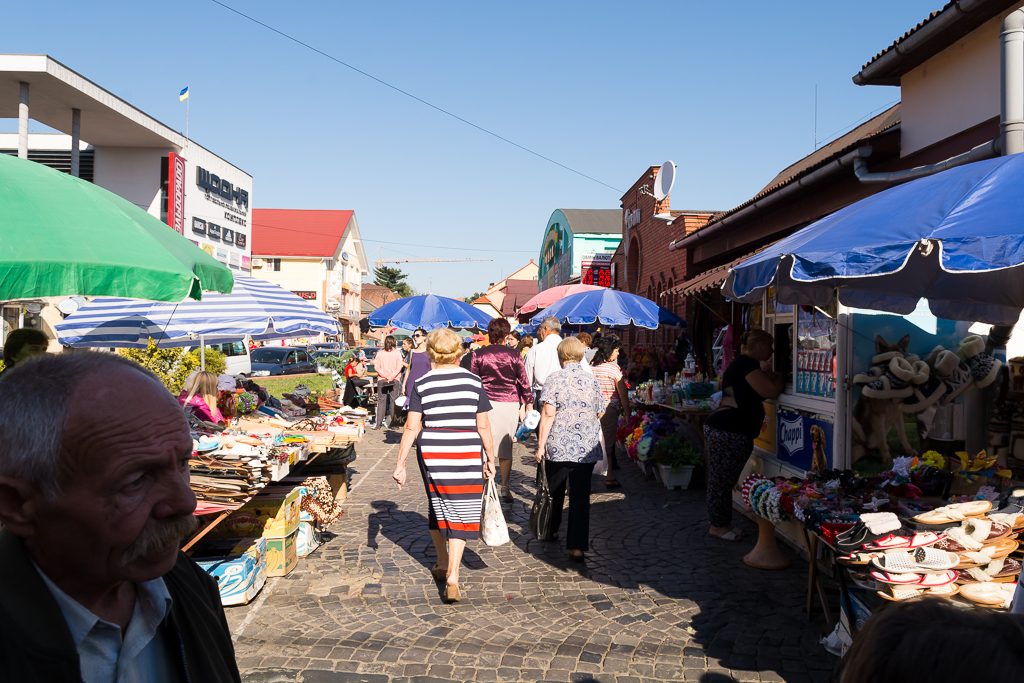 As a city with about 85,000 inhabitants, Mukachevo has a bustling market which flows out into the streets. 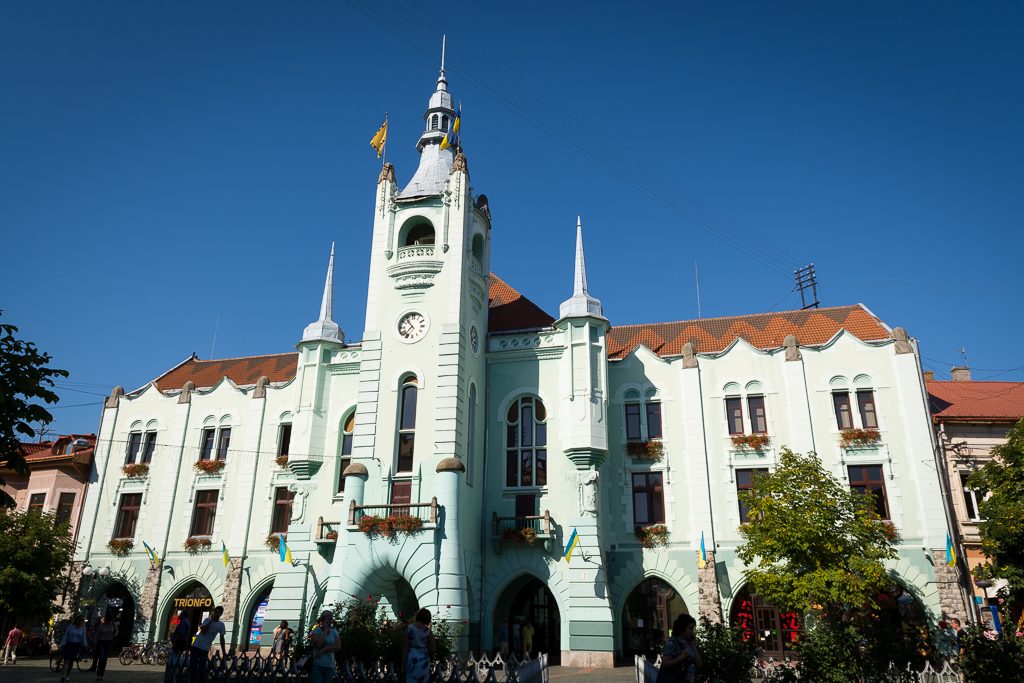 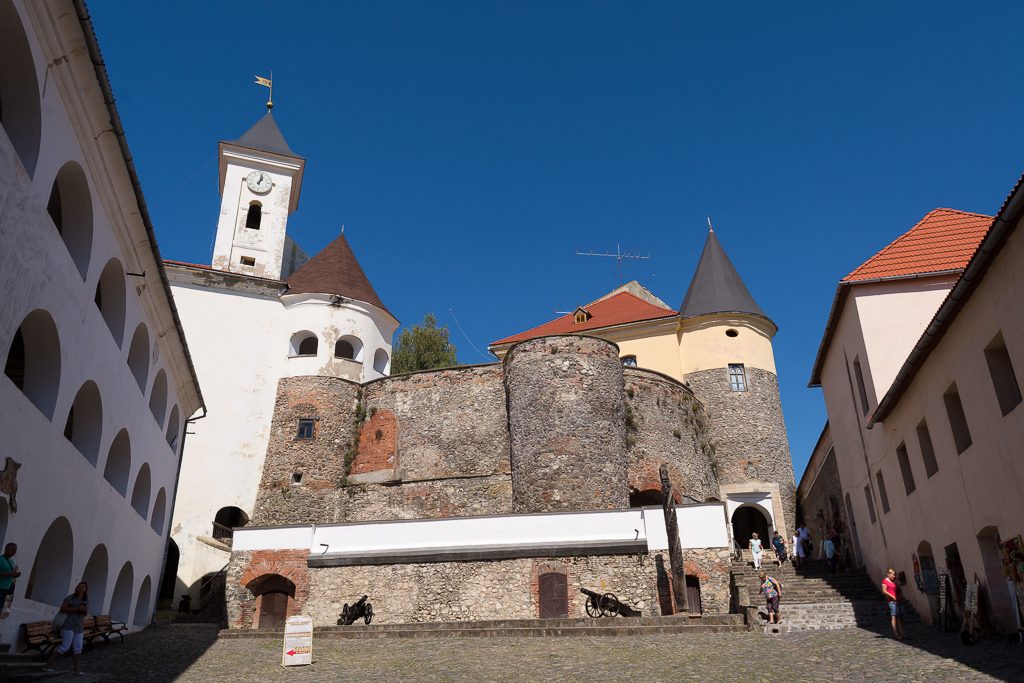 Mukachevo Castle stands elevated on a former 68-meter-high volcanic hill above the outskirts of the city. 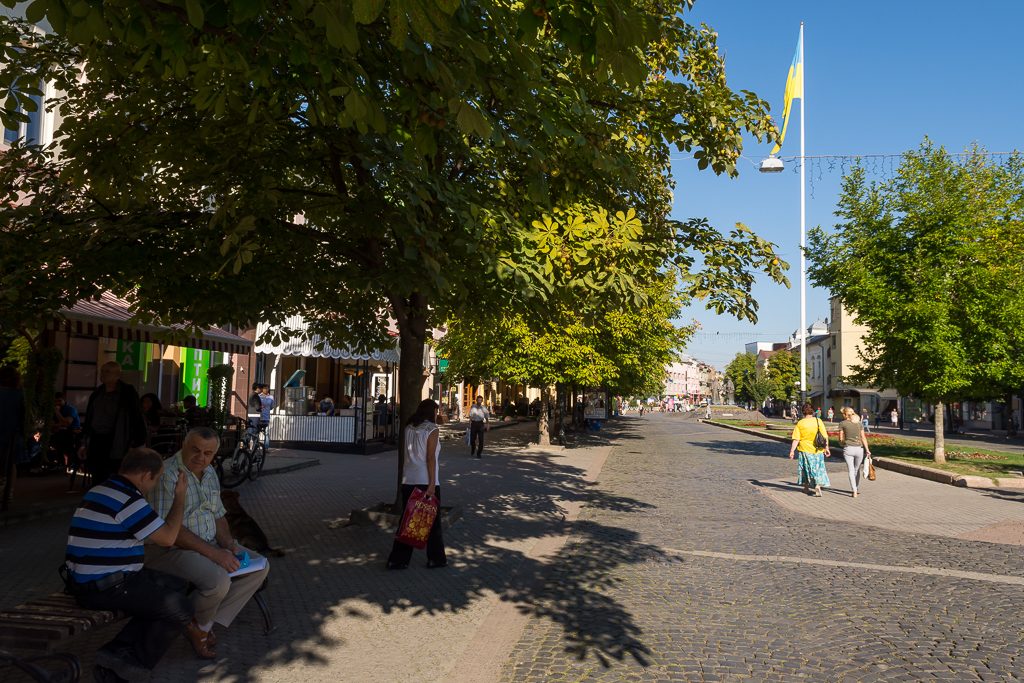 The cobblestone streets of Mukachevo are mostly free of heavy traffic. 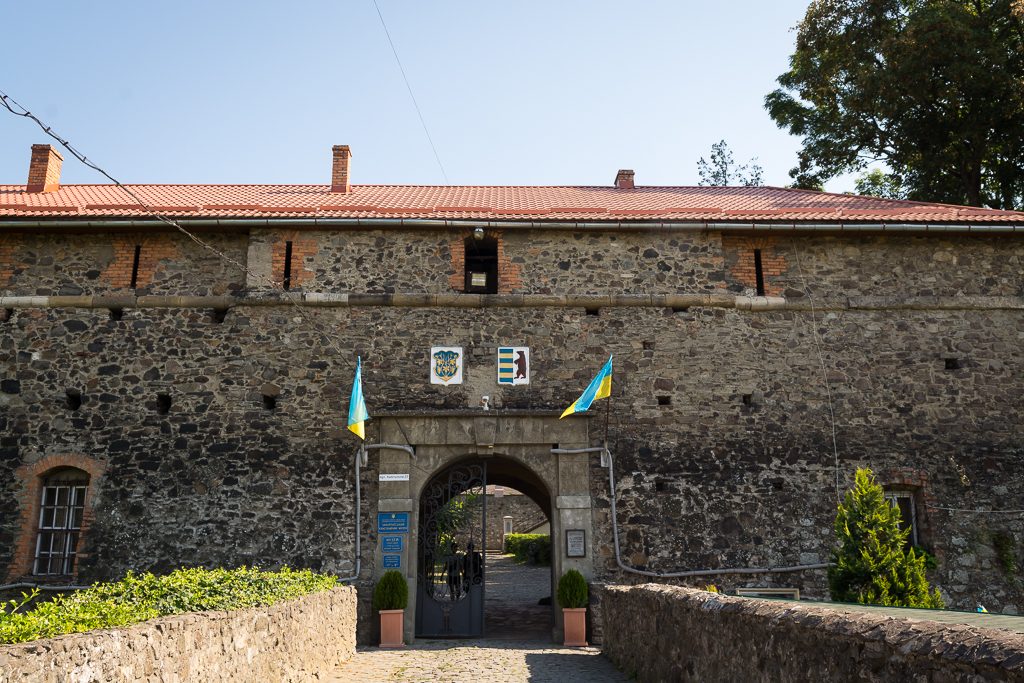 Uzhhorod Castle is a large citadel built on a hill. It was constructed in a mixture of architectural styles and materials between the 13th and 18th centuries and figured heavily in the history of Hungary. 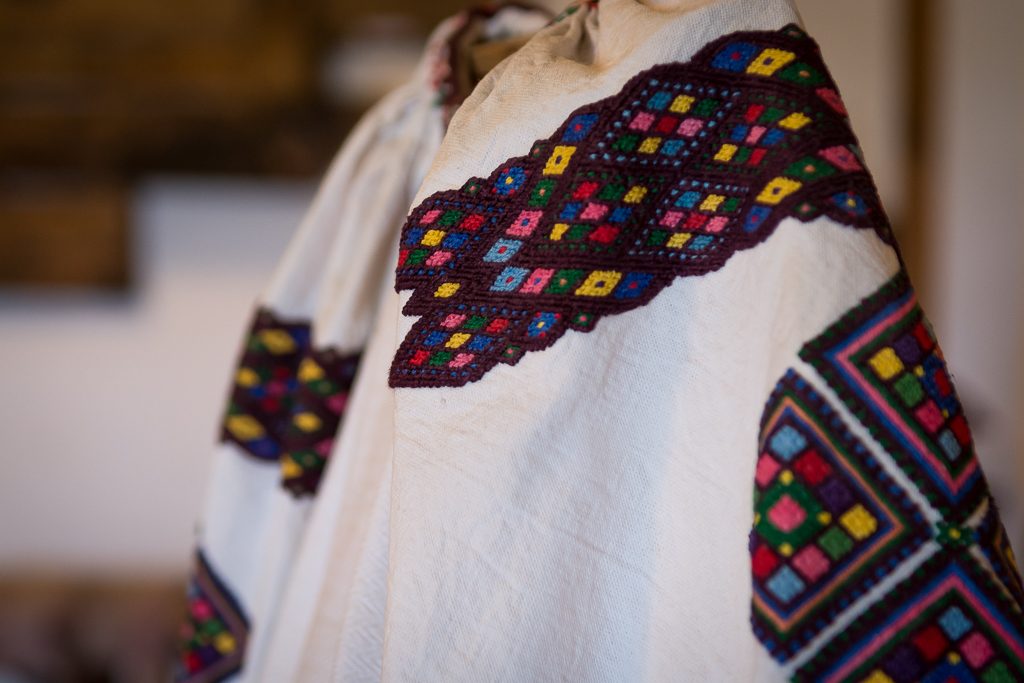