Photos from Dog Mushing in Norway 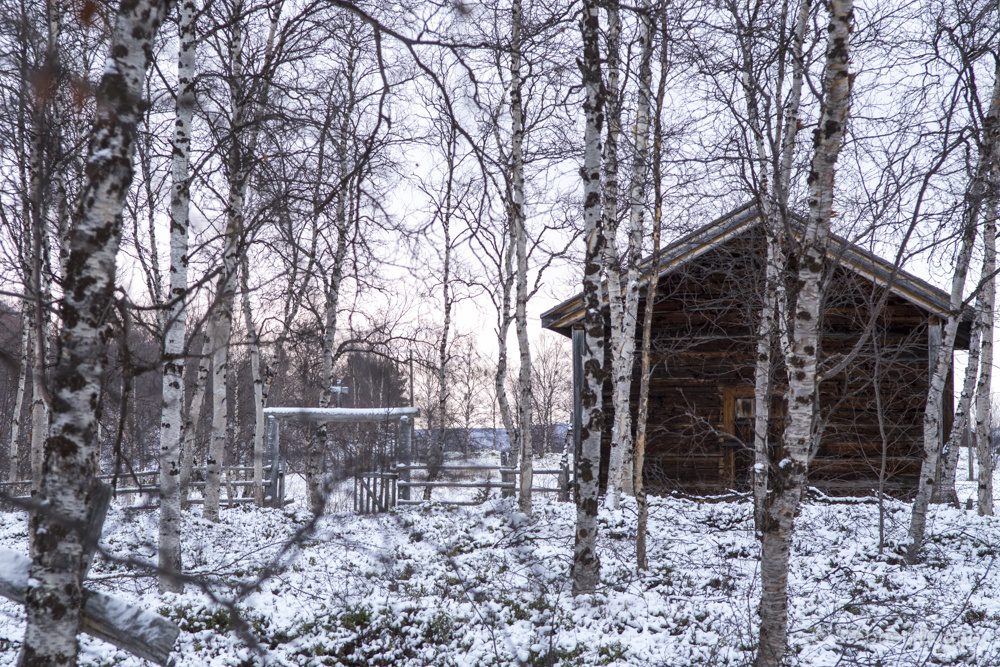 My Week in Northern Lapland in Winter

I didn’t know exactly what to expect in the northern part of Lapland, at the very top of Finland. I knew there wouldn’t be much daylight at this time of year, and I knew that it sure was going to be cold. What I didn’t know was all the cool stuff that we could see and do there. 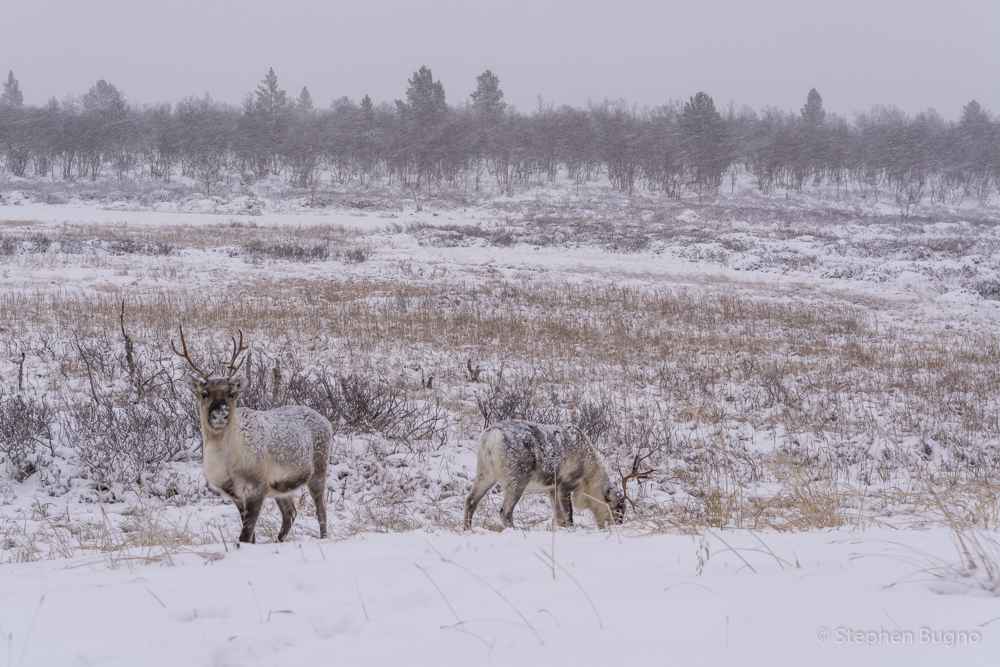 If you’ve been to the north of Russia, Norway, Alaska, or Canada, you might have an idea of this landscape. The green of the fur trees and white of the birch stretching out to the horizon. Small mountains and lakes here and there and one road. One road heading north. When we landed in Ivalo, Tiina met us at the two-terminal airport with a big hug and we piled our backpacks into the trunk of her SUV. Ivalo is an hour flight north of Helsinki, but Utsjoki, where we were going, was another two hours north by car. When we arrived in the village of Utsjoki we would be at nearly 70 degrees north latitude, far above the Arctic Circle. There we settled into our cabins and detailed the remainder of our week in northern Lapland. 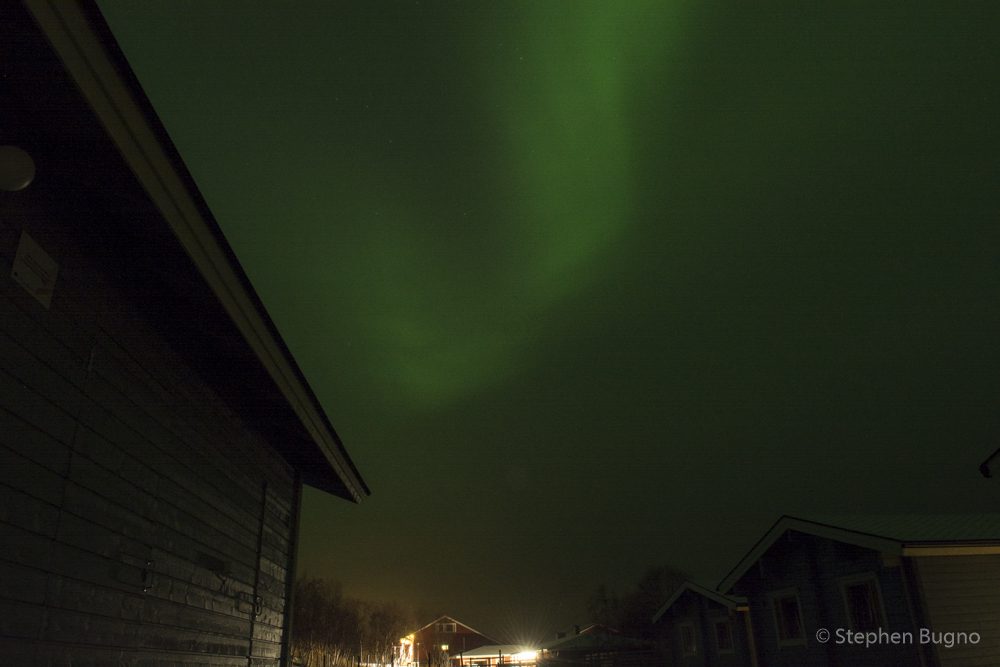 Our main objective for coming here was to see the northern lights (the tour provider’s name, after all, is Aurora Holidays!) But as you’ll see there’s plenty to occupy the days as well. For at least three of the nights we suited up in the provided snowsuits, hats,  and gloves and readied our cameras and tripods. Normally it’s cloud-free in the winter (but there are no guarantees from mother nature) but technically it was the late autumn and there was still quite a bit of water in the atmosphere in the form of clouds. So we had to drive some nights to find a clearing. But then the show began.

When describing the northern lights to someone who has never witnessed the phenomenon, what first must need to be said is: you have to see it for yourself. It’s not exactly like the pictures. First, the green (and sometime other colors) is not as bright as you might see in the photos. The other thing to know is that the northern lights are changing and morphing as you watch. That can’t be captured in a still photograph. That, I believe, is the most magical part of the experience. You’ll never forget the dancing colors in the nighttime sky. 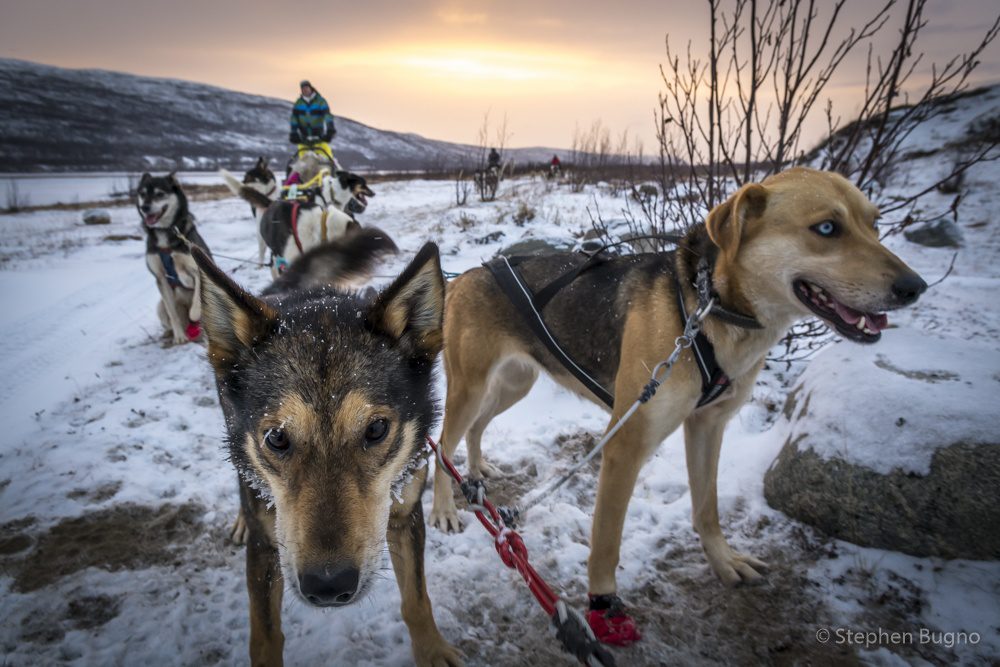 I never expected to have so much fun dog-sled mushing. North of Utsjoki, in Tana, Norway, we met Dag and his forty-some huskies at Tana Husky. The snow wasn’t deep enough to take the sleds out, so we had to take the “sleds” on wheels. But it was still an awesome experience. For anyone out there that feels sorry for these work-hard dogs pulling the sleigh, any dog musher will tell you these dogs are like Bruce Springsteen. Baby they were born to run. Keeping these dogs inside and not letting them run is animal cruelty. Dag took us over the river and through the woods for a couple hours and even let us take control of the sled for a while. 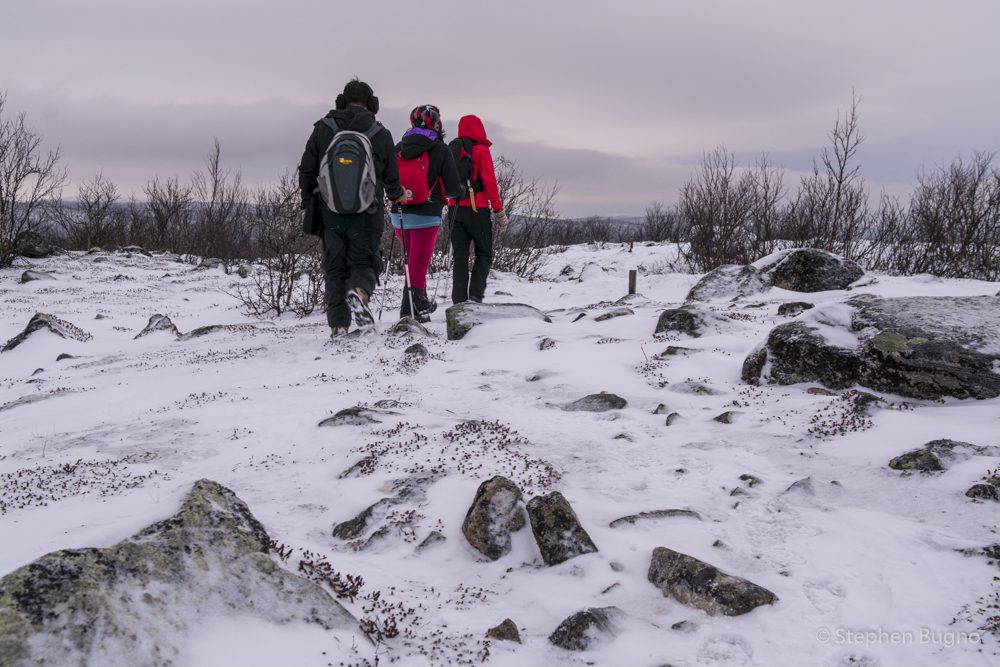 I love winter hiking. I don’t get a chance to go very often, but when I do, what’s immediately noticeable is the silence (besides the cold!). Right in the village of Utsjoki, there is a trail leading up to a pond at the top of the fell. There a small hut welcomes hikers in from the cold. A few minutes after starting a fire, the feeling returned to our hands and feet and we cooked some sausages over the open fire and drank hot tea. Normally in the winter, this short hike is done with snowshoes. But in November, the thin snow cover allowed us to walk in our hiking boots. 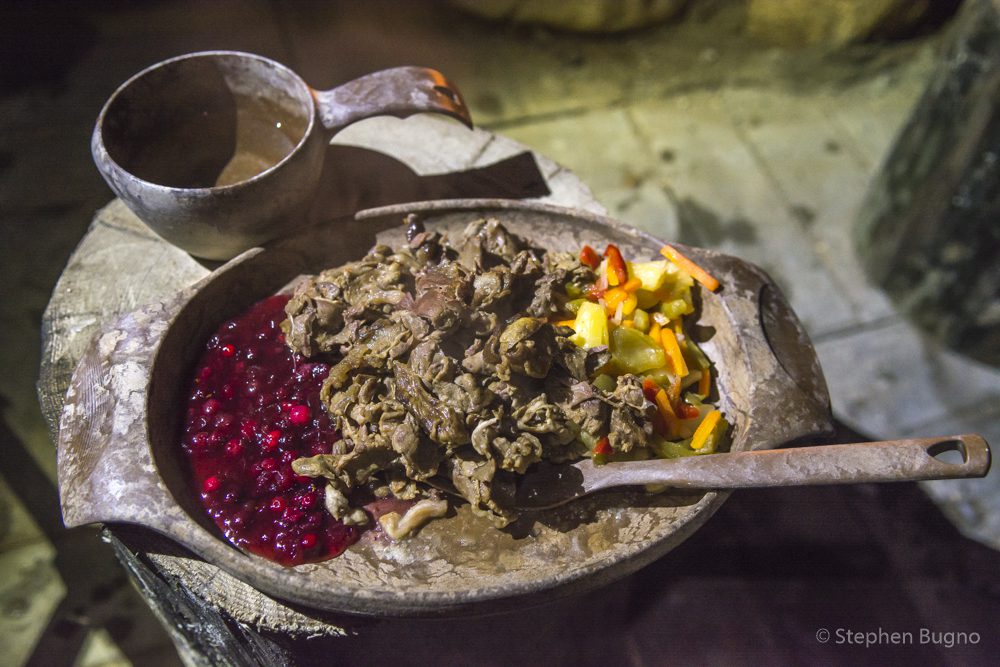 Before traveling to Lapland I was very curious about this ethnic group that spans this territory of the Arctic across Norway, Sweden, Finland, and Russia. They have a distinct culture and it was really interesting for me to chat with Sami reindeer herders, listen to Sami music, and eat traditional Sami foods. A good place to start is by visiting Siida – The National Museum of the Finnish Sami.  This will give you an excellent introduction to everything you every wanted to know about the Sami. A great follow-up activity is dinner with Henri. Right in Utsjoki, you can eat a traditional Sami feast and ask Henri everything you ever wanted to know about what it means to be Sami. Find him at Holiday Village Valle. 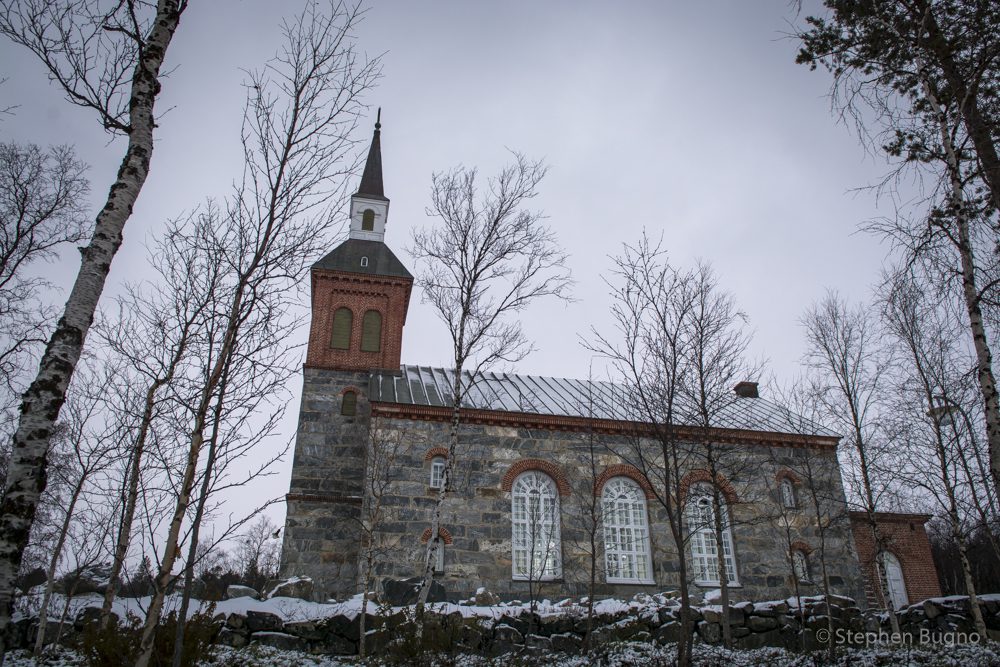 Utsjoki is set along the Tana River in the very north of Finland. It’s popular in summer with salmon fishermen and others who love the wilderness up in these parts. In winter, it’s all about the winter sports and northern lights. But there is also a little bit of history up here. Utsjoki Church was the only church once owned by the government (although in 2004 it was donated to the parishioners.) The story goes that it was funded by Nicholas I, Tsar of Russia. Why would he built a Lutheran Church in Finland? He wanted to gain the trust of the Finns. The Russians had just taken Finland from the Swedes by war. This and more history can be found six kilometers to the south of modern Utsjoki. This is where the original settlement sprung up. long isolated, it wasn’t until 1957 that the modern road came here from the south. About 13 houses made the original market place area and today these make up the Church Cottages, next to both the old and new churches. 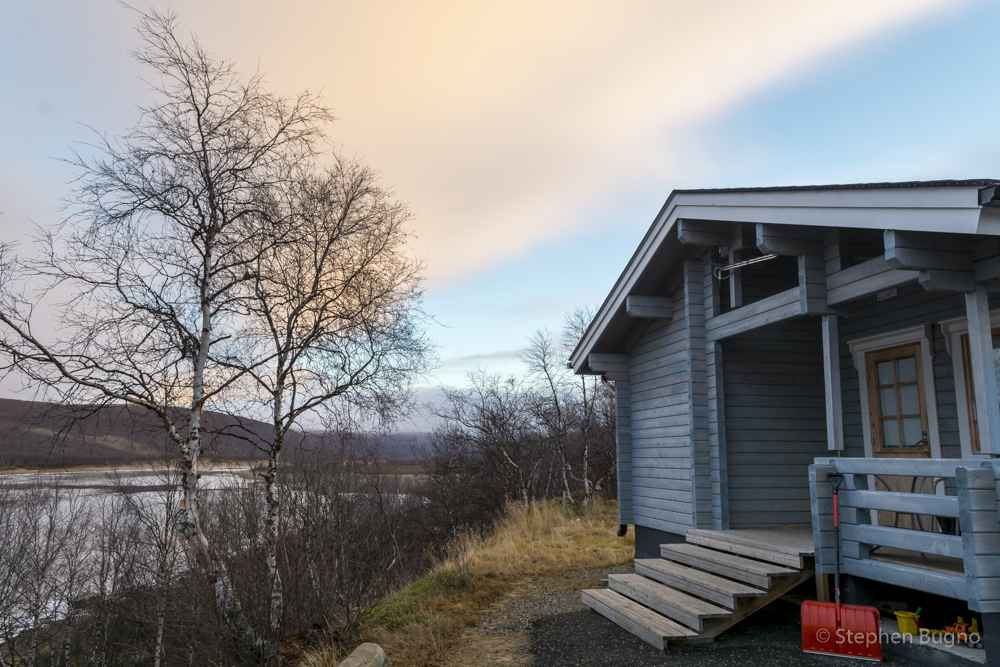 We visited northern Lapland with Aurora Holidays. They are a new company and they took really good care of us. By the end of the week we were sad to leave our new friends in the north. We traveled from Helsinki to Ivalo independently on Norwegian Airlines, but Finnair also flies the route. From that point we were in the hands of Tiina and Emilia and our adventures across Finland and Norway continued for the whole week. Our accommodation was in beautiful little cabins outfitted with kitchens and a sauna set peacefully on the bluff above the Tana River. 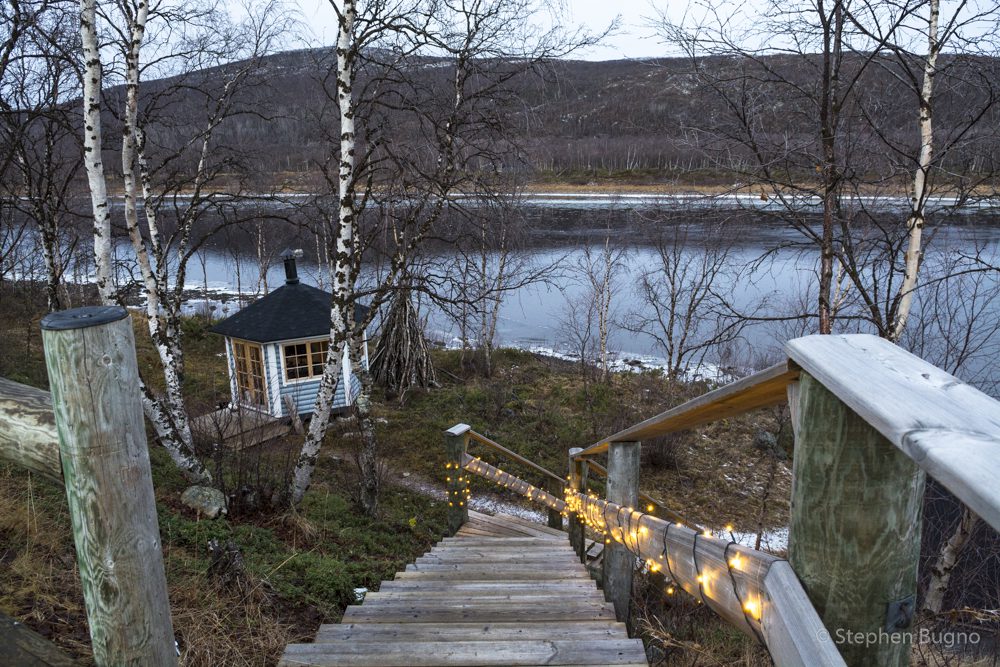 Have you ever seen the northern lights or gone dog mushing? Tell me about your experience in the comments below?