French Cuisine: Restaurants Not To Miss Out On In Paris 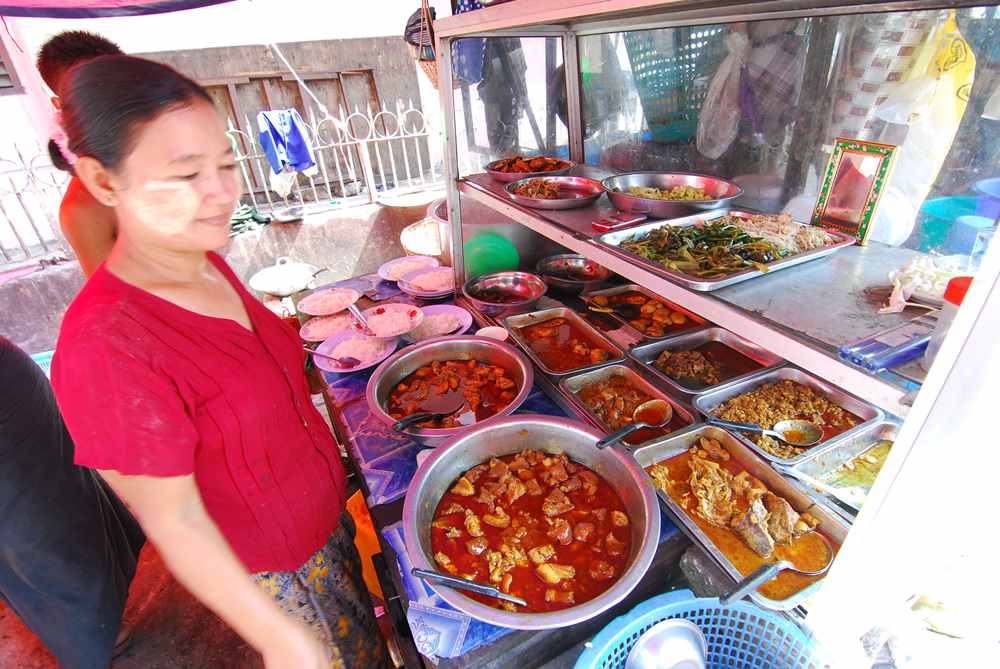 Sunset over the busy boat traffic of the Yangon River.

As I breezed through immigration and customs with my visa already in hand, it was hard not to notice: Myanmar is ready for tourism. They’ve made their visa easier to get, eased restrictions on barring journalists and writers,and normalized currency exchange. The international airport is modern and getting a taxi is organized and straightforward. Upon leaving the airport I immediately noticed one thing:

The airport is only about 12 km outside the city center. It must have taken me nearly two hours to get to my guesthouse in downtown Yangon. Granted, it was rush hour, but the volume of cars was high above its capacity. As we sat in the jam, the other American sharing the taxi pointed out a Honda hybrid next to us. It seemed unremarkable at the time, but serves as an example of an increase in foreign trade as of late. That isn’t the only change taking place. It’s my first time in Myanmar, so I have nothing with which to compare. But I’ve met a friend here, Dustin Main of A Skinny Escape, and it’s much like being around an old man who’s seen a lifetime of changes after waking from a deep sleep. Dustin’s been here about seven times, but only over the course of the past 2 ½ years. “That wasn’t here last time.” is a common phase I’m hearing. Last time was only six months ago.

Now there is a new fleet of buses complete with advertising of Red Bull and Japanese Enjoy Shampoo. Dustin is not impressed. But I asked a local Yangoner his opinion, and he seemed quite pleased. There are more ads now all around the city, but I can’t tell a difference. And if I were compare it to nearly any other city on earth, I’d say Yangon was hardly commercialized. 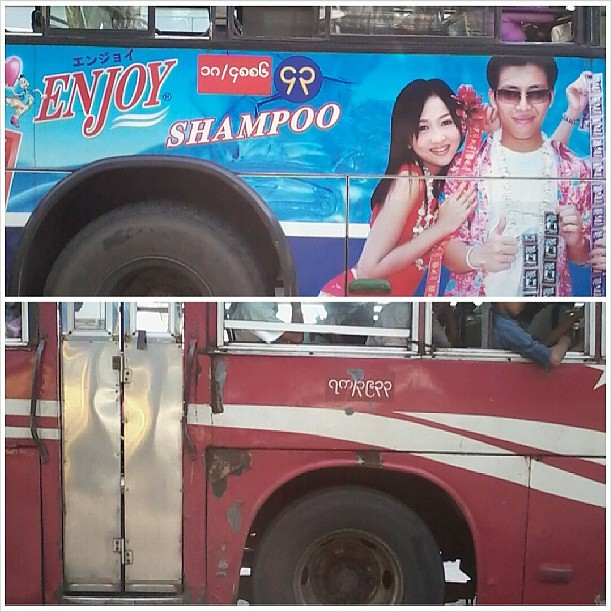 An old and new bus side by side.

I’ve only been in Yangon three days but I can’t get over how friendly everyone is. People we pass on the street are just sincerely happy to greet foreigners, glad that we’ve stopped for a street-side bowl of mohinga, the national dish, pleased to serve us a cup of tea at a teahouse. Those with enough English are eager to start up a conversation. Lots of smiles. Very easygoing people.

It’s a novelty today to travel to a country whose people don’t automatically switch to English when they see a foreigner. On many occasions we’ve had to use the Burmese phrasebook to work a situation out. It’s refreshing. And fun. Most individuals involved in tourism speak English well, but many others do not. 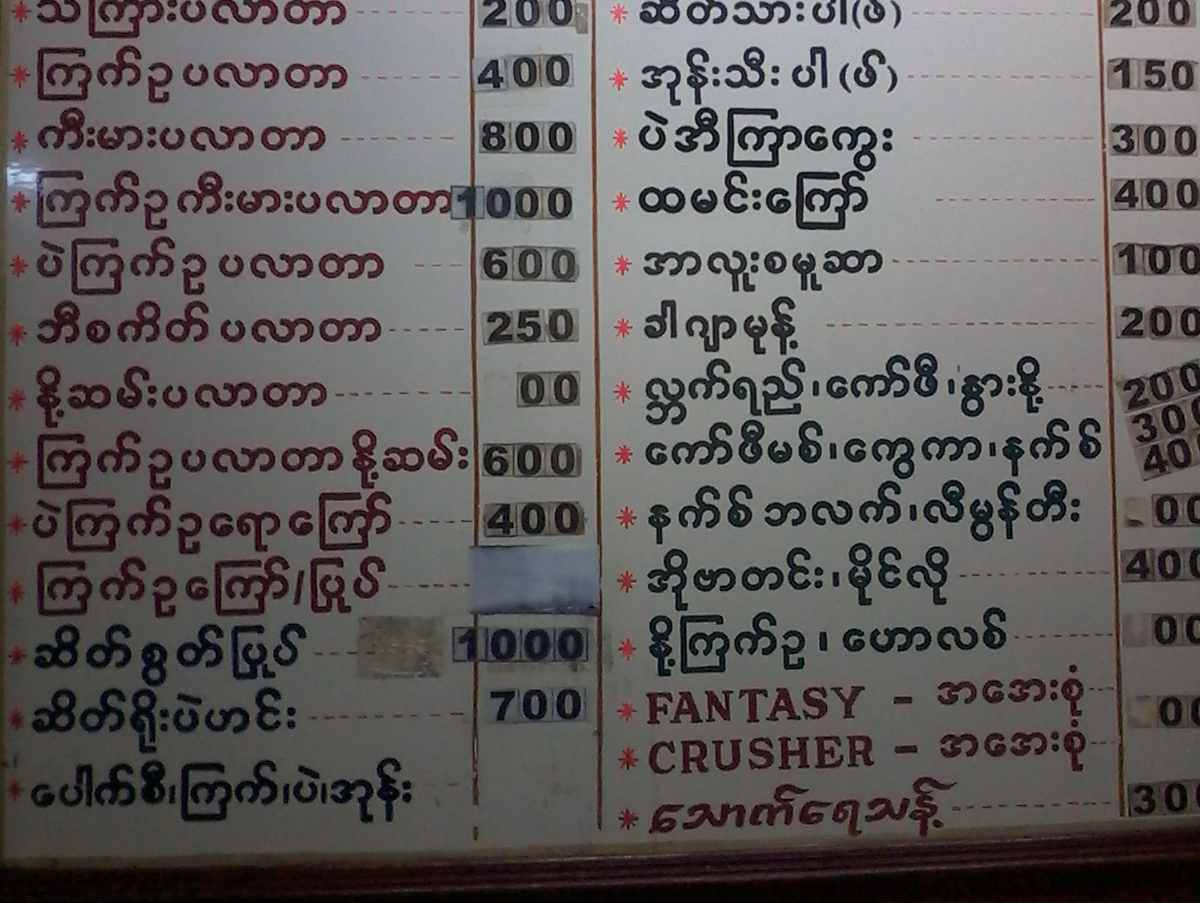 I get the impression that Myanmar is becoming an easier place for foreigners to travel. Distances are still great and infrastructure rudimentary in many places, but more tourists are arriving and travel is getting easier on the whole.

I’ve been loving the food in Myanmar so far. Local cuisine is easy to find and very inexpensive. The ubiquitous tea shops usually sell fried rice and noodles which provide sustenance in a pinch. Rather look for the street hawkers, cafes, or restaurants which serve a variety of vegetable, meat, and fish dishes alongside steamed rice. For breakfast I’ve been enjoying the de-facto national dish, mohinga, every morning from the sidewalk food carts…Which brings me to one final point.

A woman dishes out delicious Burmese food from her hawker stall.

Life on the streets

Pull up a mini plastic chair and order a bowl of noodles. Sit at a tea shop where more little plastic chairs and tables spill out from shaded alley ways on to street sides. Market vendors line the major streets of downtown Yangon selling items from socks and underwear to kitchen utensils. More vendors sell fruit, deep fried desserts, and Indian snacks like samosas. When the temperatures cool, the night market comes alive when you can try durian, a variety of fried snacks, or even something more exotic like cicadas. My point is, there is a lot of activity on the streets of Yangon, and if you want to experience the best of the city, that’s where you want to be.

I’m looking forward to the rest of my travels through Myanmar. Have you been?