14 Things to do in Singapore 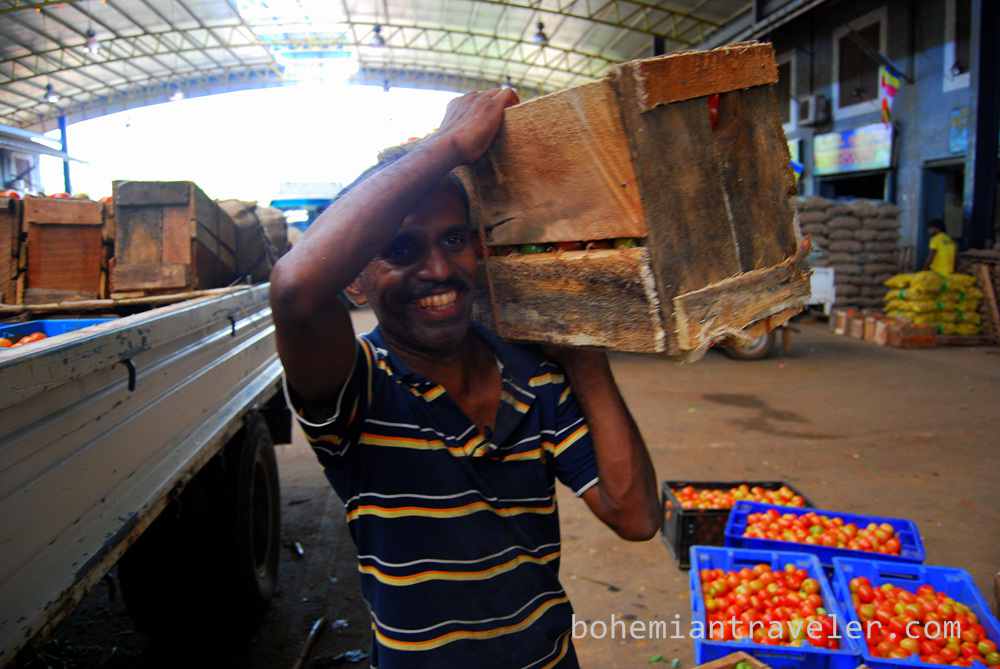 Tourists don’t normally enter the Dambulla wholesale produce market. There isn’t anything there to buy. It’s just a bunch of guys loading and unloading fruit and vegetables from different regions of Sri Lanka. Others, in shirts and ties, sit in the one-room offices located to the side. The whole place is unattractive, resembling three aircraft hangers butted up together.

This is exactly why I went there.

I like sights and tourist attractions, don’t get me wrong. But occasionally, I leave with an empty feeling—the feeling that I made no personal connection.

Wholesalers trading produce at a market in Sri Lanka.

I like normal (consumer) markets a lot. Even if I don’t need to buy anything, they are still a worthwhile place to look around and learn about a place. Buying fruit and other food is a necessity for travelers and a good way to interact with vendors and try your hand at bargaining.

Wholesale markets are different. There’s nothing for sale for regular consumers.

One serious-looking buyer (or seller) stopped what he was doing and approached me. After asking where I was from he posed this question to me: “What is different about this wholesale market from one in your country?”

Unloading vegetables from a truck.

“Well, umm, I don’t really go to wholesale produce markets in my own country. So I don’t know what they’re like.”

But I said I thought that everything was packaged into boxes and loaded into bigger trucks.

He admitted that was one of their problems. Produce here gets damaged because it’s not shipped properly.

Lots of bananas were sitting around, along with piles of coconuts, truckloads of sweet potatoes, crates of tomatoes, papayas, and even dried fish. We were several hours from the coast.

“Where is it from?” I asked the man, who was happy to lift up a few of the salted fish to show me.

“From Jaffna, in the north.” Jaffna is a Tamil-majority city, which suffered much during the civil war.

A man shows me dried fish from Jaffna.

Inquiring about the origin of each product was typically my ice-breaker with these buyers, sellers, drivers, and unloaders. Not that I needed one. An American and a Korean walking into a market create enough attention simply by their being. Even people who were occupied, stopped what they were doing to inquire who we were and where we were from.

The problem with typical tourism

A tourist typically only interacts with those in the tourism industry—hoteliers, tuk-tuk drivers, servers in restaurants—all people in the service industry. Many of these people are friendly. Most want your business. A few—mostly the tuk-tuk drivers—are annoying, and occasionally aggressive and dishonest. These interactions may leave the foreigner with a tired outlook of the country.

Guys having a laugh at Dambulla wholesale market in Sri Lanka.

Stepping into a wholesale market puts the traveler in contact with a bunch of ordinary people—workers on the job—who have no agenda except making a new friend and some brief conversation.

Except…a few of these traders and workers went beyond that. They gave us a free sample of whatever it was they were dealing. They were proud of their produce and were happy to meet us. And we could say the same about them. It was a refreshing change of pace from the typical tourist trail.

We returned back to our guesthouse with a random assortment of fruit and veggies.

Bunches of bananas wait to be sold off.

A pile of coconuts. 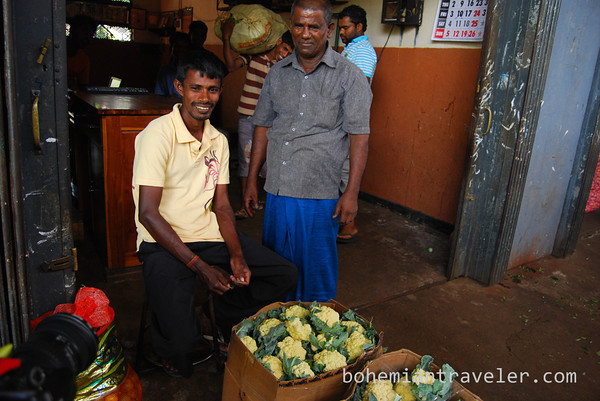 A vendor with cauliflower.

A cart of papayas at the Dambulla wholesale market.

Showing off their tomatoes, before giving us a couple to try.