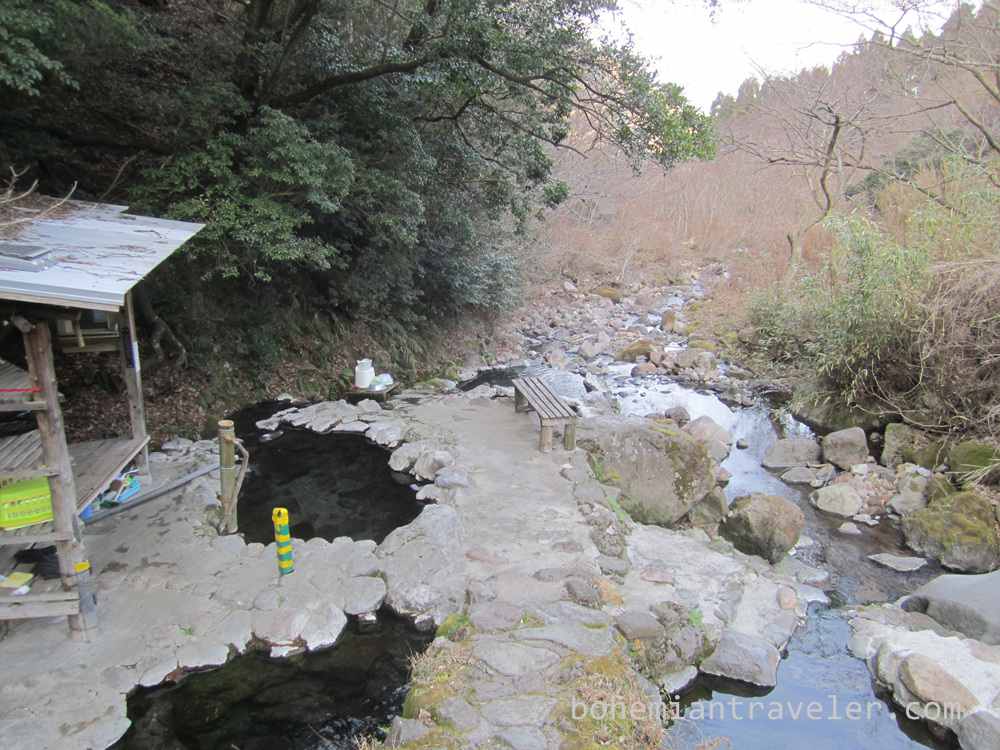 There are onsen for everybody in Beppu: mud baths, sand baths, and the typical mineral water baths. Onsen is the Japanese word for hot springs. Normally bathing facilities are built around the water source, or there is a ryokan, a traditional Japanese Inn. Stretching throughout the island nation, these onsen play a crucial role in domestic tourism.

A view of Hebin yu onsen, above Beppu Japan

More infrequently, the hot water bubbles out of the ground and there is no inn, buildings, or entrance fees. These were the onsen I was looking for. My guidebook gave me a vague description of the location of the hidden onsen in Beppu. From the tourism information office at the train station, I picked up a more detailed, hand-drawn map.

From the station I took a bus about 30 minutes up to the Myoban area. Here, there are several established onsen with entrance fees between 300-1500 yen. Instead, I left. I walked up a one-lane road, twisting up the hill side. I was searching for Hebin-yu, one of the three so-called “hidden” onsen. 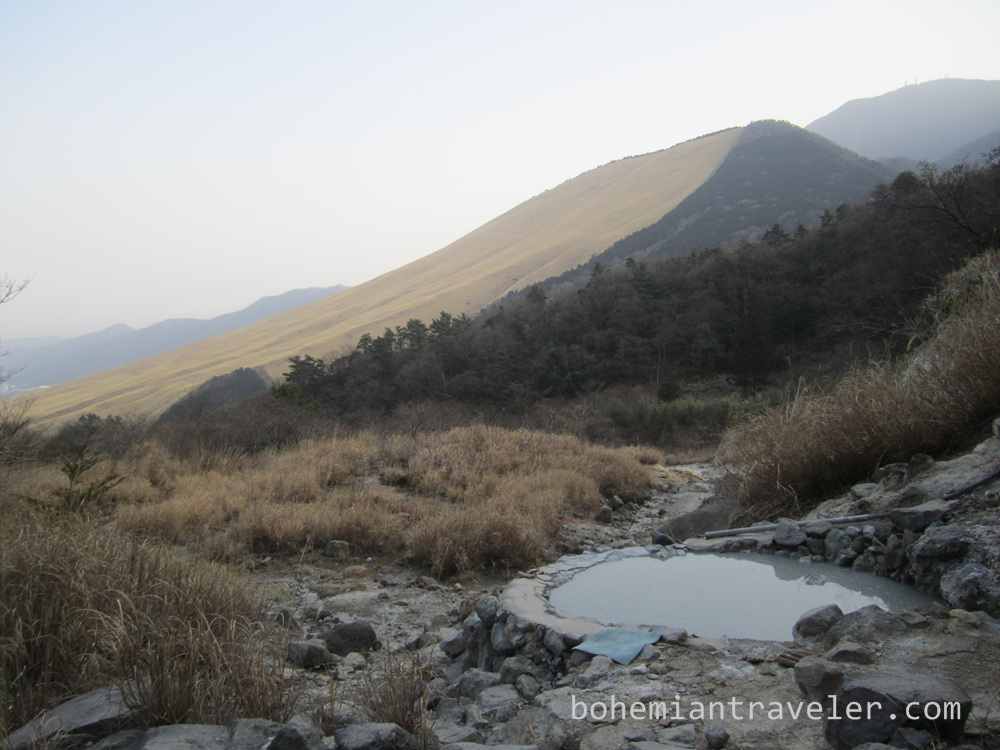 The view of Beppu from Nabeyyama no yu onsen.

Halfway up I grew concerned by the big sign posted in Japanese and English: “Beware: A serious crime has been committed here. Do not enter here alone, or at night, especially women take precaution.” I was alone. And it was getting towards evening time. Should I have been concerned? I was in one of the safest countries on earth.

After forty minutes walking, I found Hebin-yu onsen nestled in little valley with a creek running through it. A little wooden changing hut stood next to the man-made rock pools. A man sat soaking in the water. The hillside was forested and the sound of the creek was a welcomed change of pace from Japan’s urban life. 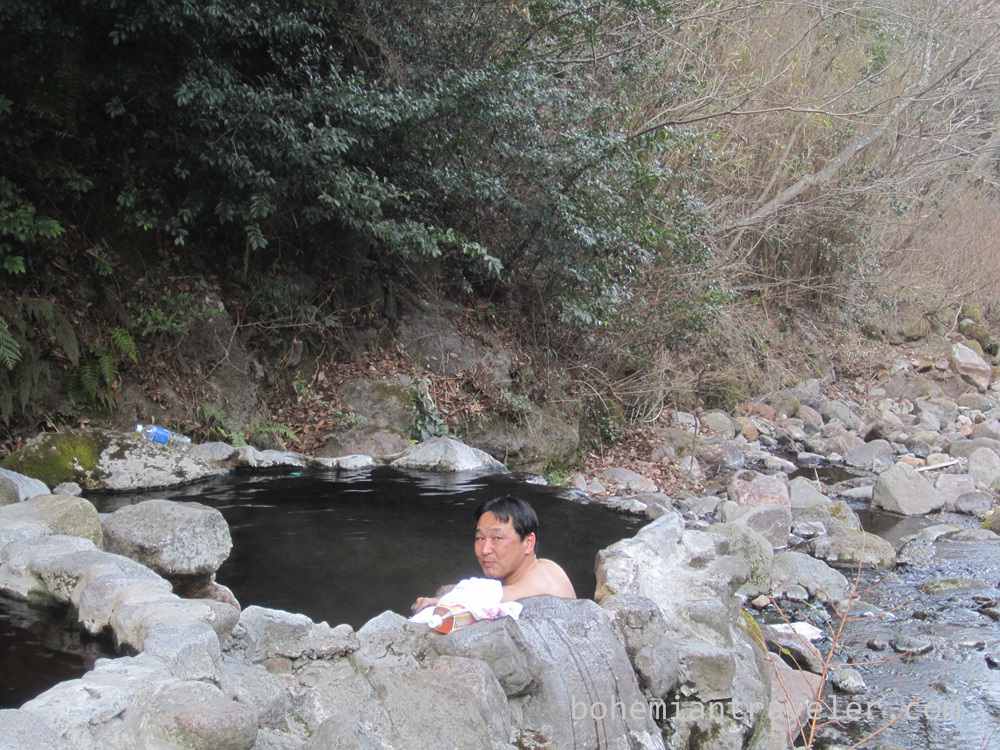 Soaking in Hebin yu onsen, one of the hidden onsen of Beppu Japan

The man in the onsen struck up a conversation with me, surprised that I had found the place on my own. Most, like him, drive up. I, on the other hand was more concerned with the serious crime. “It’s safe now.” He told me. “Two years ago a woman was murdered over at Nabeyama-no-yu (the other onsen).” Two years later, police are still cautioning visitors, even after the criminal has been apprehended.

We continue chatting. After my new onsen friend heard that I was writing a story about Beppu’s hot springs, he practically jumped out of the steaming water with excitement. Still half-wet, he was eager to show me the other two hidden onsen before it got dark.

In his little Honda Fit, we bumped and shook our way up the gravel road to Nabeyama-no-yu. Nabeyama-no-yu has officially been closed since the murder, but locals still use it. We saw two teenagers coming down as we trekked up the final 200 meters by foot. There, steam is billowing out from the hillside. The rocks are tinged yellow. The smell of sulfur burned my nostrils. Nabeyama-no-yu is known for its mud baths and great views of Buppu, far in the distance. We didn’t bathe here. Instead, I got a few pictures and we got back into the car. 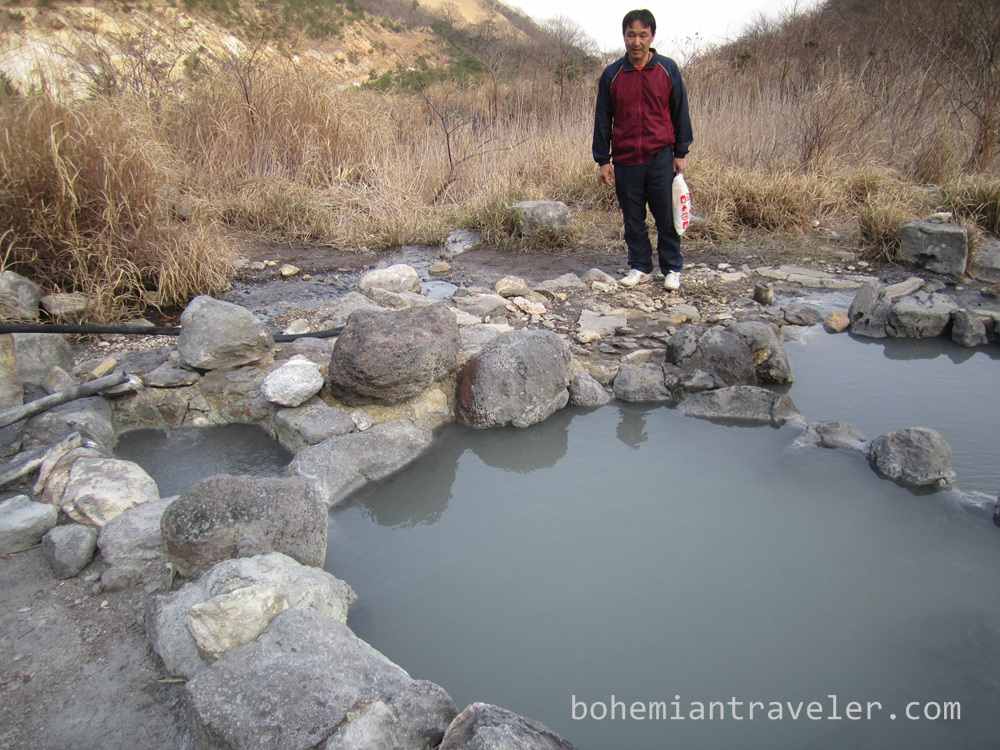 The milky muddy waters of Nabeyyama no yu onsen.

Even though Tsuru-no-yu Onsen is visible down in the valley below, the road snakes all the way around. At Tsuru-no-yu, there are more people. These baths appear to be a hangout for the local retired guys. Even so, they welcomed me. A few of them even spoke English quite well. There, a young guy in black pulled up on a motorcycle with his sleeping bag and mat lashed on the back. He was on a two-week trip around his country after graduating university. Soaking in the water, I wondered what was next for him. “I’ll become a Salaryman.” He told me. 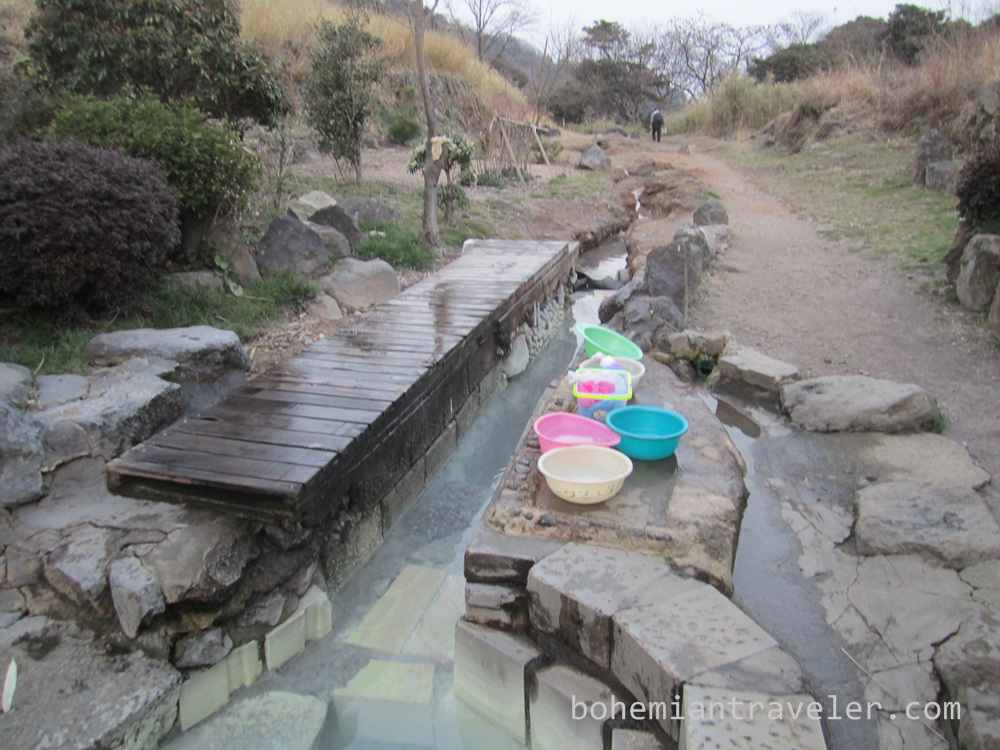 The onsen of Tsuru no yu, the local hangout for the retired guys.

These pools are the hottest of Beppu’s onsen and a couple nice open-air bathing pools have been constructed. Close to where the water drains, men wash, shampoo and shave. Some relax. One regular told me he used to work in New York for ANA years ago but that his English is rusty. He explained the water level was a little low because of the lack of rain. So he’s constructed a makeshift dam to retain more water. 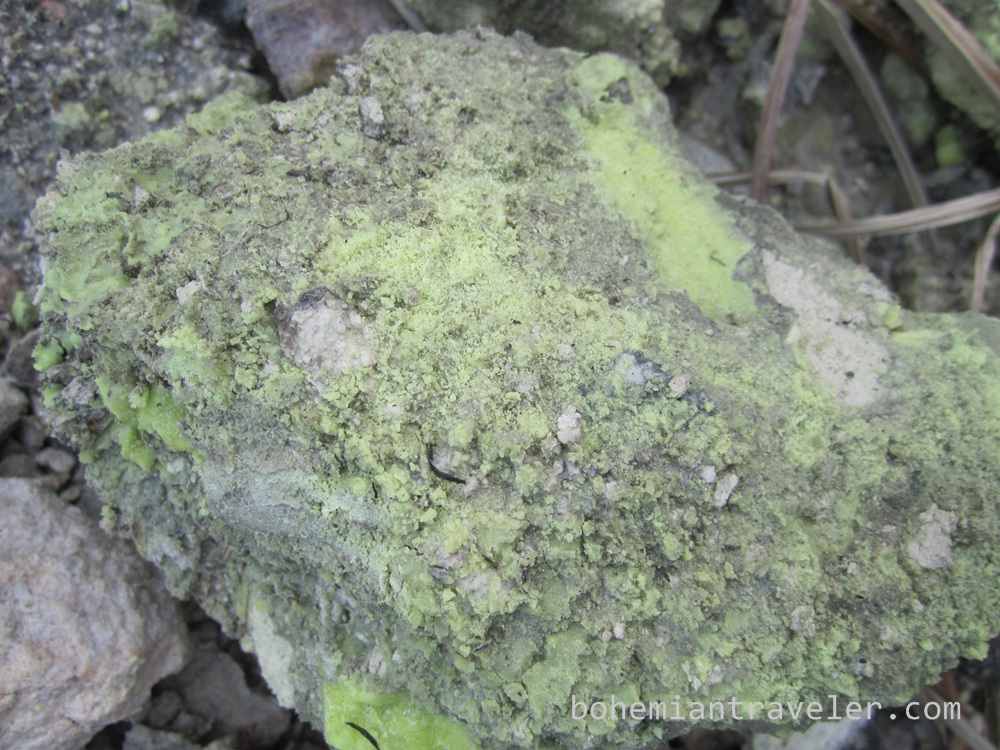 The yellow rocks around Nabeyyama no yu Onsen.

Beppu is known as Japan’s onsen capital. It’s located on the northeast shore of Kyushu. It attracts millions of tourists to its resorts, but also has an appeal to independent travelers. Indie travelers are so few, that the city does feel in a way underappreciated, at least in the in the downtown, a few miles from the resorts.

The Beppu tourist information office at the train station gives out free information. Get their hand-drawn detailed map of the Myoban Area and its hidden hot springs.

Spa Khaosan Beppu Hostel has the same maps and is also a good source of information and an excellent place to base yourself while in Beppu. They’ve got cheap beds and a helpful staff. It’s also a good place to meet fellow travelers. It might be a good idea, especially for solo-female travelers, to go with another person or a small group up to the hidden onsen. Even though locals say it’s safe, there are many warning signs from the police department. But it shouldn’t deter you from visiting. For more info on Spa Khaosan Beppu Hostel, check their website:  http://www.khaosan-tokyo.com/en/beppu/ And they have an onsen right in their hostel which is a great fun! 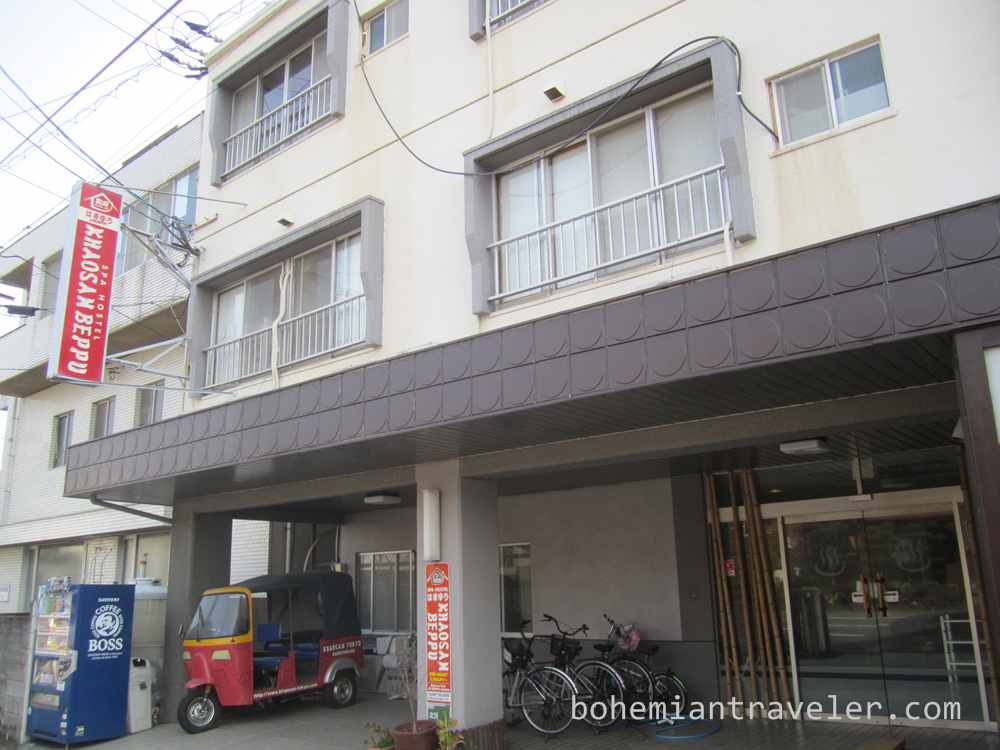 Khaosan Hostel Beppu, a great place to base yourself while visiting Beppu.