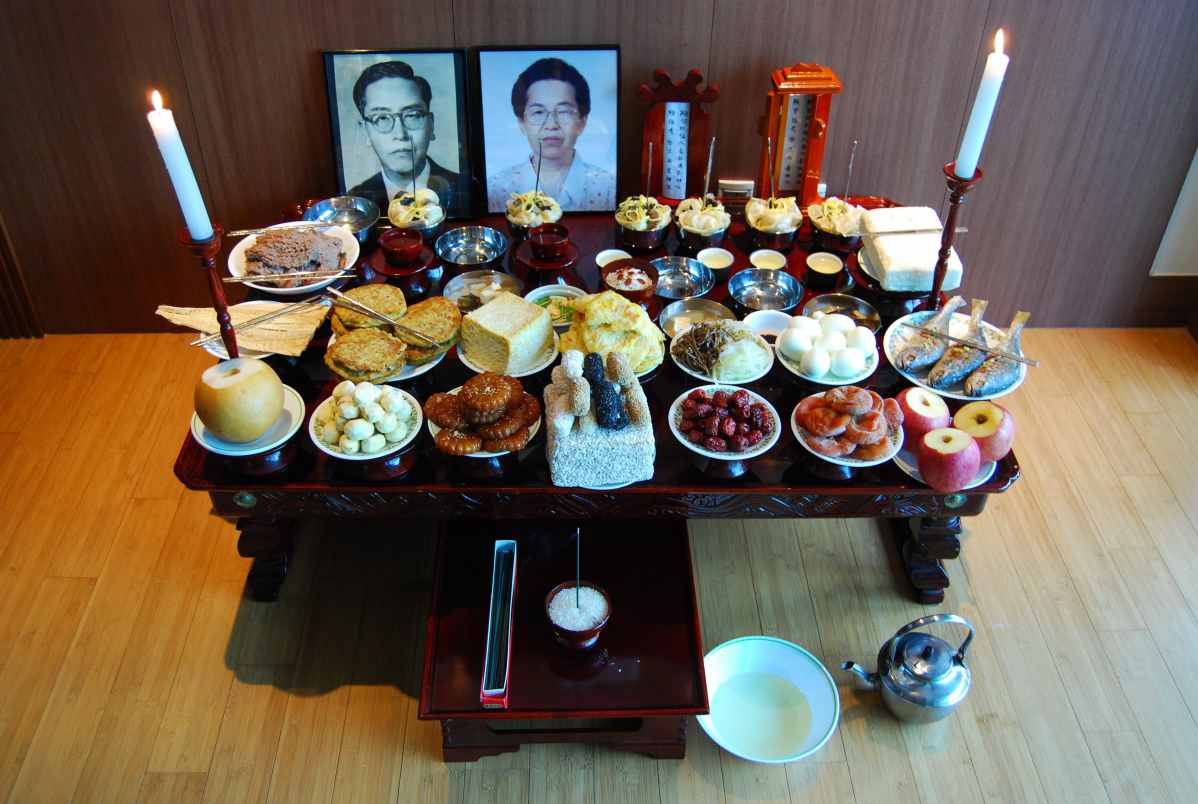 The offering set up to the ancestors for Korean Lunar New Year.

Two months ago, I thought I might be in South Africa during February. As it turned out, I was invited to Korea to spend the Lunar New Year holiday. It is one of the two most important Korean holidays and I’m fortunate to have spent it with a Korean family.

This year, Lunar New Year fell on February 10th. Early that morning, the first thing we did was prepare the offering to the ancestors. We stayed at Juno’s apartment because her father is the oldest son and it is his duty to offer this ceremony on the Lunar New Year. The younger male siblings should come to his house for this ritual and any sisters may come anytime during the remainder of New Year’s Day to pay their respects and visit the family.

After the low table was set up against the wall, each of the foods was carried out from the kitchen one by one. Photographs of Juno’s paternal grandparents were raised along with their names written in Chinese calligraphy. The placement of the foods on the table is important. White foods will go on the west side, red ones in the east, smaller dishes on the front, and main foods like meat and fish near the back. The ancestor’s favorite meal will be placed near their photographs. 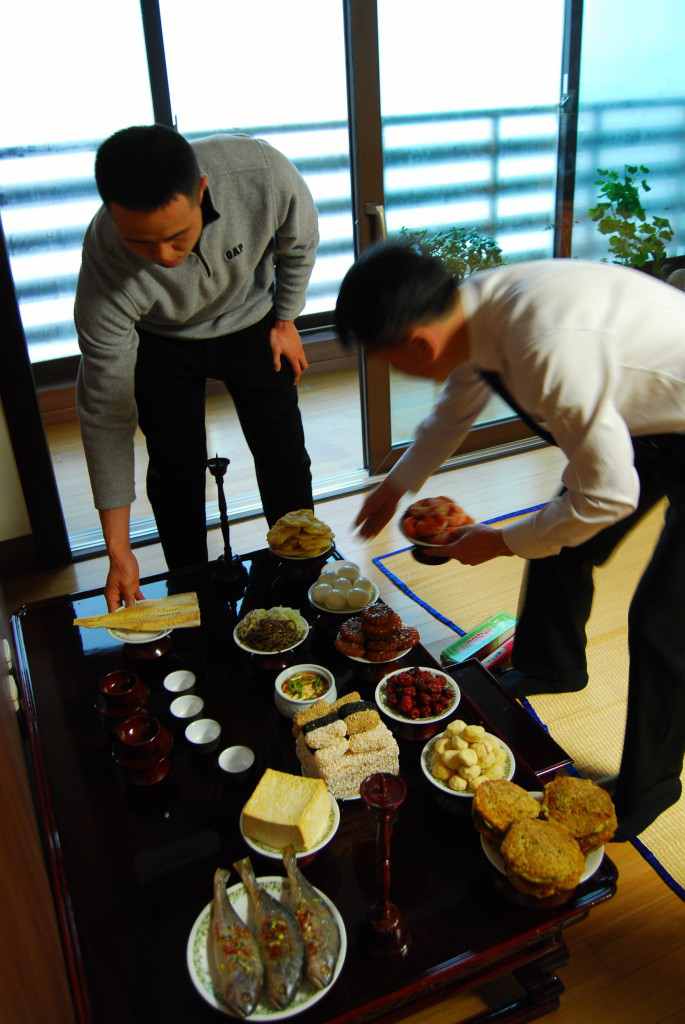 Setting up for the Lunar New Year.

Candles and incense are then lit. The doors are cracked to allow the spirits in. The men of the family poured rice wine into little cups and held it over the incense before offering it to the ancestors and dumping it. The rest of us watched.

Then the living family members kowtow 2 ½ times in succession. After the ancestral respects were paid, the temporary shrine was dismantled and it was our turn to pay our respects to the living elders. We kowtowed to Juno’s parents and then her Aunt and Uncle. It is customary for the elders to present the youngsters with cash gifts.

Our preparations the day before 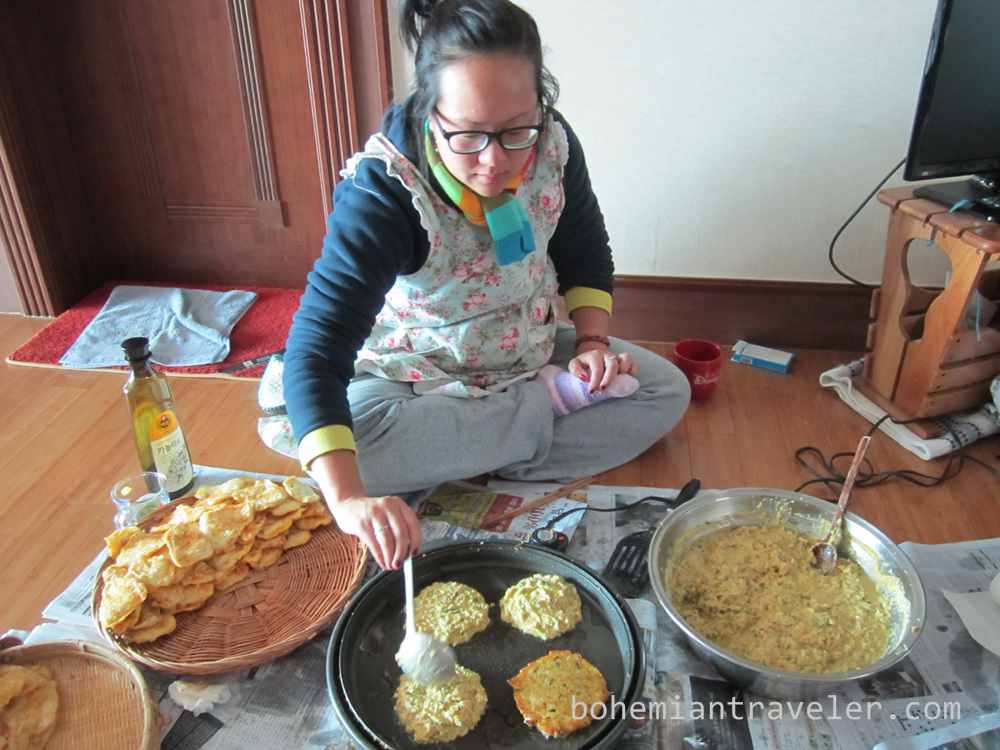 The day before, much of the food had been prepared. Juno’s mom was in charge of fixing all the dishes. She divvied some of the tasks to Juno and me and I was really happy to be involved. For Lunar New Year, much of the food is fried. It was my job to coat the fish fillets with flour and dip them into the egg coating. Juno fried the fish on a griddle set up in the middle of the floor. Newspapers were spread out below to catch the splashing oil.

After the fish we fried pancakes made of freshly ground mung bean, pork, and bean sprouts as well as little blocks of tofu. Juno’s mom finished up the remainder of the food. Most of the side dishes she had already prepared earlier in the week: cabbage and radish kimchi, sautéed bean sprouts and ferns, marinated sesame leaves, and lotus root in soy sauce.

After the ceremonies, the table was set for eating. Men sat at one end, women at the other. In Korea, there are many dishes in the center of the table. Each person has their own bowl of soup and takes from the communal bowls with their chopsticks. Usually, everyone has their own bowl of rice too, but for New Year’s we had soup which contained dok, or rice cakes. Even though it was only 8:30 in the morning we drank a little bit of rice wine because we had used it in the ceremony.

After we ate, we spent the rest of the morning playing with the kids and sitting around the living room. After the guests left, most of us fell asleep having been tired from waking so early that morning. 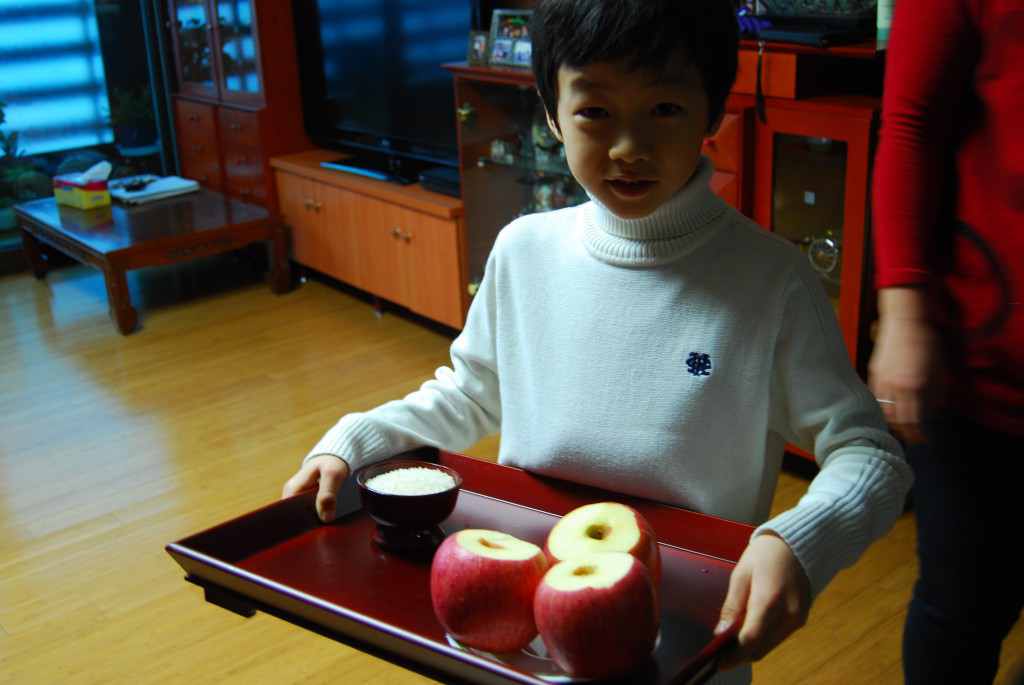 Thanks so much to Juno’s family for sharing their holiday and tradition with me! It was a beautiful day and quite different from the Korean Lunar New Year on Jeju Island I witnessed in 2011.