A walk around Milan Monumental Cemetery

The Beauty of Florence [in Photos] 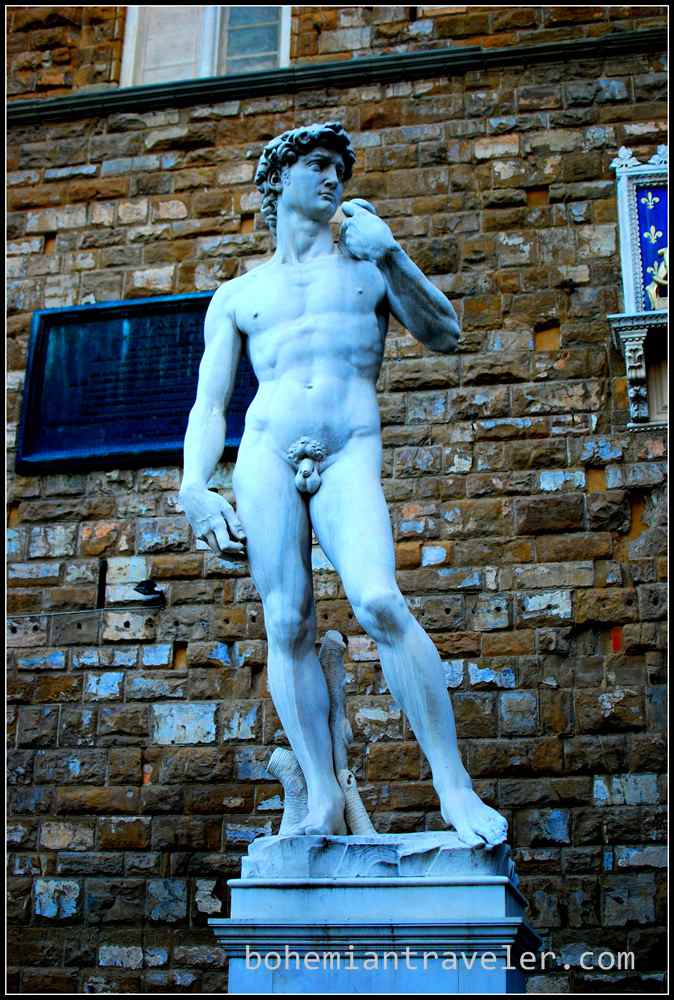 Warning: the following is a guest post by a Renaissance pigeon. All opinions expressed are his own and not Bohemian Traveler’s.

The true story of why they moved Michelangelo’s David inside

I want to tell you a story. The story of David and the real reason they moved him. You see, Michelangelo’s David is the most famous statue in the world. But to me, he was much, much more.

That I will get to later. First I want to tell you why David became such a famous statue. I recently tagged along on a Walks of Italy’s Florence City Stroll tour. It wasn’t so much a stroll for me. I just flew from site to site, following the group. I’m not sure if the tour guide noticed me or not.

It’s true; Michelangelo is the greatest sculptor the world has ever seen. Everything he touched was perfection. This fact has been passed down from generation to generation among us Florentine pigeons.

Now, more about David. One thing you might notice is David’s imperfect proportions. He has an abnormally huge head, hands, and feet. What was Michelangelo thinking when he did this? One theory suggests it was for the important parts to be seen from far away. David was originally planned to stand atop the cathedral. You could debate these theories for hours or you could simply settle on the fact that David weighs six tons and he had to be balanced in order to stand on his own. Not an easy task.

What more about the anatomy? Well, it’s perfect. Michelangelo used to dissect cadavers so he had a complete understanding of the details of the human body: the muscles, the tendons, the veins. These details are so precise, so faultless on David.

Look how the tendons in David’s neck stand out tautly, as if he is tense and readying for combat. How about the veins bulging out of his lowered right hand or his furrowed brow? Who else get these details in marble better than Michelangelo?

Michelangelo’s David interpreted by me, a Renaissance pigeon.

This sculpture of David by Michelangelo was the first of 400 or so Davids presenting him without a sword or scull. Why is this important? Because we’re not sure who he is at first glance.

Let’s look at some clues. First, David is nude. In the Renaissance period, this means one of two things: the statue is a god or it is a boy. Hmmm. I’ll say a boy. But we still don’t know it’s David.

As we stood in the Accademia viewing David from the front, I overheard the tour guide asking, “Would you bet your life that that is a rock and sling in his hands?” Well, I “think” it’s a rock and a sling, what David used to kill Goliath, but I’m not 100% sure. I wouldn’t bet my short little pigeon life on it.

This is what forces us to go behind David. In earlier versions of David we could see him holding a sword or the scull of Goliath dangling from his grip, or under his boot—a clear sign of who the statue was.

So we went behind David to investigate further. It is a rock and sling! Pretty clever of Michelangelo to oblige us to move around to see the entire statue. I think this is part of the reason Michelangelo preferred working in the three-dimensional medium of sculpture rather than painting.

The statue also makes us think about when it took place. Many-a-times I sat on David’s head and wondered about that concerned look on his face. Did he already kill Goliath? I would think to myself. Then I realized this David, unlike others, is from a moment before killing Goliath. Is this boy up for the task? His eyes seem to be focused intently on something in the distance. I think he can do it!

When they moved David

For 369 years David stood outside the entrance to the Palazzo Vecchio, in Florence’s Piazza della Signoria. Then the new government moved David to the Accademia Gallery. It is widely believed that David was moved in order to protect him from the elements; that the wind, sun, and rain would deteriorate him.

The Real Reason they moved David

The tour guide at Walks of Italy told me that the real reason was because of money. Now, of this, I was also skeptical. But he explained that this new Kingdom of Italy could now charge people admission in order to see David. This would create a great revenue stream.

Before this point David just stood outside in the piazza where any old pigeon or human could gaze upon his perfection for free. Now the Accademia charges €11 (or with advance booking: €15) for entry!

The real real reason they moved David is because of the high acidic content of my guano. David’s hair started to corrode and these people from the new Kingdom of Italy didn’t like that, so they took our David away from our beloved Piazza della Signoria.

David, you see, was my, how do I say this? …my favorite place to, you know…David was my favorite toilet.

As I said, I have good taste. I shit on masterpieces.

This pigeon wishes to thank Walks of Italy for the allowing him to observe one their tours from above.

Why do YOU think they moved David inside?