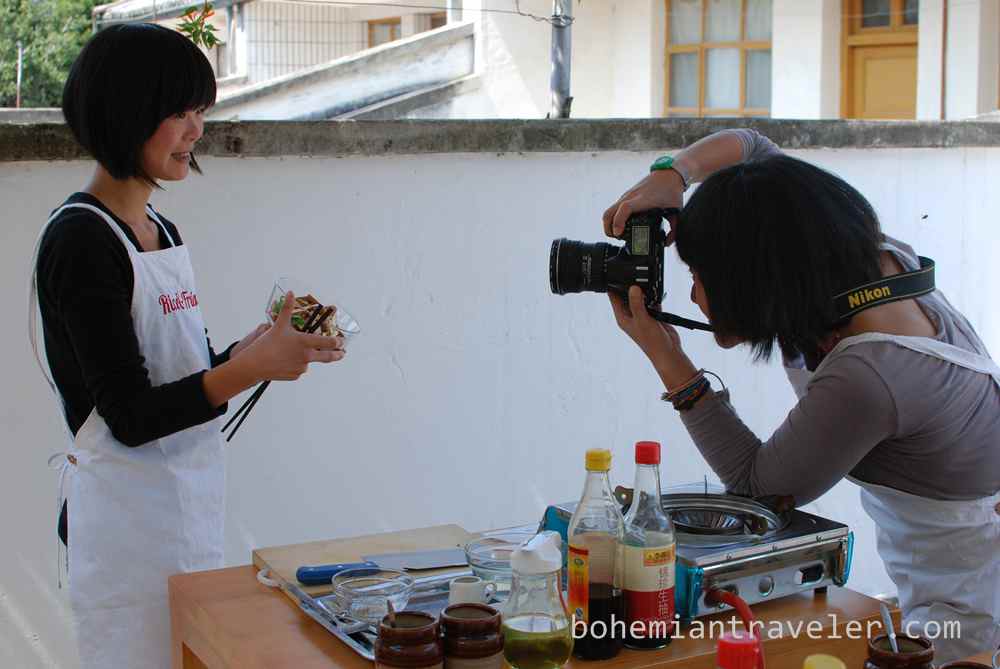 I had a really great opportunity in Dali, China to check out the Rice and Friends Cooking School. They just moved to a new location and it was the day before the start of their new season. The owner, Luxi, was really excited to show my travel partner and me around and take us through her half-day course.

We met Luxi at 10 am in the Old City of Dali and went straight to the market. She pointed out the produce that is unique to this area of Yunnan Province like sea veg, a plant grows in the nearby Erhai Lake. There were also lots of varieties of tofu: the most odd being stinky tofu. It’s fermented and you can see a layer of mold growing on the top of it. (When it is being cooked and served on the street, it smells like the rotting carcass of an animal.)  Luxi compared it to blue cheese. Also on sale were some distinctive varieties of sprouts. Mushrooms are also plentiful in Yunnan. 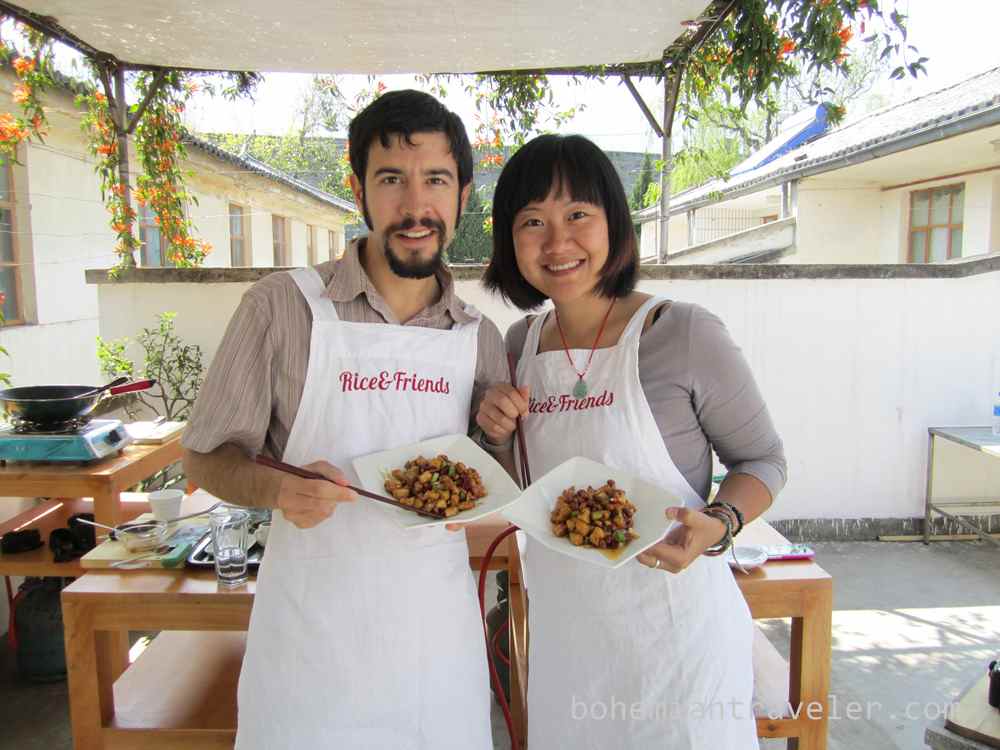 Stephen and Juno at Rice and Friends Cooking School.

Back at the Cooking Studio

Following the town market, we lugged all the fresh veggies back to the cooking school. Rice and Friends is now located in the west part of the old city, inside the old walls. The moveable stove-stations are parked on the second story of an open-air porch. The view west is clear: the staggeringly impressive Cang shan mountains piercing the sky.

Luxi and her assistant had already prepared some of the ingredients as well as the meat to be used. We would be cooking three different dishes today. In the past she has used this repertoire of dishes, but she hopes to mix it up in the coming year. 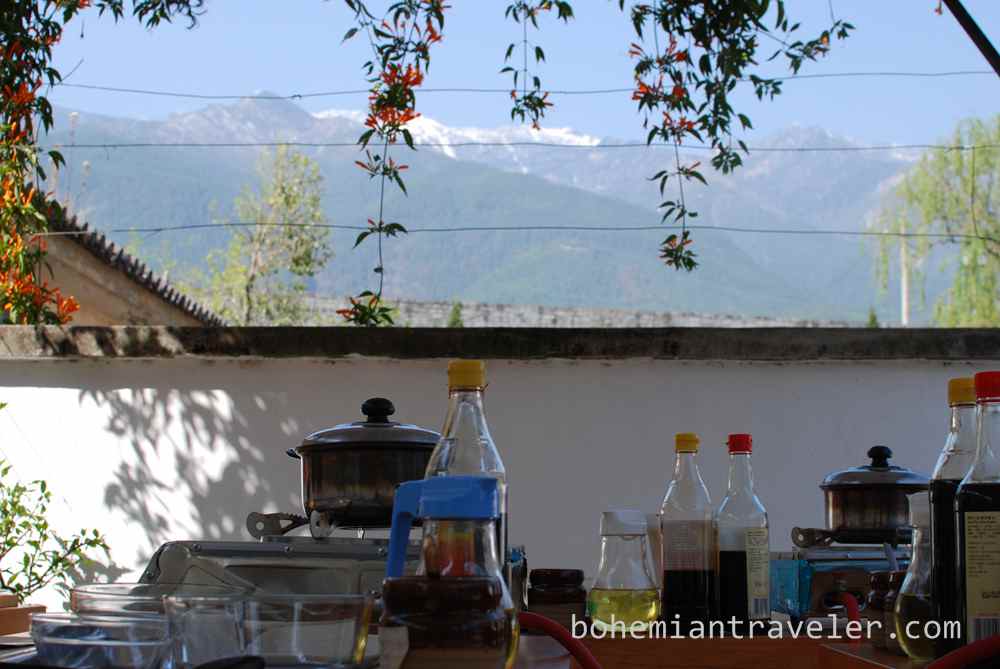 There were three dishes planned for the day: Dried Tofu Salad, Fish-flavored eggplant, and Kung Pao Chicken. We started with the salad and ate it up as soon as we finished. We followed that up with the eggplant and chicken dishes, which were fantastic. As we ate, we talked about the history of the dishes and about many of the day’s ingrediants.

The Kung Pao Chicken originates from the Sichuan Cooking School of China. Interestingly enough, the fish-flavored eggplant contains no fish—it was named so because it used to contain fish but someone made it one time without the fish and they liked it just as much. 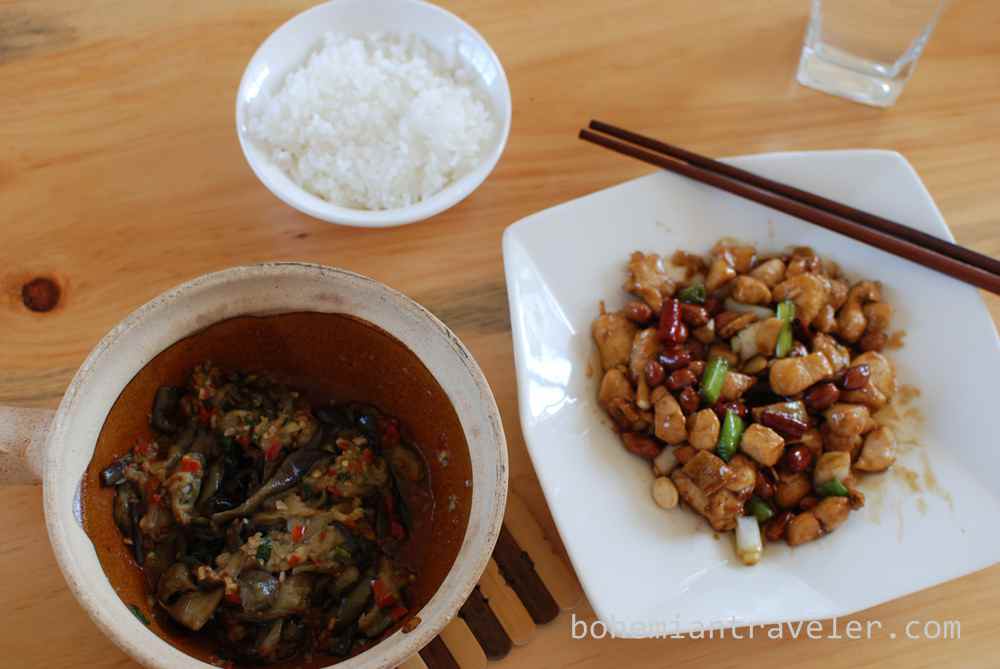 Luxi originally hails from Sichuan Province and grew up learning a variety dishes from the various Chinese cooking schools from her mother. When she moved to Shanghai after university she further diversified her culinary knowledge. She is not only a passionate teacher and cook, but also a traveler—so she relates well with foreigners that are far from home.

One of her goals for her classes is to teach Chinese recipes that can be replicated back home. She spent much of last year in Germany and the rest of Europe scouring Asian supermarkets to make sure her students could find the ingredients back in their home countries. I thought that was especially important. You want to be able to return home, not only with the new cooking skills, but also the peace of mind that you won’t be searching for sub-standard replacements. Luxi also sends you off with a personal recipe book of the day’s dishes. 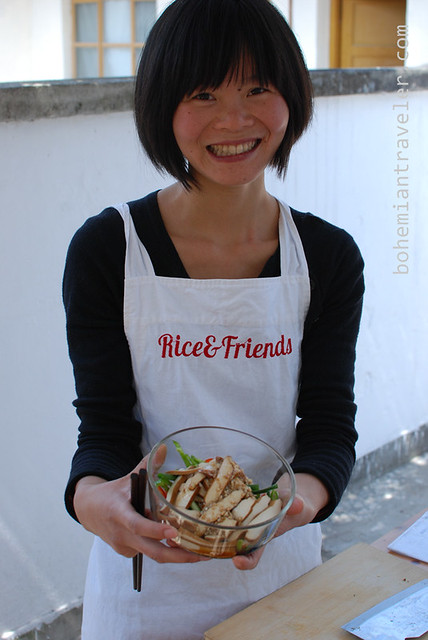 Lessons at Rice and Friends Cooking School are conducted daily from 10am-3pm. Classes are conducted with 5 or fewer students. Visit their website at: http://www.riceandfriends.com