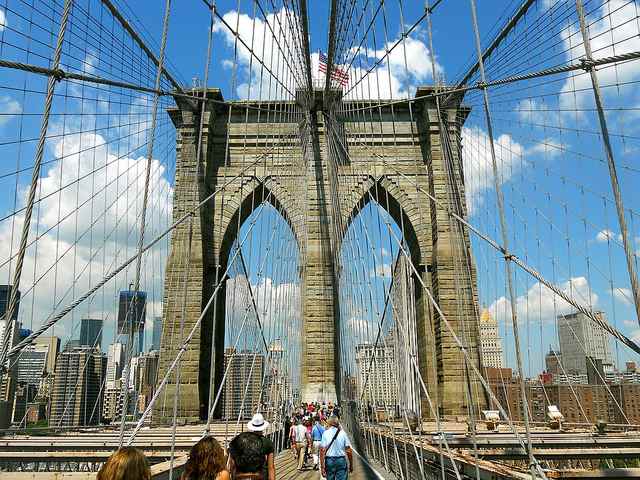 New York City is one of the world’s most exciting destinations.  It can also be one of the most expensive, with an “average” daily hotel rate of $276, and dinner at Masa restaurant going for $585. But there are plenty of bargains that make NYC affordable.

The holiday season (late November – New Year’s) is a festive time to visit, but the city is very crowded and prices soar.  Flights to New York are more expensive, hotel rates go through the roof, and few discounts are available.  However, other seasons offer plenty of deals.

Winter may be frigid, but with fewer tourists, hotels, restaurants, and Broadway shows offer great discounts (like Restaurant Week, when some of the city’s finest restaurants serve affordable prix-fixe menus, or two-for-one tickets during Broadway Week).  Summer is not only a great time to enjoy the city’s parks and beaches, but there is ample free culture, including Shakespeare in the Park, concerts by the Metropolitan Opera and NY Philharmonic, the Bryant Park Film Festival, Central Park’s SummerStage, Lincoln Center Out of Doors, and the River to River Festival.

Most flights to New York arrive at JFK or Newark airports, which are both about 15 miles from Manhattan.  Taxis can be expensive, but frequent buses ($15) and air Trains (JFK: $7.25, Newark: $12.50) are affordable. The M60 city bus connects LaGuardia Airport and Manhattan in less than 30 minutes for just $2.25.

This is definitely the toughest area to find a bargain.  There are several hostels in Manhattan, but if dorm rooms aren’t your style, there are three YMCAs that offer tiny private rooms with shared bath for $39-$104.  They are conveniently located in Midtown East, Harlem, and the Upper West Side – right beside Central Park.  If you prefer more amenities, there are a number of reasonably-priced hotels just across the river in Long Island City (Queens) and western Brooklyn which are only a few minutes to Manhattan by subway.

Most of NYC’s food staples, like bagels, hot dogs, and pizza slices, are cheap and filling.  Traditional deli sandwiches (try a hot pastrami or corned beef on rye) can be pricey, but they’re big enough to be shared or make two meals. Fill up on lunch, when many restaurants offer good deals (a great choice in Chinatown and Little Italy).

The city’s gourmet Food Trucks, serving everything from barbeque to lobster rolls and desserts, can be a delicious, cheap option. The mobile app Tweat.it provides real-time locations of Food Trucks in your area. Finally, during warm weather, gather picnic supplies at markets like Zabars, Fairway, or one of the local Farmers’ Markets and head to the park.

Most of NYC’s greatest sights are free.  There is no cost to visit Times Square, Rockefeller Center, Central Park (including free tours), the Brooklyn Bridge, Grand Central Terminal, the 9/11 Memorial, and neighborhoods like Greenwich Village, Soho, and Harlem.  The Statue of Liberty and Ellis Island are free, but there is a cost for the ferry.  For a terrific view of both, take the free Staten Island Ferry or the ferry to Governor’s Island (a calm retreat in the summer).

The choices are plentiful.  Many museums (including the Metropolitan) accept “suggested donations” or offer “pay-what-you-can” or free days/hours.  Same-day, half-price tickets for Broadway shows can be purchased at three TKTS booths, and many shows have cheap “rush” tickets or lotteries on the day of performance.  Half-price tickets to Lincoln Center performances can be found at the David Rubenstein Atrium, and the Metropolitan Opera has $25 rush tickets (good Orchestra-level seats).  Carnegie Hall also offers $10 same-day Rush tickets.

Tapings of television shows like Saturday Night Live, the View, Late Night with David Letterman, the Daily Show, and Late Night with Jimmy Fallon all have free tickets (although they must be reserved well in advance through the show’s website.)

A ride on the subway or buses is only $2.25, and transfers within two hours are free.  Fares for flights to New York from Boston, Washington D.C., and Philadelphia can vary considerably. An alternative is bus lines like Megabus, BoltBus, and Greyhound, which have cheap fares (usually under $25; sometimes as little as one dollar).

As you can see, if you know where to look, you’ll find plenty of incredible bargains in New York City.

Jeff Dobbins is a writer living in New York City.  He has written a book and lyrics for musicals, and scripting for celebrity awards shows and Metropolitan Opera Radio.  In his checkered past, Jeff has worked as an actor, Ballroom Dance Instructor, disgruntled waiter, tour guide, spear-carrier in the opera, and, don’t judge…Santa Claus at Macys.